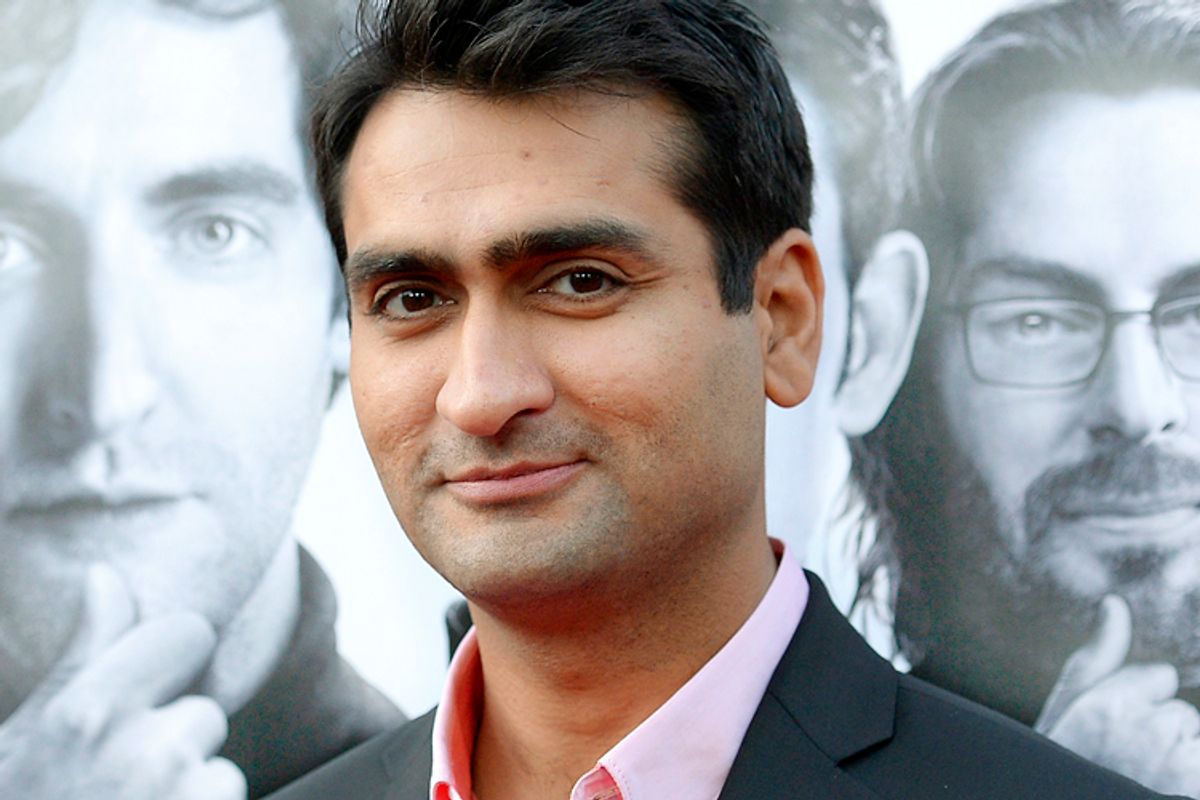 Mike Judge's sly new comedy "Silicon Valley" may revolve around programmer-turned-entrepreneur Richard (Thomas Middleditch), but it's his group of hardcore, socially awkward programmer buddies who make the show feel so wackily original. Kumail Nanjiani's Dinesh, a brilliant programmer whose confidence verges on cockiness, is arguably one of the most fun characters to watch -- and Judge's production team must have agreed, as they wrote the part specifically for Nanjiani after he auditioned. Salon may be biased, though, as we named the actor our “Sexiest Man” of 2013. In any event, we spoke to Nanjiani to get his thoughts on comedy, Colbert and the real Silicon Valley.

First of all, how has your life changed since being named Salon’s sexiest man?

[Laughs] I mean, you know, I’m getting free coffee at Starbucks every day now. My cat’s nicer to me. She’s got this vibe now like, “Oh, you’re Salon’s sexiest guy. I shouldn’t bite his foot for any reason."

Smart cat. So I was surprised to hear that the producers wrote your role in after you auditioned, considering you’re a major character.

Yeah. Martin Starr (who plays Gilfoyle) and I both auditioned for different parts. I auditioned for Big Head and Erlich, I believe. And I think Martin auditioned for Erlich and things didn’t go right for the roles, but they liked us and they were like, “These guys feel like they could be programmers.” So they wrote these parts for us.

On that note: Sure, the show is satire, and every character is a stereotype in some way, but does it bother you to see yourself described as the token brown guy on the show?

I don’t like the term “token,” because they’re just people of color. When we put this “token” on them, I think it reduces the person and the character to just their race. I don’t like the idea that people looked at the billboard, saw a brown guy, and just called them the token brown guy without knowing anything about the character. I don’t think he’s a stereotypical character. I think he’s a real guy who fits into that world, that it's believable that he would be friends with these guys, that his character develops. You’ll see in the last three episodes, he develops more. I never thought of him as a token brown guy. I just think of him as a guy who's just a guy. What is it about my character that makes you think it’s token?

I mean, Gavin Belson talks about finding the right mix of people, and points to Dinesh as “the East Indian guy."

Ha, nope. Though I do feel a bit like that is Dinesh's role within the world of the show -- to be that guy.

I think Episode 5 tackles a lot of the race stuff, where Erlich is trying not to be racist but he comes from this place where there’s a little bit of ignorance. He’s trying to do the right thing, but he doesn't really quite have all the knowledge he can to do the right thing. And I think that’s how a lot of people, in my experience, treat my race. The other day someone was like, “Hey, I really like that shirt. Did you get it from India?” And they just said that -- it wasn’t somebody I knew.

But that to me was, you know, that person wasn’t trying to be bad, but they just have a basic lack of knowledge or ignorance or something. I think a lot of times people will relate to people just based on how they look, and you know we make judgments of people all the time like, “This is a good-looking person so they’re going to be like this.”

Yeah. I don’t see my guy as a stereotypical guy. Like you said -- I wouldn’t say we’re all stereotypes. It’s maybe that we’re all archetypes, and that’s how most shows start.

There’s another brown guy on the show, Aly Mawji, and I forget what the name of his character is [Aly Datta], but he’s one of the programmers and nobody ever treats him [differently] -- he could have been a white guy, and none of the dialogue would have to change. So I think the creators of the show are very thoughtful about race. They’ve put a lot of thought into it and it’s something that’s really important to some to get it right.

Right. And I have to mention, since it's something we've covered a lot over here, that I was interested to see how vocal you were in your criticisms of the #CancelColbert movement. It made me curious to hear more of your thoughts about race and comedy.

I think part of the reason I didn’t like the hashtag is that there is no real nuance to it, which I think is a lot of the issue with Internet discussion -- it’s not really a discussion. It’s just people sort of taking turns having a pulpit and stating their views, screaming them. I thought the #CancelColbert hashtag had no nuance to it and I watched the piece that the tweet referenced.

The quote got taken out of context, and if you watch the piece, even if you didn’t like the joke, you’ll see that even the intention of the joke was never to be offensive. What he was doing was pointing out something that obviously nobody would ever say and saying, "Well, this thing that is obviously offensive is different from this Redskins thing that should be just as offensive. Just because, unfortunately, we don’t have as many people around who would be offended by the term 'Redskins' doesn’t mean it’s not offensive." So you might disagree with the way he tried to make the point. But I don’t think anyone can argue that the point he’s trying to make is actually a really great point.

You studied computer science in college. What is it like playing somebody that you could potentially have been in another life? Was that a weird glimpse into some parallel universe for you?

Ha, I don’t think I ever was going to be a computer programmer just because I wasn’t good at it.

The show certainly has its share of insufferable tech moguls. Who do you think is the biggest villain in the real Silicon Valley?

I know that there was a guy recently who was one of the big VCs that said the persecution of the rich in America is like the persecution of the Jews during the Holocaust. That’s a pretty villainous thing to say. I forget the guy’s name [Tom Perkins]. But there are a lot of these people who are high up who have a ton of money and aren’t really connected to anything else anymore. It’s hard to sort of be grounded when you are so rich and so divorced from reality and everybody around you just wants a piece of you.

So did you end up learning anything about the real Silicon Valley while making this show?

Yeah! These guys did so much research to see how that part of the country is set up. And that there are these VCs on top who are sort of these superstars in this bubble of theirs. It’s a little bubble, but it’s very powerful.

One of the running themes in the show is that everyone has an app, and I think that’s sort of how it is. I mean, we showed it in Silicon Valley. Everyone had an app that they were pitching.

What kind of feedback have you gotten from the tech industry?

They seem to really like it. Obviously, I read one article where the guy was like, “Oh, they never showed them coding. That’s what coders do. They code. So it’s not accurate.” I’m like, well, that’s not going to be an interesting show.