The Bay is burning! Google Glass, techno-rage and the battle for San Francisco's soul

The advent of Google Glass has started an incendiary new chapter in tech's culture wars. Here's what's at stake 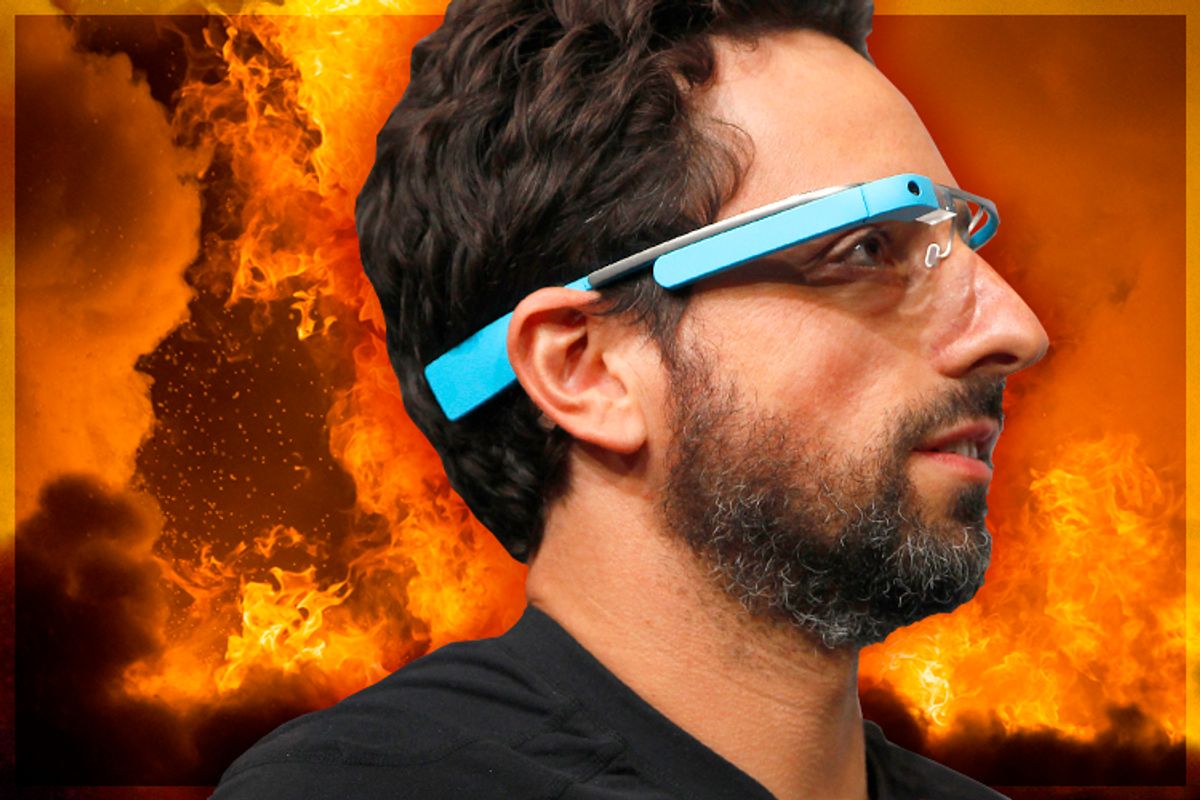 In San Francisco, the tech culture wars continue to rage. On April 15, Google opened up purchases of its Google Glass headgear to the general public for 24 hours. The sale was marked by mockery, theft and the continuing fallout from an incident a few days earlier, when a Business Insider reporter covering an anti-eviction protest had his Glass snatched and smashed.

That same day, protesters organized by San Francisco's most powerful union marched to Twitter's headquarters -- a major San Francisco gentrification battleground -- and presented the company with a symbolic tax bill, designed to recoup the "millions" that some San Franciscans believe the city squandered by bribing Twitter with a huge tax break to stay in the city.

We learned two things on April 15. First, Google isn't about to give up on its plans to make Glass the second coming of the iPhone, even if it's clear that a significant number of people consider Google Glass to be a despicable symbol of the surveillance society and a pricey calling card of the techno-elite. Second, judging by the march on Twitter, the tide of anti-tech protest sentiment has yet to crest in the San Francisco Bay Area. The two points turn out to be inseparable. Scratch an anti-tech protester and you are unlikely to find a fan of Google Glass.

What's it all mean? Earlier this week, after I promoted an article on Twitter that attempted to explore reasons for anti-Glass hatred, I received a one-word tweet in response: "Neoluddism."

The Luddites of the early 19th century are famous for smashing weaving machinery in a fruitless attempt to resist the reshaping of society and the economy by the Industrial Revolution. They took their name from Ned Ludd, a possibly apocryphal character who is said to have smashed two stocking frames in a fit of rage -- thus inspiring a rebellion. While I can't be certain, I suspect that my correspondent was deploying the term in the sense most familiar to pop culture -- the Luddite as barbarian goon, futilely standing against the relentless march of progress.

But the story isn't quite that simple.Yes, the Luddite movement may have been smashed by the forces of the state and the newly ascendant industrialist bourgeoisie. Yes, the Luddites may never have had the remotest chance of maintaining their pre-industrial way of life in the face of the steam engine. But there is a version of history in which the Luddites were far from unthinking goons. Instead, they were acute critics of their changing times, grasping the first glimpse of the increasingly potent ways in which capital was learning to exploit labor. In this view, the Luddites were actually the avante garde for the formation of working-class consciousness, and paved the way for the rise of organized labor and trade unions. It's no accident that Ned Ludd hailed from Nottingham, right up against Sherwood Forest.

Economic inequality and technologically induced dislocation? Ned Ludd, that infamous wrecker of weaving machinery, would recognize a clear echo of his own time in present-day San Francisco. But there's more to see here than just the challenge of a new technological revolution. Just as the Luddites, despite their failure, spurred the creation of worker-class consciousness, the current Bay Area tech protests have had a pronounced political effect. While the tactics range from savvy, well-organized protest marches to juvenile acts of violence, the impact is clear. The attention of political leaders and the media has been engaged. Everyone is paying attention.

If you live in San Francisco, you may have seen them around town: Decals on bar windows that state "Google Glass is barred on these premises." They are the work of an outfit called StopTheCyborgs.org, a group of scientists and engineers who have articulated a critique of Google Glass that steers cagily away from the half-baked nonsense of Counterforce.

I contacted StopTheCyborgs by email and asked them how they responded to being called "neoluddites."

"We are technologically sophisticated enough to realize that technology is politics and code is law," continued Winters. "Technology isn't some external force of nature. It is created and used by people. It has an effect on power relations. It can be good, it can be bad. We can choose what kind of society we want rather than passively accepting that 'the future' is whatever data-mining corporations want."

"Basically anyone who views critics of particular technologies as 'luddites' fundamentally misunderstands what technology is. There is no such thing as 'technology.' Rather there are specific technologies, produced by specific economic and political actors, and deployed in specific economic and social contexts. You can be anti-nukes without being anti-antibiotics. You can be pro-surveillance of powerful institutions without being pro-surveillance of individual people. You can work on machine vision for medical applications while campaigning against the use of the same technology for automatically identifying and tracking people. How? Because you take a moral view of the likely consequences of a technology in a particular context." [Emphasis added.]

The argument made by StopTheCyborgs resonates with one of the core observations that revisionist historians have made about the original Luddites: They were not indiscriminate in their assaults on technology. (At least not at first.) They chose to destroy machines that were owned by employers who were acting in ways they believed were particularly economically harmful while leaving other machines undamaged. To translate that to a present-day stance: It is not hypocritical for protesters to argue that Glass embodies surveillance in a way that iPhones don't, or that it is hypocritical to critique technology's impact on inequality via Twitter or Facebook. Every mode of technology needs to be evaluated on its own merits. Some start-up entrepreneurs might legitimately be using technology to achieve a social good. Some tech tycoons might be genuinely committed to a higher standard of life for all San Franciscans. Some might just be tools. So Jack Winters of StopTheCyborgs is correct: The deployment of different technologies have different consequences. These consequences require a social and political response.

This is not to say that ripping Google Glass from the face of a young reporter, or otherwise demonizing individuals just because they happen to be employed by a particular company, is comparable to Ned Ludd's destruction of two stocking frames. But Glass is just as embedded in the larger transformations we are going through as the spinning jenny was to the Industrial Revolution. By taking it seriously, we are giving "the second machine age" the respect it deserves.

The question is: Is Google?

I tried to find out from Google how many units of Google Glass had been sold during the one-day special promotion. I received a statement that read, "We were getting through our stock faster than we expected, so we decided to shut the store down. While you can still access the site, Glass will be marked as sold out."

I followed up by asking how Google was coping with the fact that its signature device had become a symbol of tech-economy driven gentrification.

"It’s early days and we are thinking very carefully about how we design Glass because new technology always raises new issues," said a Google spokesperson. "Our Glass Explorers come from all walks of life. They are firefighters, gardeners, athletes, moms, dads and doctors. No one should be targeted simply because of the technology they choose. We find that when people actually try Glass firsthand, they understand the philosophy that underpins it: Glass let's you look up and engage with the world around you, rather than looking down and being distracted by your technology."

You can hear an echo here of Ned Ludd in the statement that "new technology raises new issues." But the rest is just marketing zombie chatter, about as useless in its own way as some of the more overheated and unhinged rhetoric from the more extreme dissident wings of Bay Area protest. When a group styling itself "Counterforce" shows ups at the home of a Google executive, demands $3 billion to build "anarchist colonies" and declares, as Adrianne Jeffries documented in Verge, that their goal is to "to destroy the capitalist system ... [and] ... create a new world without an economy," well, good luck with that. We are a long way from "the precipice of a complete anarcho-primitivist rebellion against the technocracy."

One thing seems reasonably clear: Moms and firefighters might be wearing Google Glass, but if Ned Ludd were around today, he'd probably be looking for different accessories.