As our democracy continues to crumble, here's why anti-government zealots are gaining more attention -- and favor 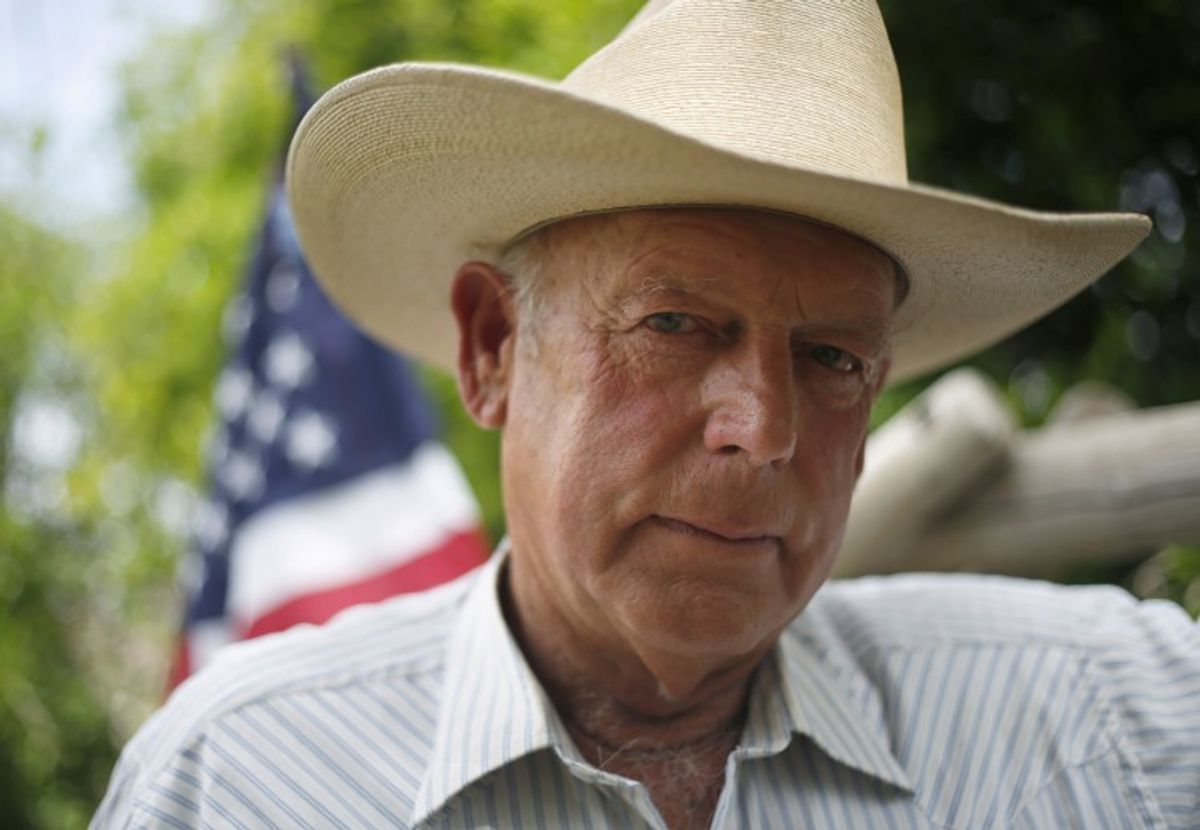 Armed U.S. rangers rounded up cattle on federal land in Nevada in a rare showdown with Cliven Bundy, a rancher who has illegally grazed his herd on public lands for decades. (Reuters)
--

He may be a good rancher, but after having spent the better part of the past week enduring his presence in the media and becoming familiar with his philosophy of government, I feel quite comfortable when I say that Nevada’s Cliven Bundy is a godawful political theorist. His understanding of how American democracy is supposed to work is a total mess, and his complete lack of faith in the legitimacy of the federal government is even worse. But in this, unfortunately, he’s far from alone. And perhaps most discouragingly of all, there’s reason to believe that the aged cowboy — with his libertarian populism and his all-consuming hatred of the federal government — is actually onto something.

Bundy is currently in the midst of a standoff with the federal government over his refusal to pay taxes for grazing his cattle on federal land. But while he’s been squabbling with the government through the court systems for some 20 years — insisting the land is not rightfully owned by the U.S. and thus cannot be regulated by it either — the contretemps exploded into a national news story only recently, after the feds tried to possess some of Bundy’s law-breaking cattle and were greeted by a bunch of pro-Bundy and anti-government protestors, many of whom had guns.

What drew these fine gentlemen to Bundy’s cause? The video of a federal official using a stun-gun on one of the rancher’s adult children surely didn’t help. But police brutality and abuse of power is a normal occurrence in America today, and you don’t see a dozen armed and stone-faced guys show up to the rescue every time someone in the Bronx makes a “furtive movement” and suddenly finds themselves slammed against a brick wall with a police baton jammed into the small of their back. So that’s not it, not really.

Much more likely, the Bundy boys have swooped in to make employees of the Bureau of Land Management’s lives terrible because they support Bundy’s vision of political liberty, which he’s argued undergirds his entire years-long conflict with Uncle Sam. “I abide by all of Nevada state laws,” Bundy said during a recent radio interview. “But I don’t recognize the United States government as even existing.” And it’s this nonexistent federal government that, in Bundy’s telling, stands in the way of his exercising all of his natural rights. “[W]e are after freedom,” Bundy has also said. “We're after liberty. That's what we want.”

And while this all sounds rather odd and eccentric to most of our ears, for a small but passionate community of anti-government extremists, Bundy’s comments aren’t dangerous or incoherent. On the contrary, in their reckoning, the senior-citizen rancher is speaking principled truth to illegitimate power. He’s calling bullshit on a system that’s strayed from its foundational values and codified immoral behavior that should be against the law. As ex-sheriff and current Bundy supporter Richard Mack put it during an interview on right-wing radio, Cliven Bundy’s faceoff with the feds “was Rosa Parks refusing to get to the back of the bus.”

Needless to say, the prospect of responding to this melodramatic and messianic crankery with ridicule is extremely tempting. And when you consider the fact that the Nevada Constitution, which Bundy claims to hold sacred and well above its federal counterpart, explicitly demands its adherents recognize the supreme authority of the federal government, that temptation becomes more seductive still. But while it’d be fun to respond to the Bundy set by cracking jokes about black helicopters and Agenda 21, it’d be a mistake to dismiss the Cliven crew’s success thus far entirely. There’s a reason they’ve gotten so much attention and spurred so much enthusiasm, especially on the right. Their prescriptions are wrong, but in their limited way, they’ve recognized the disease.

That disease is a growing sense of distrust of the government, which according to Gallup is reaching levels unseen in nearly 20 years. Americans have always been famously suspicious of government, of course, but even for America, having eight out of 10 people say they rarely or never trust the end-result of the democratic system is bad. And one of the reasons this intensifying mistrust is so worrisome is that it’s so obviously justified. Indeed, anyone who's lived through the past 15 years of American politics — with the secret spying, the secret incarcerations, the secret torture, the secret drone strikes, and the secret indifference to the economic fortunes of the 99 percent — and still trusts their government wouldn’t just be naïve. They’d be a fool.

Two developments this week offer a useful glimpse of how the cynicism animating Bundy-styled populism is supported by a thin rail of truth. One involves Larry Summers, the former treasury secretary, Harvard president, and presidential economic advisor who in so many ways embodies Washington, D.C., as it functions in the modern era. The other features a major new report from two academics — one from Princeton, the other from Northwestern — who tried to figure out who, exactly, calls the shots in the U.S. and whose policy wishes are listened to by the White House and Congress. Put both stories together, and you begin to see where today’s pervasive anti-government sentiment is coming from.

To take the Summers example first, check out this recent report from the Boston Globe on Sen. Elizabeth Warren’s upcoming memoir. The Globe piece isn’t a full review of the book but rather a sneak peek at some of its more interesting passages. The portion of the report that most stood out to my eyes concerned a story Warren tells of a 2009 dinner she had with Larry Summers, before she was a senator and before he had left the Obama White House. After an uneventful meal, Warren writes, Summers decided it was time to bestow some advice upon his fellow Harvard alum.

“He teed it up this way,” Warren writes. “I had a choice. I could be an insider, or I could be an outsider.” Outsiders got to say whatever they wanted, Summers reportedly explained, but it’s the insiders who really matter — and they don’t care what outsiders think. “But insiders also understand one unbreakable rule,” Summers added, according to Warren. “They don’t criticize other insiders.” In retrospect, Warren concludes, “I had been warned.” Assuming the story is true, Summers could not have provided a better anecdote to confirm Washington’s cliquey and insular division of power if he had tried.

But besides one another, whom do insiders listen to? This is where the Princeton/Northwestern study comes in. Authored by Princeton’s Martin Gilens and Northwestern’s Benjamin Page, the new study concludes that the U.S. political system is not a democracy, as Americans tell themselves and are from a young age frequently told, but rather an oligarchy, a system completely dominated by a vanishingly small group of highly wealthy interests. “Americans do enjoy many features central to democratic governance, such as regular elections, freedom of speech and association and a widespread (if still contested) franchise,” they write in their conclusion. “But we believe… America's claims to being a democratic society are seriously threatened.” Essentially the only time when the general population’s desires are reflected in public policy, the authors find, is when those desires are shared by elites. And when the people differ with their wealthy betters, it’s generally the latter that end up getting what they want.

Now, I seriously doubt that Cliven Bundy and his pals have read this report, or Elizabeth Warren’s soon-to-be-released book. And I further doubt you’d be able to persuade them to focus on class and accountability rather than big government and states’ rights. But even if the Bundy bunch don’t care about inequality, the radical right-wing populism they represent wouldn’t be so appealing to so many Americans if they, too, didn’t believe that on a fundamental level the game was rigged and the government wasn’t on the up-and-up. So long as America is an oligarchy run by insiders like Larry Summers, the pull of angry and populist libertarianism will not slacken and the view of the federal government as an alien usurper will not fade. Cliven Bundy is just the beginning.