"Murmur," "Document" and "Automatic" are great, but R.E.M.'s last albums are underappreciated gems. Here's a guide 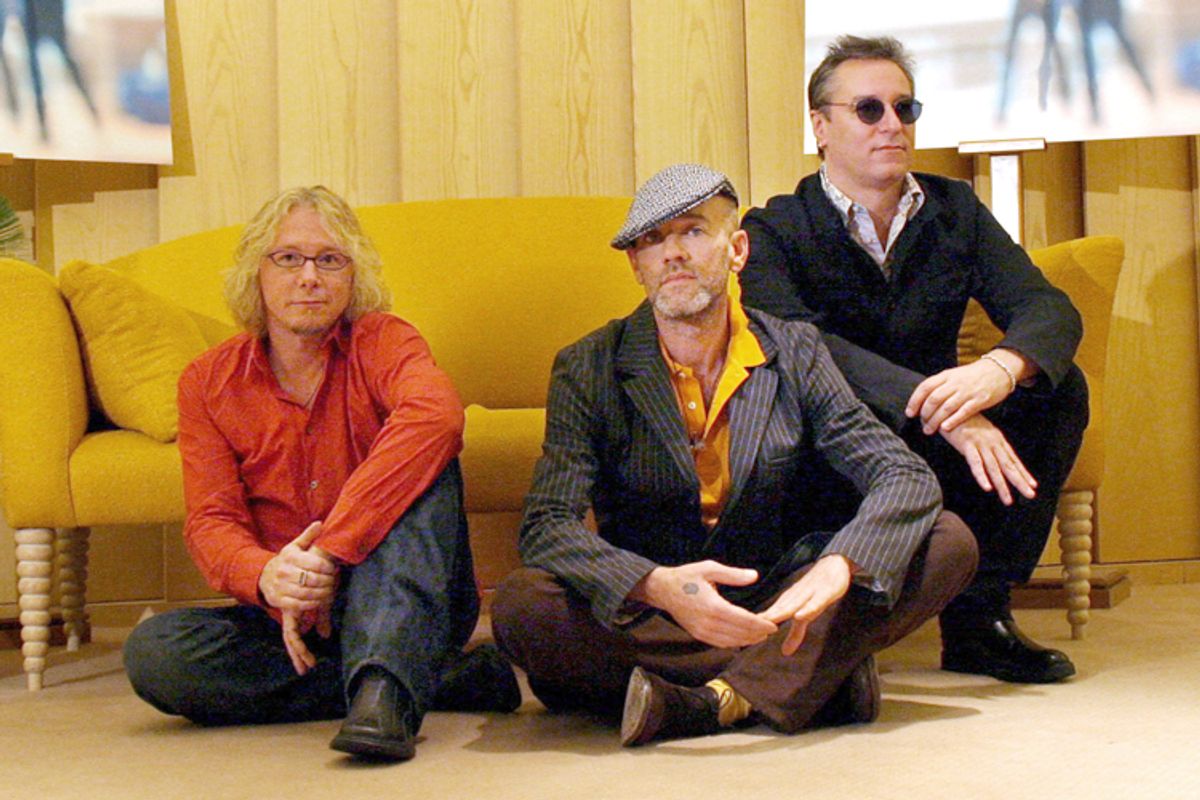 For Record Store Day today, R.E.M. is releasing a limited-edition four-LP collection, "Unplugged: The Complete 1991 and 2001 Sessions." Recorded a decade apart, the two shows have striking differences. The R.E.M. of 1991 was fresh off the release of the No. 1 album "Out of Time," but still clung tight to their earnest college rock roots — even as it was clear they were on the cusp of a mature creative breakthrough. The R.E.M. of 2001 was now an established mainstream draw, but was certainly at a crossroads, trying to figure out where to go next.

Part of this crisis stemmed from the fact their cerebral, intricate music was out of step with prevailing trends. But the ongoing concern was achieving balance after the departure of drummer Bill Berry. At the time he left, vocalist Michael Stipe was quoted as saying, "I guess a three-legged dog is still a dog, it just has to learn to run differently." Four years after this amicable decision, Stipe, Peter Buck and Mike Mills were still learning how to find their footing and create without him.

In 2001, that process had already produced some interesting (and uncharacteristic) music. 1998's "Up" was a murky, keyboard-tinted record that found beauty in feeling unmoored, while that year's "Reveal" delved deeper into electronic textures, beats and remixes. During the following years, R.E.M. continued to obliterate their comfort zones and rebel against their past selves — with admittedly mixed results — before finally reaching equilibrium with 2011's "Collapse Into Now."

Still, the argument about R.E.M.'s post-Berry output continues to be a heated one, nearly two decades after his departure. In reality, R.E.M. without Berry was simply a different band with different chemistry. Examining their catalog in this light reveals some real gems, cuts that stand tall next to any of the band's beloved early work. Below are 10 of the best post-Berry songs.

R.E.M. tended to make bold statements with the first track on a given album. In the post-Berry era, that hadn't changed: 2001's "Reveal"immediately erased the darker sonic textures of "Up" with "The Lifting," a lighter-than-air psych-pop song on which orbiting synths zap around scrambled sound effects and strident piano. Surging vocal melodies and key changes contribute to the tune's head-in-the-clouds atmosphere — and create a cumulative effect of emotional exhale and release from tension.

To say 2004's "Around The Sun" is critically maligned is putting it mildly; even among many hardcore fans, the record rarely merits a defense. However, time has been kind to many of the album's songs, including the futuristic, anxious second track "Electron Blue." Layers upon layers of vivid keyboards — which sound like everything from percolating coffee to buzzing fluorescent lights — intertwine with faint hints of chiming guitars and quivering strings. The resulting music is otherworldly, and intoxicating in the way it quells fear of the unknown with delicate calm.

Perhaps it's not surprising that the uncertainty surrounding "Up" produced lyrics focused on finding order and logic within chaos. The stream-of-consciousness-like "Hope" attempts to reconcile scientific and religious beliefs with the more nebulous ideas of faith and the supernatural. And although the song draws no concrete conclusions, the tinny drum machine and childlike keyboard drones make these philosophical musings hypnotizing.

On the surface, "Imitation of Life" certainly sounded like good ol' bittersweet R.E.M. jangle-pop. But the "Reveal" single was a far cry from the scrappy, angsty rock of the band's youth: Sugary strings, swampy keyboards and glossy production — not to mention a loping pace and cheer-up lyrical attitude — mean "Imitation of Life" is one of R.E.M.'s most life-affirming moments.

"Living Well Is the Best Revenge"

2008's "Accelerate" was a "return to form" in the sense that R.E.M. sounded galvanized by global and political injustices. The raucous opener "Living Well Is the Best Revenge" is a scornful, spite-filled song itching for action to combat idiocy: "Well, I'm not one to sit and spin/'Cause living well's the best revenge."  While the tune is a showcase for Buck's buzzsawing riffs, its true secret weapons are Mills' nimble, lively bass lines and vocal countermelodies.

As the name implies, "Hollow Man" is full of self-doubt and self-reproach. In fact, the protagonist is rather torn up about losing depth and authenticity, and is longing to get back in the good graces of others: "You trusted me, I want to show you/I don't want to be the hollow man." This urgency and desperation only benefit the "Accelerate" song, however; the dynamic song segues from sparse verses to barnstorming choruses with sunny-side-up guitars.

"At My Most Beautiful"

The piano-heavy, intricate Beach Boys homage is one of R.E.M.'s most direct songs — and a love song to boot. But the emotional honesty works remarkably well, mainly because the vulnerability pushes Stipe to be concise and pointed, leading to detail-rich lines such as, "At my most beautiful, I count your eyelashes secretly/With every one, whisper I love you."

A staple of the band's later tours, "Walk Unafraid" harkens to the troubled guitar jags and biblical references of 1985's "Fables of the Reconstruction." However, the protagonist of this "Up" highlight brings world-weary confidence and clear-eyed conviction to the song's lyrics. An elegant allegory, "Walk Unafraid" espouses the idea of living a fearless life, even if this path is different: "They claim to walk unafraid, I'll be clumsy instead."

In the twilight of their career, R.E.M. glammed up their sound here and there, in a style reminiscent of 1994's "Monster." The "Collapse Into Now" cut "Alligator_Aviator_Autopilot_Antimatter" is the best of these glitter bombs: Buck's metallic garage-guitar glints underneath a hollering vocal duel between Stipe and guest Peaches. Although the pair's bravado masks lyrics cut through with insecurity ("I have, have got a lot to learn"), the song has devastating swagger.

As far as swan songs go, 2011's "Collapse Into Now" was pretty much note-perfect; the album neatly tied a bow on R.E.M.'s legacy by nodding to all eras and styles of the band. Perhaps the album's finest, most affecting moment is the deceptively simple "It Happened Today."  The song's prominent musical elements – proud acoustic guitar, wordless dueling harmonies from Mills and Stipe, and folksy percussion — seem basic. But buried underneath this foundation are dozens of sonic ideas, in the form of (to name a few) dulcimer, mandolin, glockenspiel and pianos. It's the best kind of R.E.M. song: one whose nooks and crannies reveal new nuances with each listen.