Before the bridal thong

Honeymoons weren't always such sexy affairs. They began as a trip with friends to lessen the “trauma” of marriage 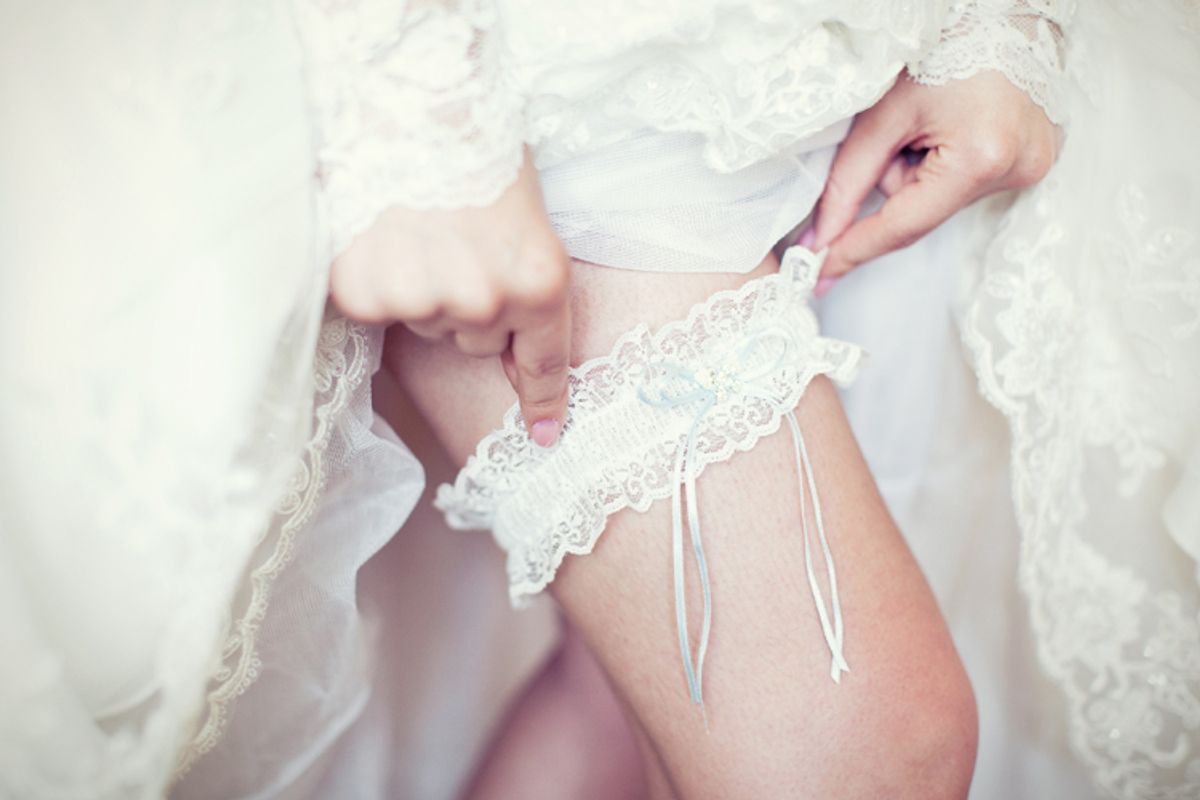 We were in a bar in Kyoto when the bartender pointed at us and matter-of-factly said, "You are honeymoon." By way of explaining his insight, he explained that his fiancée had just broken off their engagement. Then pulled a ring box from behind a bottle of whiskey.

Despite the cruel love-detecting powers of heartbreak, I was surprised he could tell that we were honeymooners. After all, we barely could.

Sure, we had been conspicuously cuddling in a corner, but it had been five months since the wedding. We had already adjusted to calling each other "husband" and "wife" (as much as two modern feminist-minded liberals can). My wedding dress had been retired to the back of the closet, the messily scrawled thank-yous had been sent out and the staged photos of us awkwardly pressing our faces together had been developed. Not only that, but as is true for an increasing number of couples these days, neither of us were virgins. We already lived together. We had spent many years as single, i...

The concept of a honeymoon seemed so retrograde we could barely say the word without irony. We could not have been much more removed from what I associate with the tradition: innocence, virginity... white panties displaying the word "Bride" in rhinestones. Then again, what did I know about the origin of the honeymoon, this tradition in which we were casually participating? Turns out very little -- as I found out when I called marriage historian Stephanie Coontz and talked about how this practice meant to unite fledgling families has evolved into an excuse for a vacation.

Where did the idea of the honeymoon come from?

The act came about in the early 19th century in both England and America. It might be related to the decline of direct family engagement in marriage negotiations. One of the first roles of honeymoons was as “a bridal visit.” You went and visited other relatives, basically introducing each other to them. Originally, they were almost like a period to ease the transition into coupledom. Women often brought a relative or friend along. You would visit other friends or family and bring along a female companion.

Women brought friends with them on their honeymoon?

That needs to be put in context. At the same time as there was this huge increased emphasis on the couple relationship and being in love -- instead of marriage as a utilitarian arrangement -- you were getting a redefinition of male and female roles. That was a reaction to the fears of instability, because once marriage is based on love, how do you keep people married? I think in part, as a probably unconscious reaction to that, love got redefined, and male and female roles got redefined. The idea became that men and women are total opposites and they need each other to complete each other. The man is believed to need a woman to have access to emotions and caregiving; and the woman, who is increasingly defined as economically dependent, rather than a coproducer on the family farm, needs a man to have access to the practical parts of life.

In some ways, it was a very good arrangement for making men and women think that they needed each other, but in other ways it turned them into strangers. Lots of research shows that one of the results was a sense of marriage trauma on the part of women.

I found lots of letters from the 19th century where women would refer to men as the grosser sex -- and this is totally unlike the past. There was a sense of, “I have so much more in common with other women, how will I make this transition to this guy who I need but don’t understand at all?” I suspect that honeymoons arose -- totally unlike we think of them today, as getting away from your friends and family to focus on your own sexual intimacy -- it was like, “Let’s slow down this traumatic transition.”

How has the meaning of the honeymoon changed over time?

In the early 20th century, people began to see the downsides of the division of labor and the rigid sexual distinction between nurturing females, sexless females, virtuous females, and then males being all the opposite of that. There began to be a real emphasis on sexual adjustment, on getting mutual sexual pleasure. In the early emerging profession of marriage counseling, people began urging the man and the woman to go [on vacation] together, to make time and effort for this.

This is not something men thought of much before the 20th century. In fact, when the first marriage advice book came out for men by Marie Stopes, she got letters from men saying, “Thank you so much, I would never have initiated foreplay with my wife for fear she would think I was treating her like a mistress.” So this sexual tension and estrangement, which I talk about as a sort of coping mechanism in the early draft of the love-based marriage, began to be a real problem. I think some of the emphasis on the honeymoon came as a result of people saying, “You have to learn to get physically satisfied with each other.”

This, of course, was also completely jumped upon by the emerging resort and vacation industry. Until the 1940s and ’50s, honeymoons and other vacations were usually something that you drove to rather than flew to. Since the 1960s, the new wrinkle has been issued by the travel agency, the airline. You see a lot of these destination weddings where you fly all your guests to the place that you’re going to honeymoon in and then you send them home.

So many couples that marry today have already had sex, they often already live together.

I think sex really just doesn’t play the same role anymore at all. I’ve interviewed women who married as late as the ’50s and ’60s for whom the honeymoon was extremely traumatic. It was the first time they had sex. Now it’s really not going to be traumatic for most women and men. I know a lot of people who go back to work after the wedding. It’s a short wedding, but a really expensive one, and they go back to work. The honeymoon has just become an excuse for a vacation at this point.

And it’s an excuse to get a discount from a hotel. Everyone advises that when you’re booking you mention that you’re on your honeymoon so that you get special treatment.

And you get it. We’re all sentimental about people embarking on a new life together.

What I’ve seen in several wedding invitations is, “Don’t give us a gift but contribute to our honeymoon.” I have been surprised by how often I’ve seen that in the past five years. Yes, it’s just a vacation, but it’s one that gives you an excuse to ask people to help you pay for it and treat you better during it.