"Game of Thrones" glamorizes rape: That was not consent, and rape is not a narrative device

There was no consent in a brutal "Game of Thrones" scene. It's time for rape to stop being cable's narrative device 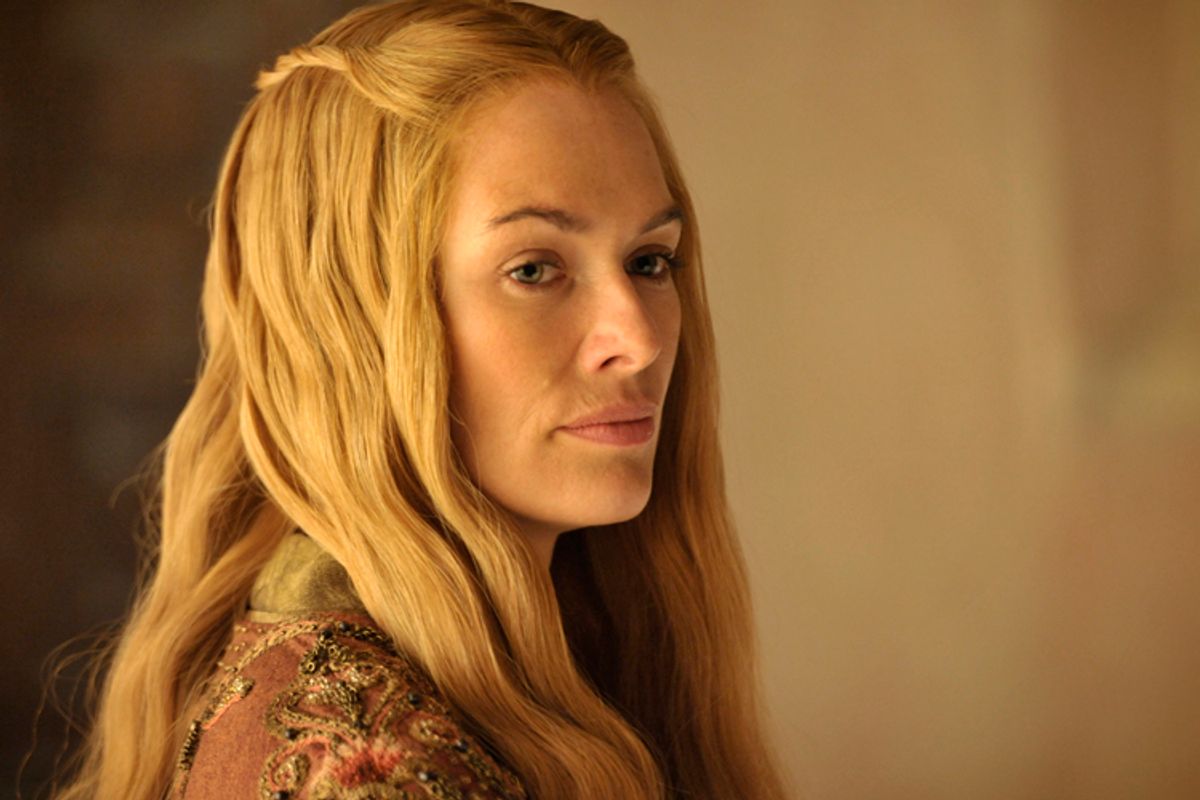 Last night’s "Game of Thrones" episode “Breaker of Chains” was shocking, which is saying something in a show that has consistently expanded the threshold for shocking us. Sure, some of the show’s most perverse scenes come from George R.R. Martin’s brain. But the show runners continue to take strange liberties with the source material, particularly when it comes to sexual violence.

At this point, audiences have come to expect that there are no limits to the brutality these characters will be forced to endure. At its best, “Game of Thrones” tempers this brutality by embroiling its very compelling characters in all manners of intrigue. At its worst, “Game of Thrones” makes brutality seem gratuitous, unremarkable and, at least within this fictional world, inevitable.

In last night’s episode, Cersei was raped by her brother and lover Jaime, next to the corpse of their son Joffrey. Jaime was enraged because Cersei had asked him to kill Tyrion Lannister, their brother, whom she blames for the murder of Joffrey. There was no ambiguity to the scene. Cersei repeatedly said no. She said, “Stop.” She said, “Not here.” She said, “This is not right.” She resisted Jaime’s efforts, to no avail. The scene was unequivocally a rape scene and it was not merely shocking. It was thoroughly senseless. The episode’s director, Alex Graves, said, of the scene, “Well, it becomes consensual by the end, because anything for them ultimately results in a turn-on, especially a power struggle.” He goes on to add, “That’s one of my favorite scenes I've ever done."

Whatever Graves’ artistic intentions may have been, something went terribly wrong here. What ended up on the screen was sensationalized rape. In the books, Cersei and Jaime do, indeed, have a sexual encounter as Joffrey’s corpse lies in repose, and that scene is rough — but Cersei’s consent is clear. It is curious that the show once again decided to take a consensual sexual encounter, as written in the books, and turn it into rape for the television audience. It’s a shame that they knew they could take this liberty without consequence.

Plenty of smart people are talking about the episode and the show’s overall treatment of women as disposable objects onto whom physical and emotional violence are relentlessly enacted. Sexual violence is so pervasive on the show that nearly every woman on the show has been raped or threatened with rape. The show, and the books, reveal the disturbing and cavalier facility with which rape becomes a narrative device. Rape is used to punish. Rape is used to make a woman more sympathetic or to explicate their anger or other unlikable qualities. Rape is used to put women in their place.

“Game of Thrones” may be uniquely extreme, but it is far from the only recent TV show to use rape to prop up narrative. We saw rape used as an explicatory plot device in ABC’s “Scandal” when we learned that Mellie was raped by Big Jerry, her husband Fitz’s father. This trauma, the show made it seem, explained why Mellie was so hardened, so craven in her ambitions, so impenetrable to her husband. Shonda Rhimes, whose work I largely admire, is no stranger to this narrative tactic. She introduced a rape story line to “Private Practice,” in which confident and hard-edged Charlotte King was brutally raped in her office and then several episodes were given over to King’s attempts to overcome her trauma. This device has also been used in “Mad Men,” “House of Cards,” “Breaking Bad,” “The Sopranos” and “Downton Abbey.” There is no end in sight.

In some ways, it’s useful for television shows to acknowledge the extent of sexual violence in our culture. These narratives allow necessary stories to be told. But the execution is too easy. From daytime soap operas to prestige cable shows, rape is all too often used to place the degradation of the female body and a woman’s vulnerability at the center of the narrative. Rape is used to create drama and ratchet up ratings. And it’s rare to see the brutality and complexity of a rape accurately conveyed on-screen. Instead, we are treated to an endless parade of women being forced into submission as the delicate and wilting flowers television writers and producers seem to want them to be.