Insidious political cliché alert: Stop saying it's all about the kids

"For-the-children" rhetoric is appalling, dishonest -- and allows both parties to get away with inaction 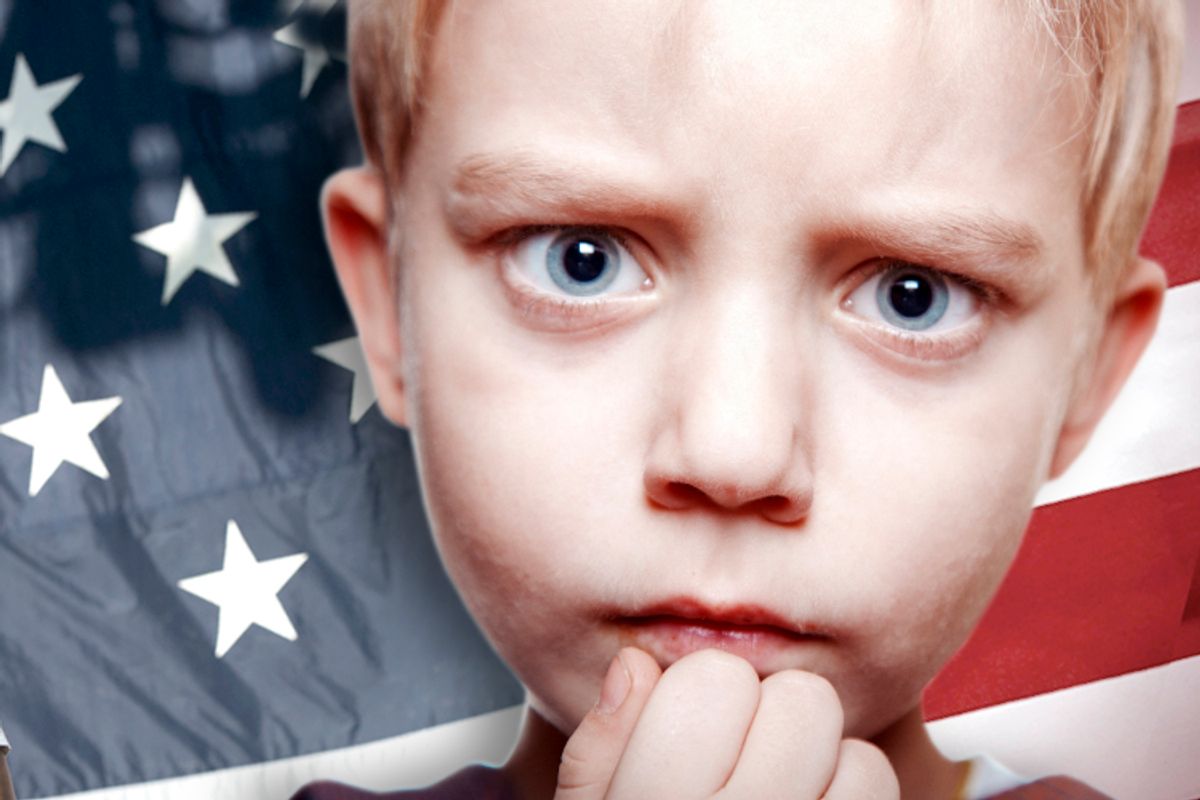 Whitney Houston sang, “I believe that children are our future,” which is a fair sentiment, but I am continually dismayed at the way so many of our politicians encourage us to focus on the future to such an extent that we completely forget what can be done in the present.

Last week, in the car on the way to the airport, I caught an interview on NPR with Sen. Elizabeth Warren about her new memoir, "A Fighting Chance." I’ve been a fan of hers since she helped create the Consumer Financial Protection Bureau in 2008, but her answers to interviewer David Greene’s questions made me like her even more.

“The job of any regulatory agency should be to represent the people, not the industry that it regulates,” she said. Check.

“Look, we all make these investments together and that's what makes us richer together,” she said. Check.

“We've got to make our voices heard here. We can't let Washington be run by big corporations and billionaires,” she said. Check.

“It's about the future for our kids,” she said. Wait, really? Ugh, no.

That final answer was like a scratch in an otherwise smooth record. Everything she’d said up to that point had been applicable to all American citizens, adults and kids, right here in the present. She did not need to make that rote and tired appeal to children of the future, and yet she — like virtually every other politician on either side of the aisle — did.

It made me think, as I do every time I hear a politician say it, that we need to banish that kind of inherently static, do-nothing, pass-the-buck, futurist, for-the-children rhetoric from our political discourse once and for all.

Saying something is important “for the children” as opposed to just important in the moment in which we all are living sells all American citizens short, both in this present instant and in the future to which these politicians refer.

For-the-children rhetoric has the same unpleasant and status-quo-preserving ramifications as the old Christian idea of “This world is not my home, I’m just passing through,” meaning: Sure, we may be surrounded by strife, inequality, pain and injustice here on earth, but that’s OK because our future home is in heaven and our reward will come later.

To which I say: No, thanks — give us our social justice now, not after we’re all too dead to appreciate it. We should aspire to make heaven a place on earth, Belinda Carlisle-style.

To be clear, of course I also want prosperity, health and happiness for hypothetical, not-yet-existing future generations, but I want it to start now. To leave it for the kids pushes the responsibility off of us and onto them, and that is unfair. We owe it to ourselves to create better lives today.

Personally, I don’t have kids, nor do I intend to, but my distaste for and distrust of this for-the-children rhetoric is not based on any mere literal-minded interpretation. Whether you intend to reproduce or not, to say the world must get better for-the-kids is a problematic frame, be it actual or metaphoric. Give us all, childed or childless, our democracy and our rights while we’re still alive, not decades from now when it does us no good.

At best, this for-the-children rhetoric is passive, saying, “Well, somehow, things — the environment, racism, civil rights, the pay gap — will get better down the line.” It leaves hard-to-combat problems up in the air where some mysterious and benevolent force — the Time Fairy, essentially — will bring about progress for us. This lets us, the people existing in America right now, off way too easily.

At worst, this for-the-children rhetoric is an active pawning off of responsibility, saying, “Well, our unborn generations will work hard to figure all this out after we’ve been unable to.” It shrugs the task from our present-day shoulders, placing the crushing burden on those who don’t even exist yet.

Because here is the thing: For-the-children rhetoric is dishonest. A patent lie. It says, basically, “We don’t know what’s wrong, we haven’t figured it out yet, but down the road at some unspecified point in time, someone else will.” That’s ridiculous. We do know what’s wrong — racism is bad. The gender-based pay gap is bad. Unregulated financial rapaciousness on the part of banks and industry is bad. Rampant environmental degradation and destruction are bad. We are far from ignorant of the problems that require our national attention.

What for-the-children rhetoric permits is for everyone — Democrats, Republicans, independents or otherwise — to stick their heads in the sand and act like these things are somehow incomprehensible mysteries because we’d prefer not to start the hard thinking and heavy lifting these issues require. We know, for example, that polluting our drinking water with chemicals and heavy metals is terrible; we just don’t want to stop because continuing is profitable. We want our children to stop, while giving ourselves an excuse to keep engaging in execrable behaviors indefinitely. And that’s appalling.

So in short, I’m not saying we shouldn’t make this nation and this world a better place for the children. I’m saying we should start making them better immediately, for ourselves, and by extension for everyone who will follow after us (if we don’t screw things up so grotesquely that no one will be able to follow).

To be against for-the-children rhetoric is not to be against kids, but rather is to be against the vile rhetorical murder that that phrase subtly but undeniably perpetrates upon all of our rights to live freely, healthily and well right here in this present moment.

Any time a politician is about to say we should do something “for the children,” he or she should remember, as Martin Luther King Jr. said, that, “We are now faced with the fact that tomorrow is today. We are confronted with the fierce urgency of now. In this unfolding conundrum of life and history, there is such a thing as being too late.”

Kathleen Rooney is a former Senate Aide and a Visiting Assistant Professor of Poetry at DePaul University. Her debut novel, O, Democracy!, has just been published.

Editor's Picks Elizabeth Warren It's All About The Kids Parenting