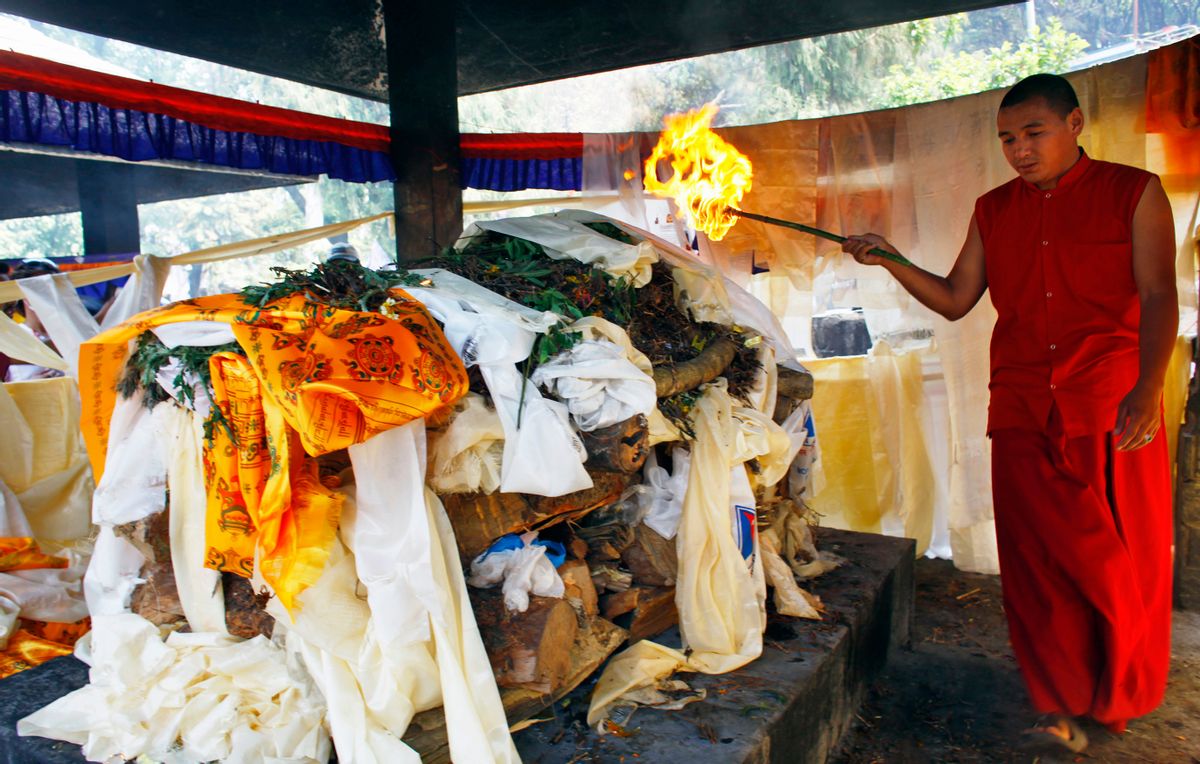 A Buddhist monk lights the funeral pyre of Nepalese mountaineer Ang Kaji Sherpa, killed in an avalanche on Mount Everest, during his funeral ceremony in Katmandu, Nepal, Monday, April 21, 2014. Buddhist monks cremated the remains of Sherpa guides who were buried in the deadliest avalanche ever recorded on Mount Everest, a disaster that has prompted calls for a climbing boycott by Nepal's ethnic Sherpa community. The avalanche killed at least 13 Sherpas. Three other Sherpas remain missing and are presumed dead. (AP Photo/Niranjan Shrestha) (AP)
--

KATMANDU, Nepal (AP) — Buddhist monks cremated the remains of Sherpa guides who were buried in the deadliest avalanche to hit Mount Everest, a disaster that has prompted calls for a climbing boycott by Nepal's ethnic Sherpa community.

A Sherpa boycott could critically disrupt the Everest climbing season, which is key to the livelihood of thousands of Nepali guides and porters. Everest climbers have long relied on Sherpas for everything from hauling gear to cooking food to high-altitude guiding.

At least 13 Sherpas were killed when a block of ice tore loose from the mountain and triggered a cascade that ripped through teams of guides hauling gear. Three Sherpas missing in Friday's avalanche are presumed dead.

"Right now, I can't even think of going back to the mountain," said Tashi Dorje, whose cousin was killed. "We have not just lost our family members, but it is a loss for the whole mountaineering community and the country."

Hundreds of people lined the streets of Nepal's capital, Katmandu, on Monday as the bodies of six of the victims were driven in open trucks decorated with Buddhist flags.

During the cremation ceremony, dozens of nuns chanted for the victims' souls to be released as the bodies were covered in pine branches. A daughter of one of the climbers fainted and was taken to the hospital.

While the work on Everest is dangerous, it has also become the most sought-after work for many Sherpas. A top high-altitude guide can earn $6,000 in a three-month climbing season, nearly 10 times Nepal's $700 average annual salary.

The avalanche came just as climbing was to begin in earnest, with mountaineers set to begin moving above base camp and slowly acclimatizing to the altitude on the world's highest mountain. Most attempts to reach the 8,850-meter (29,035-foot) summit occur in mid-May, when weather is at its most favorable.

Since the avalanche, the Sherpas have expressed anger that there has not been a bigger response from Nepal's government, which profits from the permit fees charged to the climbing expeditions.

Ang Tshering of the Nepal Mountaineering Association said Sherpa guides are considering a climbing boycott to press their demands. Without the guides, it would be nearly impossible for expedition teams to continue.

Tshering said there were about 400 foreign climbers from 39 expedition teams on the mountain and equal number of Sherpa guides, along with many more support staff such as cooks, cleaners and porters in the base camp.

The Tourism Ministry, which handles the mountaineering affairs, said Monday it has not been told of any cancellations by expedition teams.

The government has announced an emergency aid of 40,000 rupees ($415) for the families of the deceased climbers, but the Sherpas are demanding better treatment.

The "Sherpa guides are heating up, emotions are running wild and demands are being made to the government to share the wealth with the Sherpa people," said a blog post by Tim and Becky Rippel. Tim Rippel, an experienced Himalayan guide and owner of the Canada-based guiding company Peak Freaks, was at base camp when the avalanche happened.

The post said many Sherpas were frustrated by their tiny share of the millions of dollars that flow into Nepal as a result of the climbing industry.

"Things are getting very complicated and there is a lot of tension here and it's growing," the Rippels wrote, adding of the Sherpas: "They are our family, our brothers and sisters and the muscle on Everest. We follow their lead, we are guests here."

On Monday, Deputy Prime Minister Prakash Man Singh said the government has been working to help the Sherpas since the rescue began. "We will do what we can, keeping with the standard practice to provide compensation," he said.

Sherpa Pasang of the Nepal National Mountain Guide Association said they have handed over a list of demands to the government seeking 10 million rupees ($10,400) for the families of dead, missing and injured Sherpa guides in immediate financial aid. They also want assurance that the government will bring regulations to protect them in the future.

"The government has made no big response even after a big tragedy like this. Until they hear our pleas we will continue to put pressure," he said, adding they plan to meet top government officials later in the week.

Hundreds of people, both foreigners and Sherpas, have died trying to reach the summit, and about a quarter of the deaths occurred in avalanches, climbing officials say.

The previous worst disaster on Everest had been a fierce blizzard on May 11, 1996, that killed eight climbers, including famed mountaineer Rob Hall, and was memorialized in a book, "Into Thin Air," by Jon Krakauer.

More than 4,000 climbers have reached the top of Everest since 1953, when the mountain was first conquered by New Zealander Edmund Hillary and Sherpa Tenzing Norgay.