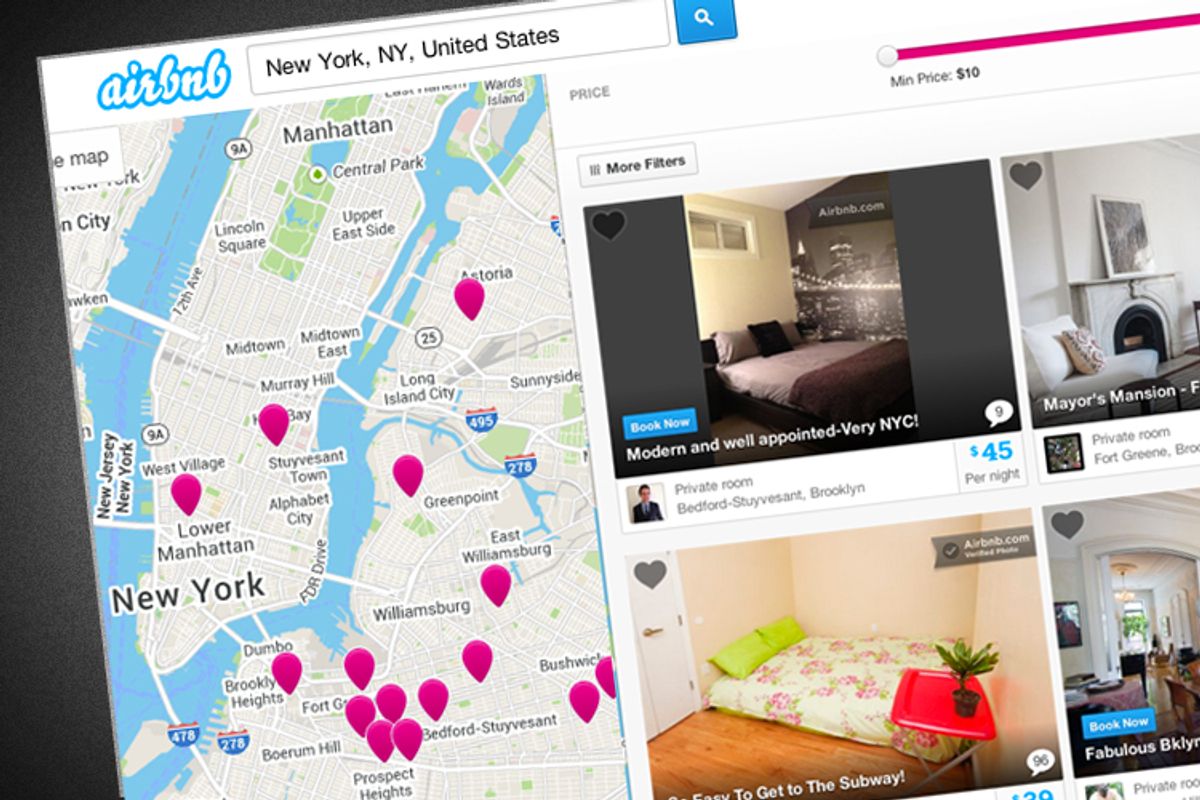 Airbnb was in court in New York on Tuesday, battling with the state attorney general over the question of how much information about its "hosts" the company should be required to reveal to the state. The case has attracted much attention, because New York is simultaneously one of Airbnb's biggest markets, and its most fiercely fought battleground with regulators. There's plenty at stake -- not least of which is Airbnb's brand-new $10 billion valuation, following a $500 million round of investment that closed last week. In 2013, Airbnb pulled in $250 million in revenue from its thousands of hosts. That's real money.

Real money, in the "sharing" economy.

Airbnb and its advocates argue, with some justice, that the current laws regulating short-term rentals are outmoded and don't fit the new business models nurtured by cloud computing and smartphones. That's undoubtedly true, though as the New York Times' David Streitfeld wrote in a smart piece on Tuesday, the regulatory mess is at least partially the result of the fact that for "sharing economy" companies, "questions about safety, taxes and regulation have tended to be an afterthought." Silicon Valley sees no problem with breaking the law first, and then lobbying to fix it later.

A "crowd-funded" ad organized by Peers.org, an outfit that advocates for sharing economy companies and was co-founded by an executive of Airbnb, declares that "we're asking lawmakers for more sharing, not less. We want to play by the rules, but New York needs laws that are safe, fair, and clear. Support sharing. Fix the law."

It would be nice if the Peers ad clarified that in the case of Airbnb, "sharing" actually means "short-term rentals," but that horse left the barn a long time ago. Whatever we call  what happens when one person rents out living space to another, there is little doubt that there is significant political support, particularly among younger people, for a regulatory structure that is more friendly to how Airbnb conducts business. In Silver Lake, a Los Angeles neighborhood that has been witnessing its own Airbnb regulatory showdown, a slate of supporters of Airbnb rentals won election to a neighborhood council last week.

But everyone agitating for laws more friendly to Airbnb should take a closer look at some of the details of the New York legal struggle. In the New York Times, Streitfeld points out that when the state attorney general's office investigated exactly who was posting listings on the Airbnb platform, it discovered a funny thing.

On Jan. 31, there were 19,522 listings for New York City properties on Airbnb from 15,677 hosts, according to data the attorney general submitted to the court. But nearly a third of the listings were from only 12 percent of the hosts.

One Airbnb landlord had 127 listings in Manhattan on a single weekend last fall. Sixteen other landlords had at least 15 listings each.

By no stretch of the imagination can this be properly considered the "sharing economy." The data prove that nearly a third of Airbnb's New York listings were generated by landlords who were cashing in on the ability to make a profit from offering short-term hotel rentals without having to pay the normal costs borne by the hotel sector -- taxes, safety compliance and so on.

Now, if I were one of the people mobilized by Peers.org to contact my congressional representative or state senator to lobby for laws more accommodating to Airbnb, I might look at those numbers and wonder what, exactly, I've been supporting.

Airbnb responded to the data with a purge. On Sunday, Airbnb's director of public policy, David Hantman, noted in a blog post that the company was rushing to clean up its listings.

But when we examined our community in New York, we found that some property managers weren’t providing a quality, local experience to guests. These hosts weren’t making their neighborhood stronger and they weren’t delivering the kind of hospitality our guests expect and deserve. In some cases, they were making communities worse, not better. We took a hard look at our community in New York to identify these hosts and we took action.

Earlier this year, we began notifying these hosts that they and their more than 2,000 listings would be permanently removed from the Airbnb community. While we are allowing these hosts to support their existing bookings, all are now prohibited from accepting new reservations and if you search for a place to stay in New York, you won’t find these listings.

Fair enough. But let's not be naive. Would Airbnb be engaging in a mass cleanup of its listings if it hadn't been on the receiving end of close government scrutiny? Remember -- New York is one of Airbnb's largest markets and the company raked in revenue of $250 million in 2013. A significant chunk of that revenue must have come from absentee landlords maximizing their income from multiple properties. That's real money, and Airbnb was happy to accept it ... until it became politically unfeasible to do so.

Why is any of this important? Because it's worth understanding that over the last couple of years, when Airbnb has rallied political support for its business model by declaring, flat out, that it is pioneering a better way for humans to relate to each other, that it has been building trust between strangers and helping people struggling in a tough economy earn some extra dollars, and that "sharing" a room is somehow morally better than paying for a hotel room, what the company has also been doing is making quite a bit of money off absentee landlords who have been exploiting its platform to offer hotel-like services without conforming to hotel regulations. And it seems pretty clear, in the New York case, that the company didn't start seriously cleaning up its listings until real political pressure was brought to bear.

Airbnb provides a service that people clearly want. It is inevitable that the rules will be modified to provide room for its operations. Cloud computing and smartphones allow for much more efficient allocation and coordination of resources, and the existing hotel industry will be forced to adapt. That's cool.

But we've also been told, repeatedly, that we should trust the sharing economy to regulate itself, because, somehow, it will be in the market's best interest not to misbehave. But the record shows that the short-term rental economy will not regulate itself; that it will, instead, seek to make as much money as it can while the getting is good. Until someone pays attention.