"It becomes consensual by the end": What "Game of Thrones" exposes about America's twisted view of rape

The myth that nonconsensual sex becomes consensual is everywhere. And our cultural tastemakers are partly to blame 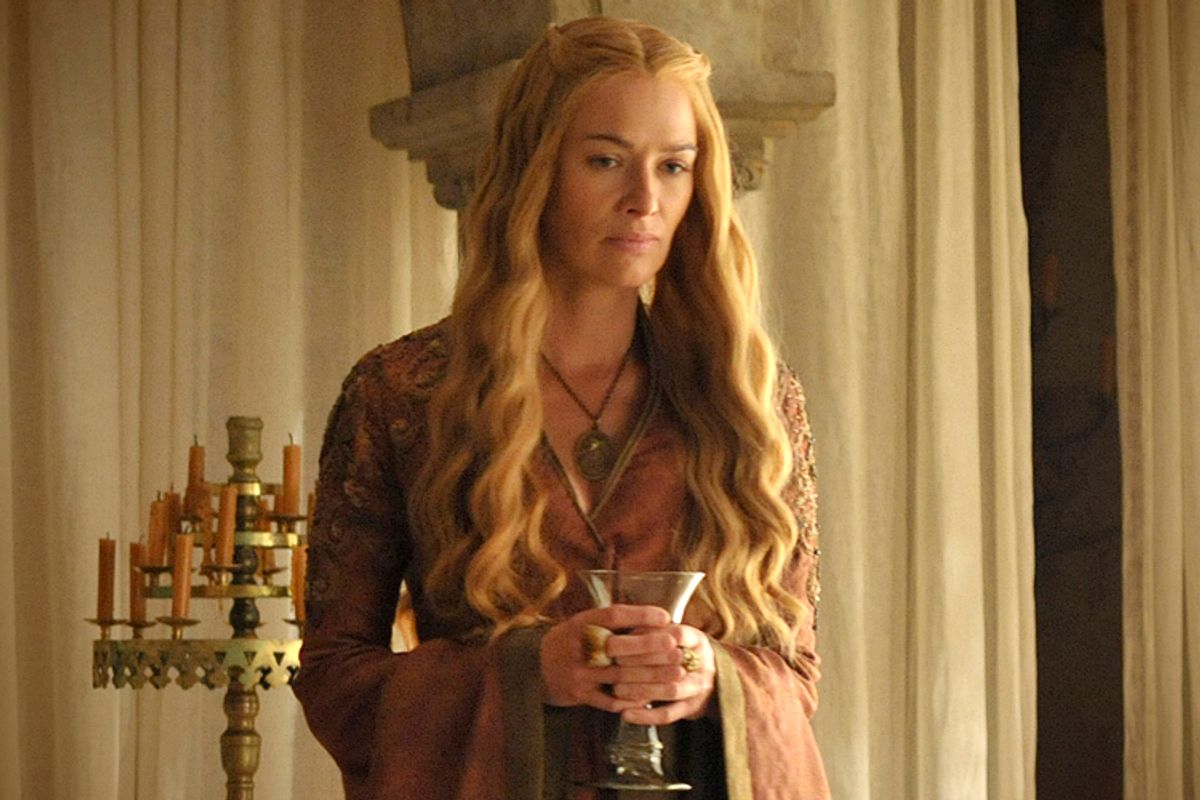 Lena Headey as Cersei Lannister in "Game of Thrones" (HBO)
--

On "Game of Thrones" this week, Jaime Lannister raped his sister Cersei while she told him, "no," "it's not right," "please no," and "not here." When asked by television writer Alan Sepinwall if he viewed the scene as rape, director Alex Graves said, "Well, it becomes consensual by the end."

My first instinct upon reading this was to tweet something about a facepalm and move on. (My second instinct, which I indulged, was to rest my forehead on the cool glass of my desk for about a minute while contemplating why everything must be so terrible all of the time.) Graves has been catching a deserved amount of shit over what he said, but his comment has continued to stick with me because this idea that rape can "become consensual" is actually pretty common. In fact, this casual quote from a TV director unwittingly tells us quite a lot about what our culture thinks about rape.

A model named Emma Appleton tweeted a message on Sunday that she claimed was from photographer Terry Richardson offering her a Vogue shoot in exchange for sex. This is a blatant act of sexual coercion, and only the most recent (in fact, seemingly tame by comparison) in a series of disclosures from other women who have previously worked with Richardson. In March, model Charlotte Waters wrote a painfully detailed account of her alleged assault at Richardson's hands, and the response from the fashion industry was a collective shrug. In response to the most recent allegations against him, Vogue said that it had no plans to work with Richardson, but he remains one of the wealthiest and most successful photographers in the industry. (Hell, he even has his smiling likeness featured in a charity egg hunt going on around Manhattan right now. Children pose for pictures with the thing.)

The guy is utterly mainstream. And an alleged serial rapist. But Richardson keeps working because the editors, designers, and celebrities he shoots just don't view his actions as rape. And they don't believe the women -- overwhelmingly young models who lack the industry connections and clout that Richardson enjoys -- who tell them otherwise.

Last week, artist David Choe boasted on a podcast that he forced a female masseuse to perform oral sex on him. In an attempt to defend the alleged assault, Choe said that his actions -- while "rapey" -- were not rape, because even though the woman said "no" to his advances, she didn't tell him, "Fucking stop [or] I’m gonna go call security." According to Choe, the woman said "yes with her eyes" and later confessed -- according to his retelling -- that she had a crush on him.

When the Internet called him on it, Choe remained insistent that what he did was not rape. To communicate just how unacceptable he found rape, he said that all rapists should be -- wait for it -- raped. Vice, one of his employers, is currently "reviewing" its relationship with him.

And it isn't just wealthy artists who don't believe in the existence of sexual assault -- at least when it comes to their own behavior. Rape denialism is a universal pastime, enjoyed by young and old. On college campuses across the country, "rape" has been officially rebranded as "nonconsensual sex" in an attempt to defuse what some administrators consider a loaded word. Writers like Caitlin Flanagan argue on the pages of respected publications that most rape is just “regretted sex” on the part of "jilted coeds." In the realm of politics, Virginia state Sen. Richard Black -- currently running for a seat in the U.S. House of Representatives -- doesn't believe that spousal rape should be a crime because he's pretty sure it doesn't exist. Susanna Martinez wanted to require sexual assault survivors to "prove" that their rape was "forcible" if they wanted state-subsidized childcare for a child who was born as the result of sexual assault.

It's a total shit show out there, and it's exacting a pretty heavy toll on all of us. The impact of the cultural erasure of sexual assault on survivors became troublingly clear last week when a study revealed that young girls and women often view sexual violence as normal behavior. When asked to describe her encounters with sexual harassment to researchers at Marquette University, one interview subject said, "They grab you, touch your butt and try to, like, touch you in the front, and run away, but it’s okay, I mean … I never think it’s a big thing because they do it to everyone.” Many of the girls and women interviewed said that they did not report their experiences of sexual violence because they didn't want to make a "big deal" out of them. They told researchers that they didn't come forward about these incidents because they didn't think anyone would believe them.

It's easy enough to understand why.