Forget inequality! Judging by the White House and the media, the real answer is sucking up to the wealthiest 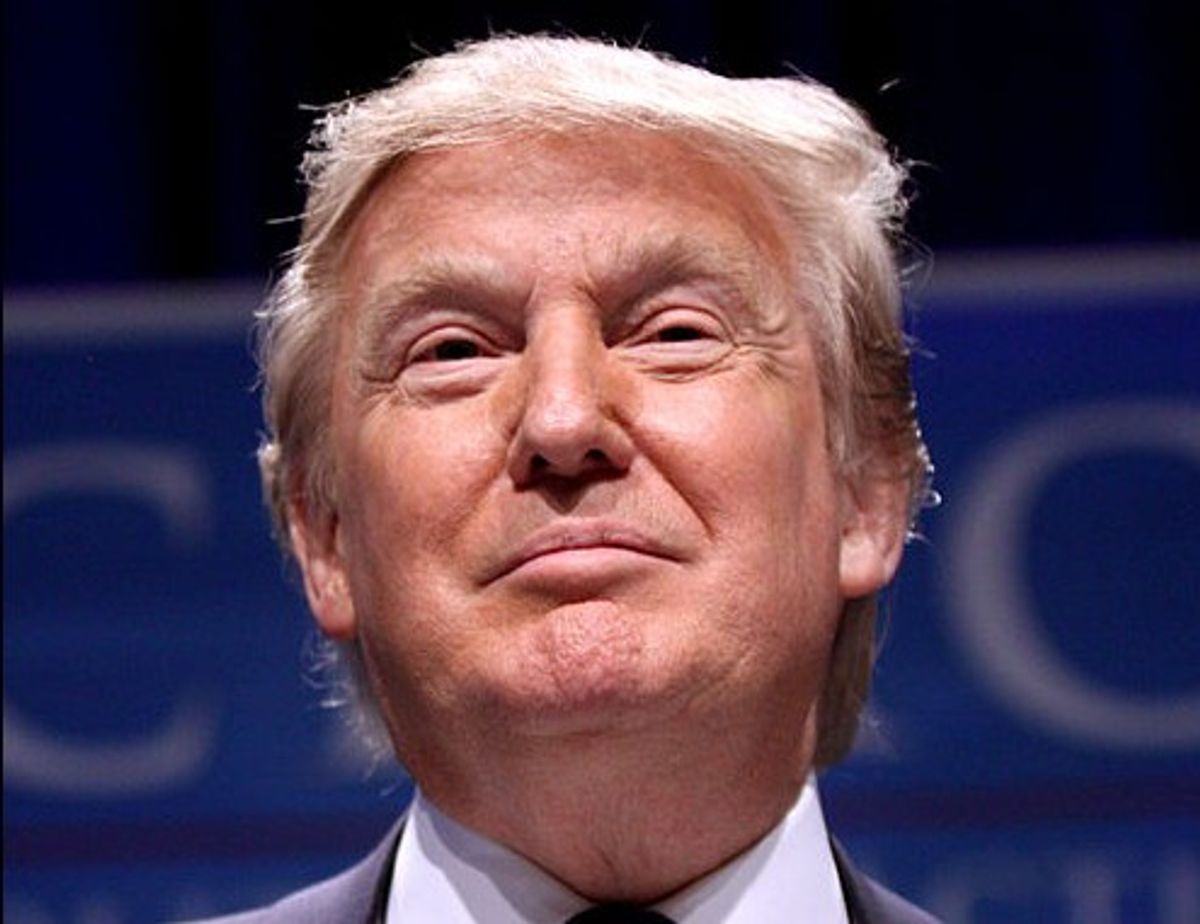 Inequality is a burning topic among economists, especially since the release of Thomas Piketty’s recent book on the subject. Many are questioning whether this is a temporary period of runaway inequality, or whether we are on the verge of an irreversible collapse into extremes of wealth and poverty. (What would we call it? The Oligopolypse? Plutogeddon?)

But numbers alone don’t tell the full story. Culture, too, is adapting to this unequal world. We idealize the wealthy today in ways that would have been unthinkable decades ago.

With the children of today’s baby boomers scheduled to inherit $30 trillion in the next several decades, politicians and the press are hard at work flattering plutocrats of all ages by portraying them as paragons of wisdom. Here are four such portraits:

Don’t think of a blue rhino

Actually – and we’ll say this as kindly as we can – it’s not a very good story. Ms. Hanley met banking heir Matthew Mellon in a very typical way: at a wedding. Not to be outdone on the hyperbole front, however, Matthew quickly steps in: “My breath was literally taken away. I knew instantly. It was a metaphysical overtaking. I called my ex-wife and my mother and said, ‘I met my future wife.’”

Wait. He felt attracted to a new woman and called his ex-wife to tell her? Maybe the rich really are different! Mr. Mellon, whom we are told is a member of Alcoholics Anonymous, even uses the phrase “rocketed to the fourth dimension” – which the AA Big Book uses to describe spiritual recovery – to describe meeting his future wife.

The ostensible reason for the profile was, as the headline explained, to promote “the Mellon lifestyle as a brand.” The Mellons have created a clothing line and a website called www.hanleymellon.com, which features entries like this one:

“Lauren Santo Domingo's choices in dress and design are ALWAYS among the choicest and most admired- so to that let's admire her Lalanne piece featured in Vogue … SPECTACULAR!  Rest assured, anything Lalanne is on my covet list...  Maybe a blue Rhino desk?!!”

That last item is actually a life-size blue metal rhinoceros that doubles as a foldout desk. A copy recently sold for more than $30,000 at auction.

Best moment of unintended irony: From the Times article: “The walls of the pad he and Ms. Hanley Mellon share at the Pierre are lined with paintings by Andy Warhol, Jean-Michel Basquiat, Damien Hirst, Peter Beard and, Mr. Mellon said, ‘Taylor Swift.’”

For today’s scions of inherited wealth, meeting fellow billionaires is almost as good as looking in the mirror.

“I think it’s fantastic,” said a 19-year-old heir to the Carlson hotel fortune. “I’ve never seen anything like this before.” He was speaking about an invitation-only gathering at the White House for “an elite group of 100 young philanthropists and heirs to billionaire family fortunes.”

From the Times: “Justin McAuliffe, a 24-year-old heir to the Hilton hotel fortune, was similarly impressed by the crowd. ‘Hilton, Marriott and Carlson,’ he said. 'That is cool.’”

As the Times’ journalist explains, the event was organized by the White House’s “deputy director for technology and innovation” and Nexus, “a youth organization based in Washington that seeks to ‘catalyze’ the next generation of billionaire philanthropists and other stakeholders.”

About that journalist: his name is Jamie Johnson, and he explains that “although the event was closed to the media, I was invited … to report on the conference as a member of the family that started the Johnson & Johnson pharmaceutical company.”

Jamie’s a competent writer, and he managed to track down that $30 trillion inheritance figure. But, if this becomes a trend, soon only plutocrats will be permitted to report on the plutocracy.

Best moment of unintended irony:  “Mr. Gage was among the presenters at a breakout session, titled 'Combating Human Trafficking,' that attracted a notable group of his peers. 'The person two seats away from me was a Marriott,' he said. 'And when I told her about trafficking, right away she was like, "Uh, yeah, I want to do that."’”

“Delta Innovation Class.” It reads like a parody, but it isn’t. Delta Airlines is "partnering with LinkedIn to connect today's high-profile influencers with the business leaders of tomorrow at 35,000 feet.”

“Individuals interested in the opportunity to fly with a titan in their industry, sharing ideas and discussing goals and future projects, may submit an application.”

In other words, they’ll hook the wannabes up with the powerful and successful – while everybody in the seats around them is forced to listen as the young aspirant makes his or her pitch. A video introduction to the program describes it as “a mentoring program,” and perhaps on its best days it could become that. But have the elites become so inaccessible that one must literally ascend to the heavens to reach them?

Delta officially introduced the program at – where else? – TED 2014. We’re told that Delta’s exhibit there included an exhibit called “Social Soul”:

“This unprecedented, immersive digital experience brings to life a user's personal Twitter feed in a larger-than-life structure where their social media profile is on display in a 360-degree immersive stream of monitors, mirrors and a sound system. Afterwards, Social Soul connects the user to another TED attendee using a custom algorithm that links attendees through their similar interests.”

Thomas Friedman wrote, not one, but two full columns about Google’s head of human resources. The implicit premise, as always with Friedman, was that the billionaire plutocrats of Silicon Valley are wiser than the rest of us … and that they not only can, but should, guide our societies' future development.

It’s not clear why Friedman thinks Google can solve the employment problems of America’s youth. By its own admission, the digital mega-corporation only hires about 100 people per week. Since some of them are replacements, that means it’s likely to hire fewer than 5, 000 people per year – and many of those will already be employed.

Nevertheless, Friedman invites us to join him at the feet of Google’s Laszlo Bock, a former management consultant given to pronouncements like “G.P.A.’s are worthless as a criteria for hiring, and test scores are worthless ... We found that they don’t predict anything.”

Bock is then capable of promptly contradicting himself by adding, “Good grades certainly don’t hurt.”

He’s also capable of mangling the English language in the consultantese style that is so dear to Friedman’s heart, as in: “We assess that using structured behavioral interviews that we validate to make sure they’re predictive.”

(Translation: “We review our questions occasionally to make sure we’re asking the right ones.”)

In an era when higher education is becoming unaffordable for more and more Americans, it’s certainly reassuring to know that at least one corporation isn’t necessarily looking for Ivy League degrees. But it should surprise no one to learn that a corporate executive believes that (in Friedman’s words) “prospective bosses today care less about what you know or where you learned it … than what value you can create with what you know.”

Why should this be considered a new and valuable insight? Perhaps because its source controls a phenomenal amount of money.

If there’s one thing these anecdotes tell us, it’s that the phrase “Money talks” has never meant more than it does today. Nowadays you don’t just buy things with it. It makes you smarter in other people’s eyes. In this increasingly unequal age, it renders the tongue-tied articulate and the shallow profound.

Imagine what it is to be them: The hoi polloi want your fashion tips. The White House wants to brainstorm with you. Young aspirants rise 35,000 feet just to sit at your elbow. Thomas Friedman treats you like a sage. And all you have to do is sit at your blue rhinoceros desk, basking in the admiration and looking forward to a bright future in this best of all possible worlds.