American exceptionalism takes another hit, as does the credibility of the Times' foreign coverage 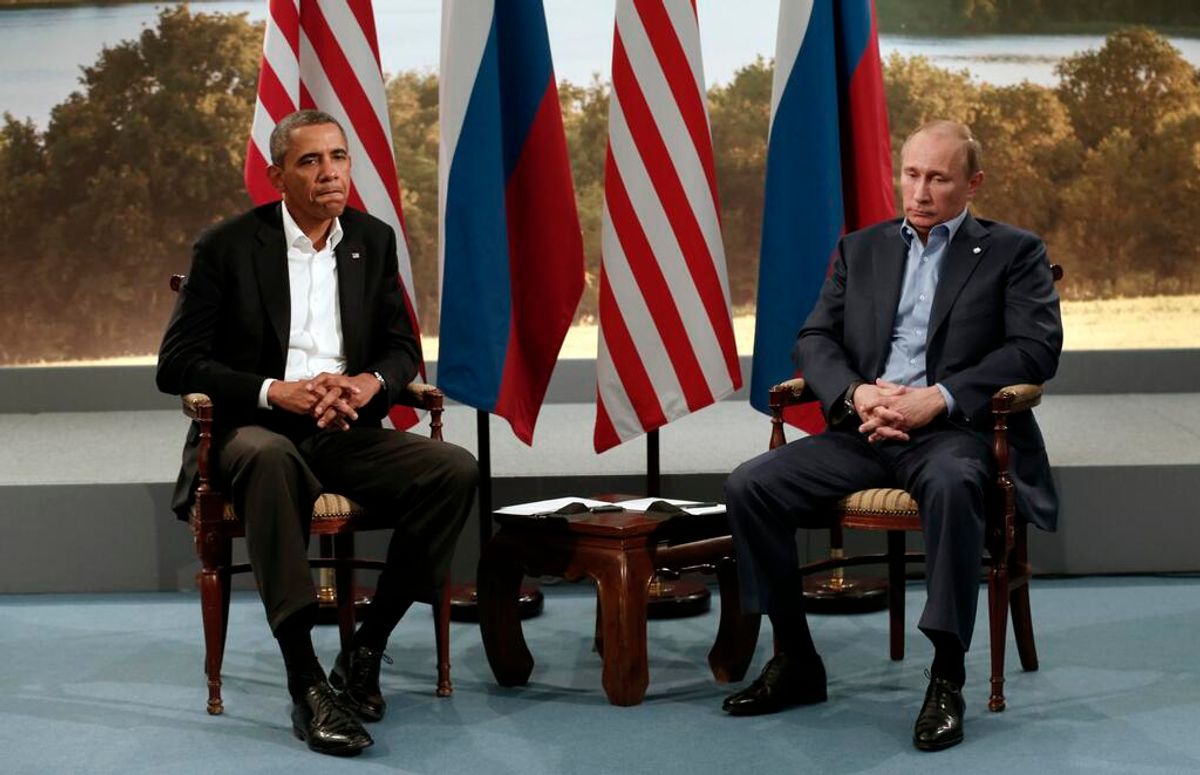 The argument has been made several times in this space that President Obama is as a flyweight in the ring with a counterpuncher such as Vladimir Putin. This is no longer a question of argument or a columnist’s point of view. In the past few days we have the spectacle of Obama effectively surrendering to his Russian counterpart on the Ukraine crisis. Confirming this interpretation of Obama’s new position, announced last weekend, Putin appears to have since allowed himself a modest victory dance.

No, once again, I am not a Russophile. Yes, once again, an American failure in Ukraine will do all concerned a power of good.

This latest turn began last week, when the provisional government in Kiev launched an “anti-terrorist campaign” intended to suppress dissent and pro-Russian sentiment in the eastern portions of the country. It was less than a day before the operation looked like an outtake from “Car 54, Where Are You?”

Ukrainian army units and assorted “security forces” barely reach the city limits in the dozen or so towns and municipalities before they surrendered not only their weapons but also their tanks, personnel carriers and artillery, declaring they had no stomach for a mission against their own people. Read the New York Times account here. If the Times gives us an account such as this, bet on it there is no longer any way to disguise the provisionals’ weak-to-nonexistent hold on the imaginations of something between many and most Ukrainians.

With timing Secretary of State Kerry must have viewed as perverse, the Americans, Europeans, Russians and provos met in Geneva the next day to negotiate a deescalation. They did, but to little result. Pro-Russian forces commanding city halls across the east, saying they signed no such agreement, paid no attention. Washington and Kiev accused Russia of doing too little to call off those in revolt. This may be so, given we cannot tell the extent of Russia’s influence. But it cannot be that most citizens of eastern Ukraine were sleepwalkers awaiting their awakening at the hands of Russian infiltrators.

You will never hear, inversely, about Kiev’s obligation to disarm the thugs who put the provisionals in power because the far-right militants of Right Sektor and Svoboda are what keep the provisionals in power. There was a shootout at a checkpoint in eastern Ukraine last weekend, you may have read. Again, we do not know who did it, but damn it if I can find an explanation more credible than the charge that a Right Sektor militia was responsible.

This was the picture at the weekend, when the Obama people took an extraordinary step. An emanation from the president and his national security folk announced that the new line is simply not to bother with Putin anymore. In the Times account, here, the president’s new focus is on “trying to minimize the disruption Mr. Putin can cause,” “limiting Russia’s expansionist ambitions” and “effectively making it a pariah state.”>

All this is cast as position-of-strength stuff — a powerful man who cannot be bothered with a tin-pot no-account not worth the effort. And there is your clue, the overdrawn pose. (Ukraine is nothing if not a long-running shadow play, you have to agree.) In my reading, Obama has lapsed into a pout. Having had his ears boxed in every encounter with Putin, he seems to have found it feels good when he stops. My upsum: Obama has surrendered all effort to do anything imaginative in the era we call “post-Cold War,” declared this era over, and proceeded to open Cold War II, which the American defense and intelligence communities have hankered after all along.

If this kind of thing passes for smart policy, then my thought that a new century makes new demands on us has been off base from the start. The comfort of the familiar is a famous trope for the uncertain — the child of an alcoholic marrying an alcoholic, and so on — but one wanted to think our leaders, especially Obama, with his claim to superior intelligence, were somewhat beyond this kind of neurosis. It seems not.

I was adjusting to the thought that it is best if our president takes his ball and goes home, even if this means another generation of wasteful tension with the Russians. And what then, but Vice President Biden reappears in the larger theater of this crisis. Joe spent two days in Kiev earlier this week. There is a timing question here.

Less than two weeks ago, CIA director John Brennan went to Kiev, and the provisionals launched their “anti-terror” campaign immediately afterward. Biden arrived Monday and departed Tuesday evening. On Wednesday morning the provisionals announced they will now take another run at the eastern dissidents. You do the math.

We come to the unusually overt confidence Putin now evinces. Speaking on Russian television Wednesday, Putin had this for the Western powers: “To a certain extent, trust has been lost ... But I want to emphasize once again: Russia is interested in growing relations with the United States and will do everything to ensure that this confidence is restored ... We do not intend to spoil relations between Russia and Europe, and we hope that this is not part of our European partners’ plans.”

How do you read this, I wonder. In my view, he seems to be certain enough of his command of the Ukraine crisis to offer a variant of “Don’t go away mad, just go away.” It looks as though he is satisfied that he can put relations with the West on a more equal footing now, if there are to be active relations, and I buy into the good of this without reservation.

This is a transition paragraph. When you finish it, a new topic awaits.

We have had some doozies from our media lately, way above average, and they cannot go unremarked. I wish there were some kind of counter-whatever prize for these guys. They are truly fearless in exploring the bottom of the craft.

The big one, the one with consequences, concerns the famous photographic evidence that the Russians are active on the ground in Ukraine. Proof to back all the allegations to this effect has been wanting, and finally over the weekend, pictures.

The provisionals in Kiev supplied them, but never mind the provenance problems. On Monday the Times reported as follows, leading the paper under a two-column headline:

Now, photographs and descriptions from eastern Ukraine endorsed by the Obama administration on Sunday suggest that many of the green men are indeed Russian military and intelligence forces—equipped in the same fashion as Russian special operations troops involved in annexing the Crimea region in February.

What you have here is a report purporting to relate facts. You are given no reason to question these pictures — the administration, indeed, endorses them. This is the salient stuff. Correspondents and editors are paid to take care with this kind of thing — or not. With me?

OK. In Wednesday’s paper, deep in the bowels of the foreign news section, and deep in the bowels of the story found therein, we learn that the Times took the administration’s word for the validity of the pictures and got it wrong. Sorry. The pictures turned out to have been taken by a freelance photographer in Ukraine and had nothing to do with Russian anything. Reddit helped expose the nonsense.

I grow very sick of this stuff. I hesitate to go ad hominem, but these guys are ripping off my public space, my right to a responsible press. They litter my village green. Michael Gordon, Andrew Higgins, Andrew Kramer — not one of these correspondents has any call on our trust.

The other items are more in the way of fun, and let us have a little.

Late last week David Herszenhorn reported for the Times from Moscow on how the Russian economy is tanking and will only worsen in the face of the West’s onslaught of powerful sanctions. Constructing the usual tedious anecdote, he quoted Margarita Zobnina, a professor of marketing, expressing her “mounting alarm.”

Here is the good part, second paragraph in a piece that, again, led the paper:

Most shocking, she says, is that her local grocery is now selling anchovies packed in sunflower oil rather than olive oil, an obvious response to the soaring cost of imports. “That really freaks me out,” she said.

I just love this paragraph and all the people who had a hand in putting it where it went. And it gets better every time. Here, wait ... Yes, I just read it again. Damn fine pair of sentences.

One more and we clock out.

You have your chaos in Crimea since the Russians annexed it. Timesman Neil MacFarquhar, in another silly anecdote Tuesday in another story leading the paper, tells of Roman Nikolayev, a transportation manager who has retired at 54 (which is not too bad, I would say). Nikolayev wants to get new documents for his daughter and granddaughter. “But he cannot get inside to ask because he is No. 4,475 on the waiting list for passports. At most, 200 people are admitted each day from the crowd churning around the tall, rusty iron gate."

Remember all the “ill-fitting suits” the Soviets use to wear? Well, now there is no gate in Russia that is not rusty. But we give MacFarquhar this kind of hackery. I like the math. At 200 passports a day, it is going to take those Russian bureaucrats 22 days to get everybody their papers.

And this is your story of chaos in Crimea. Things are horrible everywhere.