Why is no one talking about how unflattering Stephen Colbert's glasses are? 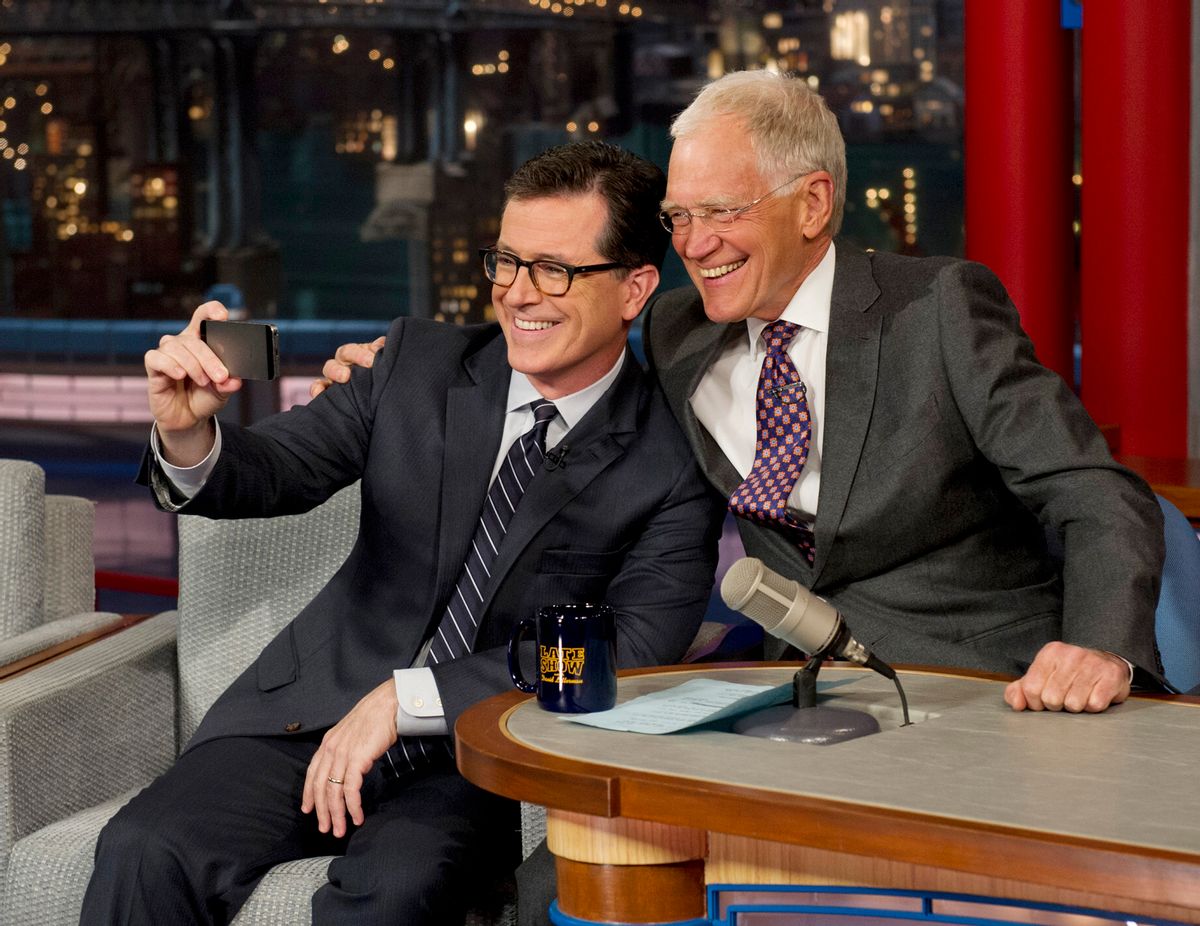 In this photo provided by CBS, Comedy Centrals Stephen Colbert, left, takes a selfie with host David Letterman on the set of the Late Show with David Letterman, Tuesday, April 22, 2014 in New York. This was Colberts first visit to the show since CBS announced that he will succeed Letterman as host when he retires in 2015. (AP Photo/Jeffrey R. Staab) MANDATORY CREDIT, NO SALES, NO ARCHIVE, FOR NORTH AMERICAN USE ONLY (AP)
--

Stephen Colbert's appearance on "The Late Show With David Letterman" -- the show he'll take over when Letterman retires next year -- has lit up the Internet all day, with Colbert's reading of a "Top Ten" list and discussion of his history with the elder host. (Apparently Colbert turned down a Letterman internship in the '80s.) It all positioned Colbert as a potential late-night leader, come 2015.

But competing late-night hosts Jimmy Kimmel and Jimmy Fallon will have nothing to worry about as long as Colbert does one thing: keep his hideous new glasses, a pair of blocky black-framed spectacles. These glasses will, if left above Colbert's nose, just maybe kill "The Late Show."

On "The Colbert Report," his current Comedy Central series, Colbert appears in character as a conservative pundit, wearing an unobtrusive pair of wire-rimmed specs. Wanting to move beyond his character is a very understandable impulse, but couldn't Colbert have trusted his audience to follow him without an obvious visual cue? There's a reason Fox News hosts -- and as famous a TV host as, yes, David Letterman -- don't wear bulky glasses. It's because they pull focus.

How was anyone watching the Colbert-Letterman interview able to focus on the jokes? When Stephen Colbert had his head up, he looked like the "cool" college professor; when he angled it even a bit, as when taking a "selfie" with Letterman, the top rim of his dark-framed glasses (which did not seem to fit well) blocked his pupils. The effect was reminiscent of Robocop.

If an entertainer wants to have a particular spectacle "look," they have to commit to it early in the career -- that's just the way it is. A new adornment on a familiar face is jarring in the first place. No one watching Colbert do an out-of-character interview needs a visual cue to remember he's not really a conservative pundit; instead, that visual cue makes him look like an entirely different person, or just an Uncanny Valley Colbert.

Wasn't the whole appeal of Colbert's real-life persona, away from "The Colbert Report," that it was warm and unaffected? These glasses are a bit too on-trend for Colbert, as well as too large by far for a person with fairly delicate features. He looks as though he's chasing the 20-something audience by performing an outdated idea of what is "hip" across his face.

Colbert's pursuit of a new look must be stopped. Otherwise, by the time he launches his show, he may end up in a monocle.