Why do so many lunatics defend this racist? The crazy tales they're hearing. We explain why their claims are wrong 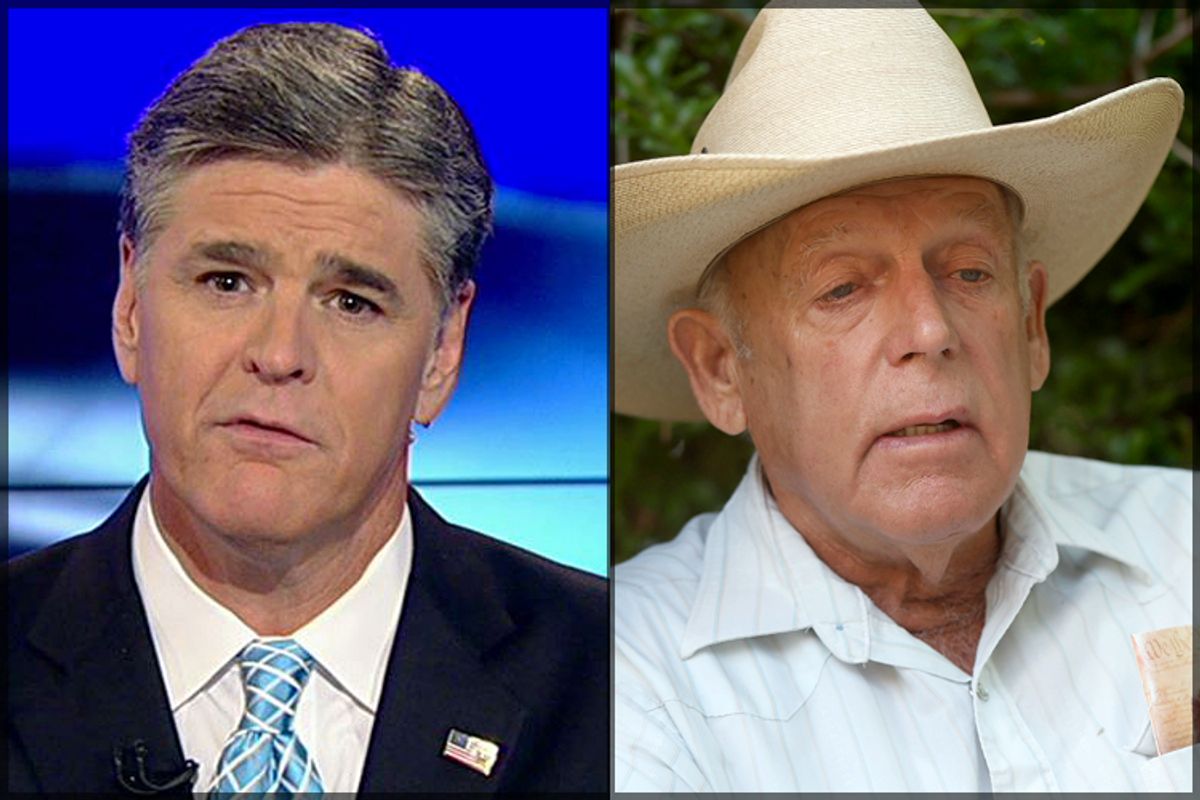 The Cliven Bundy standoff, involving an angry rancher who refuses to pay federal grazing fees, took a new, ugly turn Wednesday night when the New York Times reported horrifying comments he made about "the Negro" and slavery. Meanwhile, Bundy's quest continues to grip Fox News audiences. This is largely because his story is more reasonable if you watch Fox's creative, often fictionalized version of it.

Here, then, are nearly two dozen claims that have been uttered in defense of Bundy by Fox personalities, other right-wing pundits and Bundy himself.  (A good deal of them, alas, come from Sean Hannity.)

For each claim, we’ve offered a bit of a fact-check or truthful context afterward.

1. “The BLM’s actions lacked proportionality.”  (Sean Hannity)  The Bureau of Land Management simply arrived to take cattle, per a court order. They didn’t show up with guns drawn and they never even entered Bundy’s property. They did, however, carry arms for a good reason: They had received intelligence that Bundy and his crew might cause trouble. There is nothing “disproportionate” about being prepared.

2. “The BLM pointed guns at children.” The Republican Nevada Assemblywoman Michelle Fiore has been saying this during her 15 minutes of fame, including on “All In With Chris Hayes” on MSNBC last week. There has been no evidence offered that the BLM “pointed guns at children.” Bundy’s teenage son attempted to assault officers and kicked a police dog and resisted arrest, and so they used a taser on him, as well they should have.

3.  “The Feds are going to ‘cause another Waco’.”  (Cliven Bundy, et al.)  The feds are trying to avoid another Waco. The U.S. government did not “cause Waco” but rather botched the response; they could have waited it out more patiently to avoid the loss of life of innocent children. And this is exactly why the feds have not pressed the issue (yet) with Bundy, and why the BLM stood down.

4. “Since when does the government send armed officers to collect a debt?” (Hannity) Many repossession and foreclosure actions often involve a sheriff or other armed officials, and confiscation of property is an ordinary means by which a government resolves a debt.  For example, if you accumulate 20 years of unpaid parking tickets, a court will order that your car be booted and towed until you pay. And if you point a rifle at the cop or otherwise assault him, you might get shot (or tased).

5. “Nobody has seen any bill for $1.1 million. It doesn’t exist.” (Michelle Fiore, R-Nevada Assembly, on MSNBC)  Bundy says he has “never been sent a bill” but also says he never opens mail from the U.S. government because he does not recognize the U.S. government’s existence.  A court has ordered him to pay a debt of $1.1 million in accumulated fines and fees for having put greater than his allowed quota of cattle on federally protected tortoise habitat.

6. “The BLM provoked, escalated this controversy.”  Rep. Steve Stockman, R-Texas, made this accusation, as have numerous others. If an armed resistance is put up against an asset seizure by law enforcement officials who are acting under a court order, the provocation is exclusively the work of those who have chosen to threaten the lawmen with violence.

7. “The land is not being used -- it’s not like they want to build a school, road or hospital on it.”  (Hannity) How federal land is used is determined by federal law. A citizen does not get to decide for himself whether the land should remain vacant or grazed, or whether something should be built on it.

8.  “Harry Reid and his son have a financial motive to remove Bundy’s cows.”  (Bob Massi, Fox News legal correspondent)  There is no evidence at all that Harry Reid or his son have any financial or political interest in what is going on. Don’t believe everything you hear on Fox News, especially when the reporter qualifies it, as Massi did here, by saying, “We don’t really know if it’s true.”

9.  “The BLM killed cattle and put the corpses in a mass grave.”  There is no evidence that the BLM euthanized Bundy’s cattle except some photos and footage of dubious pedigree being aired nightly on Fox News.  That said, it is possible that a cow or two could have died during the roundup.  Cattle are occasionally killed in large roundups.  Now, if there was a mass euthanizing of  cattle, the BLM should be forced to explain that.

10. “The sheriff is the only man with arresting power in Clark county.”  Bundy has made this claim in his nightly appearance on the Sean Hannity show, and it has long been a favorite talking point of Tea Partyers, especially in the West.  But it is false. Federal officers have arresting power where federal land is trespassed or where federal law has otherwise been broken. The BLM does have an obligation under federal regulations to seek the cooperation of local law enforcement to resolve certain disputes. But in this case, the sheriff refused to help out.

11. “People should not die over a few cows eating free government grass.” (Hannity)  That’s true, which is why Bundy and his militia members should not have chosen to point guns at federal officials and escalate the situation. Now, those militia members could find themselves getting shot or even killed. Such is the consequence of pointing rifles at lawmen trying to do their job.

12.  “How could a cow possibly eat $1.1 million of grass?” (Bundy’s daughter, Stetsy Bundy)  Cows can easily eat a million bucks worth of grass but that’s neither here nor there. Grazing fees are not assessed by weighing the amount of tonnage that a cow eats. It is a per-animal-unit, per-month fee, and it adds up over 20 years. Furthermore, Bundy’s liability is as much  for fines for illegal trespass as it is for fees.

13.  “What’s wrong with Bundy’s cows simply cutting the grass for free?” (Hannity) A trespass is not forgiven simply because the trespasser believes he is performing a service for the owner. Furthermore, “cutting grass” is not depriving the owner of a nuisance but rather taking a valuable resource (edible grass) from the owner.

14.  “Bundy has rights to the land because his ancestors worked the land prior to formation of BLM.”  Bundy has made this argument himself and others have echoed it, but even if Bundy’s ancestors did work the land (and we only have his word that they did, and he is notoriously dishonest), as of the passage of the Taylor Act in 1934 they would have had to pay grazing fees. And it was never private land.  The parcel that Bundy is trespassing has been owned by the U.S. government ever since it was purchased and/or won from Mexico or Spain.

15.  “This is all predicated on a tortoise that is not even endangered.”  (Hannity) The decision as to whether the tortoise is endangered and whether it can withstand grazing, and how much, is one for biologists to make and can be challenged in court by anyone that disagrees with it, in which case the government must show that it is using valid science.

16.  “Grazing more cattle on federal land will keep beef prices down.” Sean Hannity made this idiotic remark two nights ago. If the government wants to centrally control the market for beef (as it sometimes does with other commodities) it is a policy decision to be made by Congress and the Department of Agriculture, not Mr. Bundy or Sean Hannity.

17.  “We have rapists, pedophiles and murderers. Why is government focusing on this piece of land?” (Hannity)  The government’s decision to seize the assets of a scofflaw will not cause rapes, murders or acts of pedophilia to be neglected. Law enforcement is capable of multitasking.

18.  “The feds should simply put a lien on Bundy’s property.” (Fiore, Hannity et al)  Yes, they can and they should (and likely have already, since it’s been going on 20 years), and this would mean that when his cows arrive at market, the proceeds would go directly to the government. But realized that the collection of the past due amount is only one issue -- the other is that Bundy continues to run his cows on land that is closed to grazing, and a lien won’t accomplish that.

19.  “If you owed money, would you like it if the government came to your house and pointed guns at you and your wife and family?” (Fiore)  The BLM did not “point guns” at the Bundys until the Bundys assaulted them. The BLM was doing its job, and Bundy’s armed supporters threatened them with force and the son assaulted one of the officers and his dog.

20. “Peaceful protesters were relocated miles away from entrance to the Bundy ranch, and denied their First Amendment Rights.”  (Brian Sandoval, GOP  governor of Nevada) When law enforcement needs to operate in a tense situation, they are within their rights to move protesters to an area safely away from the action. This is for their own protection, and it is especially  appropriate where some of the protesters bring weapons.

22.  “If the cattle were illegal immigrants, the Justice Department would be running guns to them and Homeland Security would be giving them free phones.” (Dana Loesch) Even if this were true (and it isn’t), cattle are not illegal immigrants. Nor does this silly hypothetical scenario bear in any way on the fact that Bundy and his thugs have broken the law by ignoring several court orders, and interfering with law enforcement in many ways.