Autonomous underwater vehicle only has 10 percent left to search, and Malaysia sent preliminary report on crash 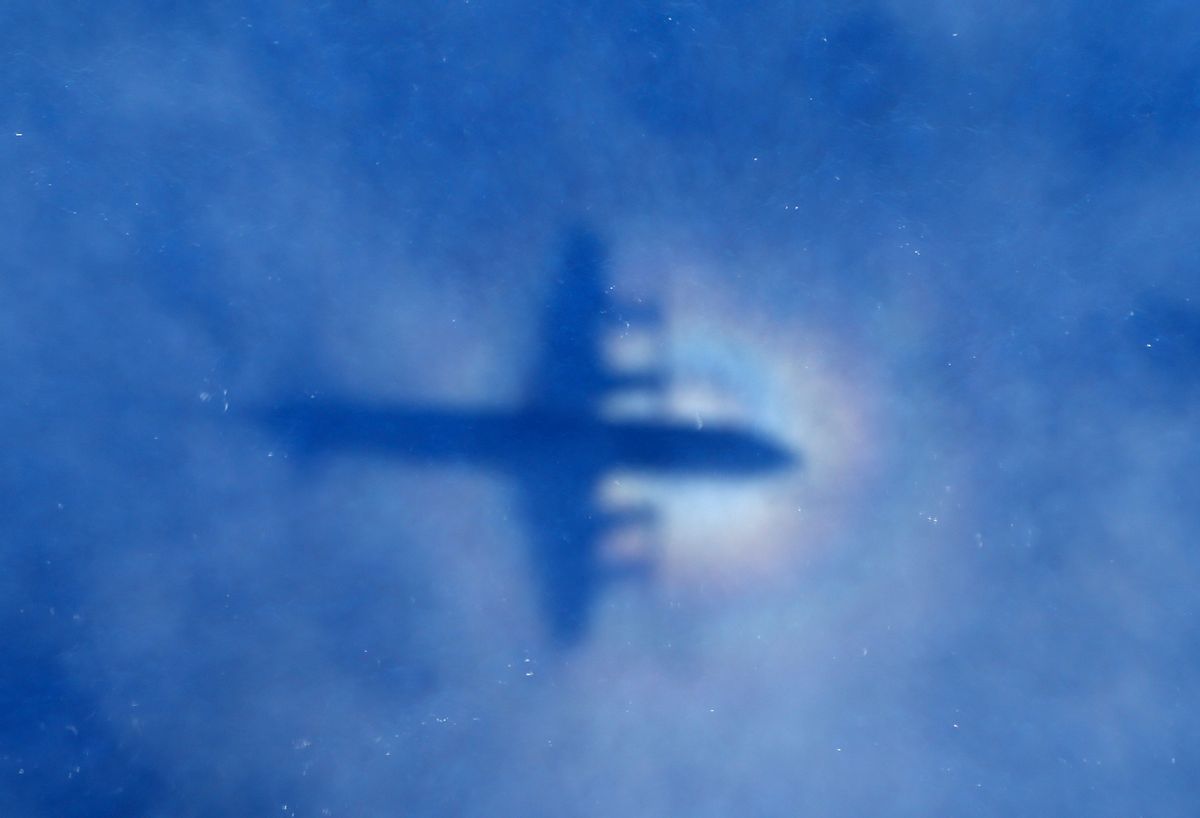 In this March 31, 2014 photo, a shadow of a Royal New Zealand Air Force P-3 Orion aircraft is seen on low cloud cover while it searches for missing Malaysia Airlines Flight MH370 in the southern Indian Ocean. ((AP Photo/Rob Griffith))
--

Australian officials announced that debris, found on a western Australia beach, is not related to missing Malaysia Airlines flight MH370. The debris was located 6 miles from the town Augusta, 198.8 miles from Perth -- home-base for the search -- and around 1,000 miles away from the center of the actual search zone. Images of the debris were analyzed by the Australian Transport Safety Bureau, and according to the Joint Agency Coordination Center the bureau "is satisfied it is not a lead in relation to the search for missing flight MH370."

The autonomous underwater vehicle, Bluefin-21, has completed 90 percent of its underwater deep-sea search. It is currently on its twelfth mission, and thus far nothing of note has been found. For nearly two weeks Bluefin-21 has been combing  a circular search area with a diameter of 12 miles, centered around where two potential black box "pings" were heard on April 8. Four pings consistent with black box signals were detected by the Australian ship Ocean Shield, towing a black box detector, before the black box's batteries died.

Currently Bluefin-21 is using side-scan sonar to scan the ocean floor and create high resolution 3D images of the area which are then downloaded after the sub's 16 hour search. Despite this sophisticated U.S. Navy technology, the Bluefin-21 does have its drawbacks. The major one is that it cannot dive deeper than 2.8 miles, and officials say that the depths of the area surrounding the search zone gets up to 4 miles deep.

Australian Defense Minister David Johnston said that Bluefin-21 could take two more weeks to complete its mission. Officials, however, are already planning the next phase. According to CBS News, Australian, Malaysia, the United States and China are all working consulting on the next course of action. Plans will be announced on Monday.

Johnston has suggested that the plans will involve heavy-duty side-scan sonar detectors. According to CBC News the detectors will be "similar to the remote-controlled subs that found RMS Titanic 3,800 metres (sic) under the Atlantic Ocean in 1985 and the Australian Second World War wreck HMAS Sydney in the Indian Ocean off the Australian coast, north of the current search area, in 2008."

The visual search continues with 11 military aircraft and 11 ships. Aereial search had been suspended due to ex-Tropical Cyclone Jack. Conditions include "heavy rain and low cloud, with south easterly winds up to 35 knots, sea swells of three to four metres and visibility of one kilometre," according to the Joint Agency Coordination Center.

Malaysia has sent in its first preliminary report on the missing plane, but has not yet released it to the public, churning up more speculation that dominated news coverage in the month of March.

MH370 has been missing since March 8. The Boeing 777 carrying 239 passengers took off from Kuala Lumpur and was headed towards Beijing. Much remains unexplained, in terms of why the flight's transponders shut off and why the flight veered off its flight path and ended in the Indian Ocean.