Regardless of the finale, "Parks and Recreation" already has a happy ending

Tonight's season finale isn't the series finale, but it might as well be 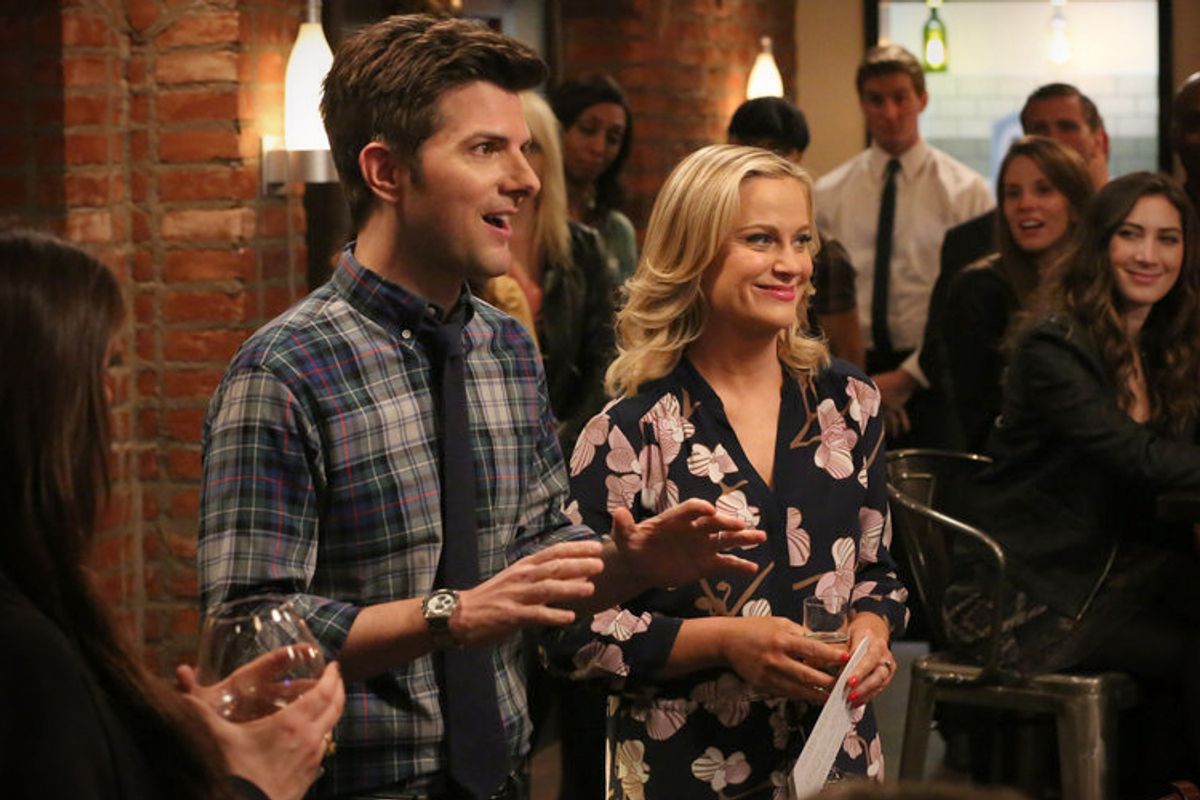 I love romantic comedies. And over the last five years “Parks & Recreation” has evolved from a mildly amusing “Office” knockoff into a very satisfying – if protracted – workplace rom-com. Anyone who knows the genre knows that, pretty much without exception, romantic comedies end with a happy couple. “Parks and Rec” has certainly achieved that, bringing together disparately fussy co-workers Leslie Knope (Amy Poehler) and Ben Wyatt (Adam Scott) through enough quirky courtship and confounding “will they/won’t they,” “can they/can’t they” trials to soften even the staunchest “When Harry Met Sally” purist. More than simply finding love, Leslie – unquestionably the show’s protagonist – has strategized and scrapbooked her way to a successful career, fulfilling friendships, and, as of last week, a family. If we accept that the modern-day, workplace rom-com is one in which, yes, our heroine can have it all, then Leslie Knope’s journey is complete, and tonight’s season finale should probably be the show’s last. I write this knowing full well that “Parks and Rec” has already been renewed for a seventh season. But, hey, that’s just how network television works: If there is money to be made, the show must go on.

In an interview with “Entertainment Weekly,” “Parks” executive producer Michael Schur told the outlet that tomorrow's finale was conceived before the show had been picked up. Following the renewal, the creators rejiggered the episode and planted the seeds for a seventh season. But the show had been winding down to a reasonable conclusion since, at least, midseason. I’d argue that, other than to supply the more sentimental  viewers with traditional series-end goodbye moments, the one-hour finale episode isn’t even necessary.

No romantic comedy is complete without sidekicks – sounding boards for the pining of the romantic leads. But by the time actors Rashida Jones and Rob Lowe were ready to move on to other jobs, Leslie and Ben had become such a blissfully stable and self-sufficient couple that their best buds, Anne and Chris, could be written off the show without much of a snag in their security net. The rest of this once-mighty ensemble’s individual character arcs were clearly being tied up as well.

Despite her petulant façade, April Ludgate had become a functional, if not enthusiastic, member of local government. Her husband, Andy, always and forever a dolt, is safe under her and Ron Swanson’s protection. Ron and Ben’s alternating tutelage has also helped Tom Haverford transform from a hapless wannabe to an actual businessman with legitimate prospects for success. Ron, himself, has grown from an intractable curmudgeon into a doting family man who doles out advice and assistance as easily as Duke Silver does eargasms. It is so obviously a show’s over moment when, during the penultimate episode, “One in 8,000,” Donna Meagle (Retta) calls Ron out on his maturation after he counsels his notorious profligate co-worker to avoid so much “drama.” She literally sums up his entire trajectory.

None of this is meant as a denouncement of "Parks and Rec." Though uneven at times -- especially in the beginning -- the show has been consistently funny for more years than most contemporary sitcoms. But it seems to have reached its natural conclusion. And, by writing a sixth season with such warm finality, the show's creators have conceded this. Could we spend another season watching Leslie agonize over her new job, or April resist the call of service, or Tom open his restaurant, or Donna settle down, or Ron build more furniture? Probably. But it will most likely not feel fresh. We have seen these events and their concurrent pitfalls happen before to different characters at different times. The only real difference is that, now, we have been assured that all will be OK. Even the discovery that Leslie is pregnant with triplets does not herald much of a tremendous hiccup.

It is not in “Parks and Rec’s” DNA to dip to the melancholy level that “The Office” did once Jim and Pam began to experience marital and parenting troubles. Leslie is pregnant now, but Leslie and Ben will almost certainly be wonderful parents – whether that will be narratively compelling or not remains to be seen. Leslie assures Ben of this in “One in 8,000” after ticking off a list of their many shared travails over the years. “All of it has just been preparation for this,” she says, looking up into his eyes and holding his hands in hers, “I am immune to stress because I have you.” Had they followed up with a deep, passionate kiss, the credits could have rolled right there.

(The season finale of "Parks and Recreation" airs tonight on NBC.)