Republican monsters duke it out: The coming "Plutocrats vs. Tea Party" cage match

Suddenly, suburban GOP donors are coming to a realization: Their party's base is the heartland. Where've they been? 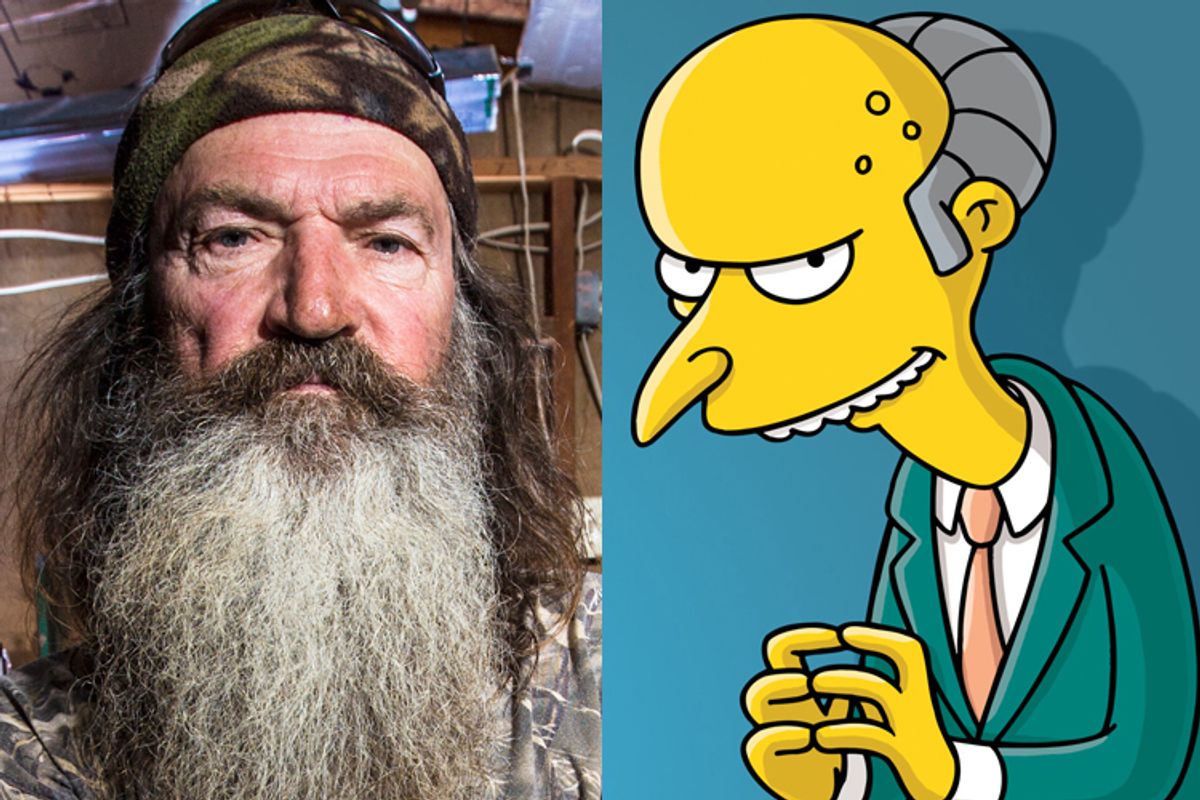 Stop the presses! Breaking news! The Republican Party is no longer the party of Nelson Rockefeller. This is a shocker, I know --  if you've been asleep for the past 25 or 30 years. But according to the National Journal this comes as a surprise to many of the rich Republicans who are entering the electoral fray.

It took David Perdue about 20 seconds of speechifying to expose a tension roiling the Republican Party. Speaking in January, the former business executive turned Georgia candidate for U.S. Senate asked a group of local Republicans to parse the resumes of his primary foes.

"There's a high school graduate in this race, OK?" said Perdue, referring to his opponent, former Georgia Secretary of State Karen Handel. "I'm sorry, these issues are so much broader, so complex. There's only one candidate in this race who's ever lived outside the United States. How can you bring value to a debate about the economy unless you have any understanding about the free-enterprise system and what it takes to compete in the global economy?"

The two-pronged swipe elicited cries of condescension and elitism that eventually forced Perdue to apologize. And it revealed a vital reality about the state of the Republican Party as its members prepare to select a standard-bearer for the 2016 presidential primary: The GOP has long ago shed its stereotype of being the party catering to the wealthy.

Huh. So the past few decades of ostentatious pork rind munching and horseshoe throwing and brush clearing and deer shooting weren't expressions of this "vital reality"? This is new to them? If this is so, they're very slow learners.

That is the thesis of this article anyway, which goes to great lengths to explain that the party of the suburbs has morphed into the party of the exurbs. But the fact is that the Republicans have been massaging this white, working-class, rural and exurb voting bloc for decades. In fact, it used to have a specific name: Reagan Democrats. They were described that way by Stanley Greenberg, the pollster who coined the name for working-class whites who came to see the Democrats as being obsessed with the poor, the unemployed, feminists and people of color at their expense. This is the cohort that both parties considered the Holy Grail for many years. In fact, it took Barack Obama putting together a winning coalition without them that finally got the Democrats to stop chasing them like a bunch of One Direction fan girls (Rascal Flats groupies, more like it) and accept that they had happily become Reagan Republicans long ago. That this is news to anyone, much less GOP candidates, at this late date is rather surprising, to say the least.

The article itself seems a bit anachronistic as if it might have been lifted from one of those anthropological mainstream news pieces of the '80s where intrepid reporters ventured out into Real America and discovered that the country mice didn't like the city mice. But that's not to say it isn't describing a real problem within the Republican Party: They apparently have a bunch of clueless rich people actually running the show:

"There's a complete lack of understanding of what primary voters are all about," said one GOP strategist involved in a potential presidential candidate's campaign, who requested anonymity to speak candidly. "You go around and hang out with big Republican donors, and if you were to take all their advice on how to win, you'd be screwed beyond belief, particularly in a primary."

That is interesting. If there's one thing I thought all Republicans understood, even the rich ones, was that the vaunted "base" was king. After all, it was their expensive propaganda that created it. Those who financed the conservative movement very carefully nurtured the so-called Silent Majority of white people who didn't hold with all that pointy-headed multiculturalism or welfare queens and feminazis --- the hardscrabble Real Americans of the heartland who loved flag and country. If the big GOP donors have been watching "Mad Men" reruns and think they're financing a movement of Wall Street traders and Junior League housewives, they're on the wrong channel. They need to turn on "Duck Dynasty" and get themselves some guns.

One of the major gripes among liberal activists over the years has been the fact that rich Democratic donors meddle too much, particularly in comparison with the Republican billionaires who have typically just signed the checks and left it to the conservative movement political pros to spend the money wisely. But that may be changing. No, it's not that the Democratic donors are signing big checks and leaving it to the grubby operatives; the GOP big donors are now meddling too. According to the New York Times, they're no longer willing to defer to party elders and want to be involved in strategy. They're even starting their own political shops to do it "in house." Welcome to our world, Republicans.

For the past couple of years there has been much rending of garments in the Republican political establishment over the Tea Party dominating the GOP and running it into the ground. But they created the Tea Party out of that original white, working-class bloc by feeding their prejudices and stoking their insecurities. Now their monster is out of control and they don't know how to lure it back into its cage. But the Tea Party isn't their only fantasy creature. Perhaps their greatest achievement is the mythic Genius Plutocrat, the Ayn Rand Galtian hero whose courage, intellect and overall superiority in all ways is demonstrated by the singular fact that he has so much money. It looks like that beast has escaped his leash as well and the two grotesque phantasms are destined for a political cage match of epic proportions in 2016.