Sean Hannity has been the racist rancher’s top backer, and Fox and the GOP made him a cause. Now he's their problem 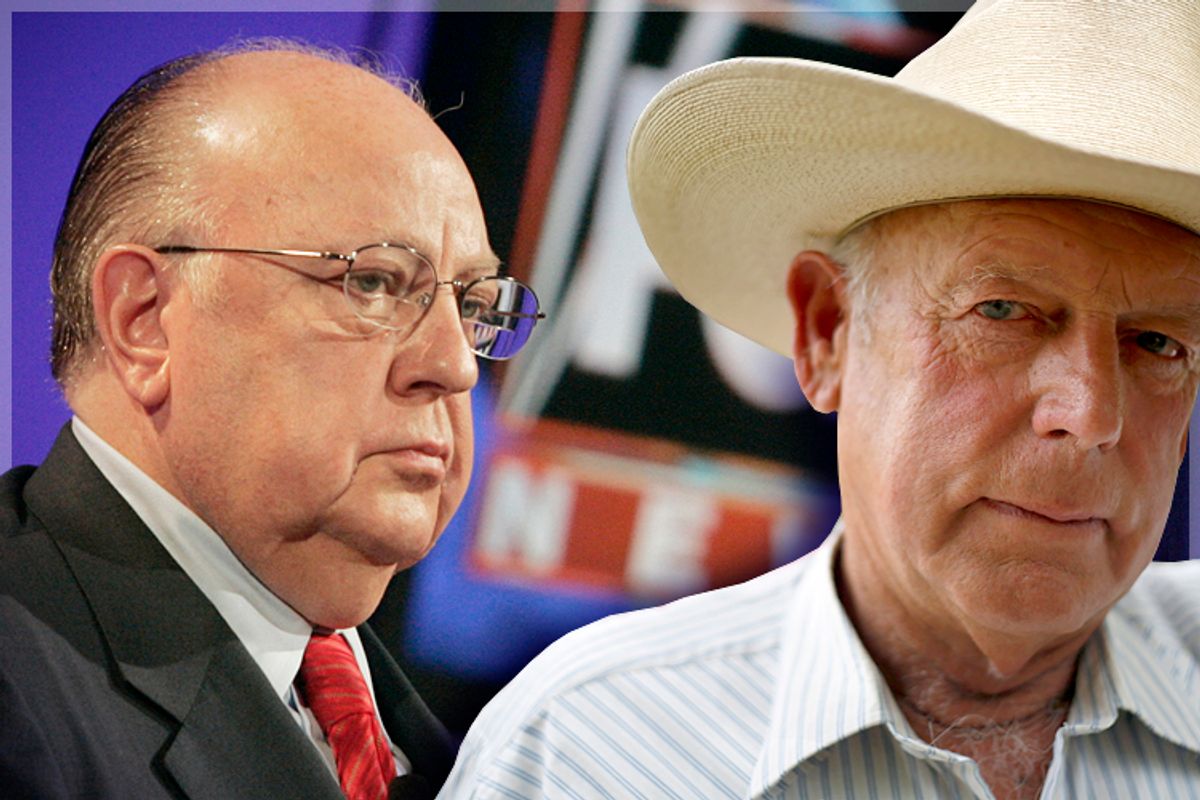 Cliven Bundy, the infamous welfare rancher, was holding forth at his Nevada homestead Wednesday, and apparently he had a lot to say about “the Negro.” Who could have guessed?

“And because they were basically on government subsidy, so now what do they do?” he continued. “They abort their young children, they put their young men in jail, because they never learned how to pick cotton. And I’ve often wondered, are they better off as slaves, picking cotton and having a family life and doing things, or are they better off under government subsidy? They didn’t get no more freedom. They got less freedom.”

Where to begin? “They never learned how to pick cotton?” Or “are they better off as slaves?” Or ... take your pick.

Surprise! Sean Hannity’s hero, whose cause has been embraced by Sens. Dean Heller of Nevada and Rand Paul of Kentucky along with Texas Gov. Rick Perry, turns out to be an old-time Republican racist, the kind that even Jonathan Chait recognizes, and Fox News and the GOP have a problem.

Until now I’ve ignored Bundy because he’s an extremist and a freak, and even Glenn Beck has denounced him. I was reluctant to use him against the GOP. But as he’s gotten support from the likes of Paul and Perry, two respected 2016 candidates, plus regular backing from Hannity and Nevada Sen. Heller, he’s become a huge problem for the right.

The welfare rancher has grazed his cattle for free and owes the government more than a million dollars, but to his admirers he’s leading an American insurrection. “This is the beginning of taking America back,” Shawna Cox of Kanab, Utah, told the New York Times. From whom? Shawna doesn’t have to say.

Asked about Bundy’s virulently racist remarks by the Times, Rand Paul was “not available for immediate comment.” What courage. At least Dean Heller’s office immediately condemned the “appalling and racist statements.” Here’s a tip for Rand Paul: You’re a libertarian. Give your staff the liberty to tell the media you abhor racist comments, even if you’re not around. (Update: Paul released a statement condemning Bundy's remarks Thursday morning.)

It was only yesterday – literally – that National Journal was telling us that Paul was now the leading Republican tackling issues of poverty and race, after Paul Ryan stumbled, having pretended to care about the poor while his budget slashed programs that help them to give tax cuts to the rich. Unfortunately, as “Rand Paul’s Compassionate Conservatism” was being published, Paul was talking to Fox’s Megyn Kelly and blaming Chicago’s recent spate of violence on “thuggishness” and the inability of Chicago’s thugs to distinguish between “right and wrong.”

Let’s face it: Paul’s been a better ally to Cliven Bundy than to the inner-city poor. I’m not saying he would endorse Bundy’s remarks about “Negroes”; he knows better than that. At least I think he does. But culturally and politically, he’s quicker to empathize with the lawbreaker in Nevada than those thugs in Chicago.

Then there's Sean Hannity. As Jon Stewart said, his Bundy-boosting has made Glenn Beck "the voice of reason." But Hannity has repeatedly rejected the criticism, claiming Stewart "is kind of obsessed with me," while Bundy has called Hannity his "hero."

Here’s hoping that Rand Paul denounces Bundy’s remarks early Thursday. It won’t change the sad fact that way too many people who think like Paul politically think like Bundy racially.

I don't expect Hannity to say a word about Bundy's predictable descent into the muck of racism, but I'd love to be surprised.