Do you want to save the world? Forget about the desert tortoise 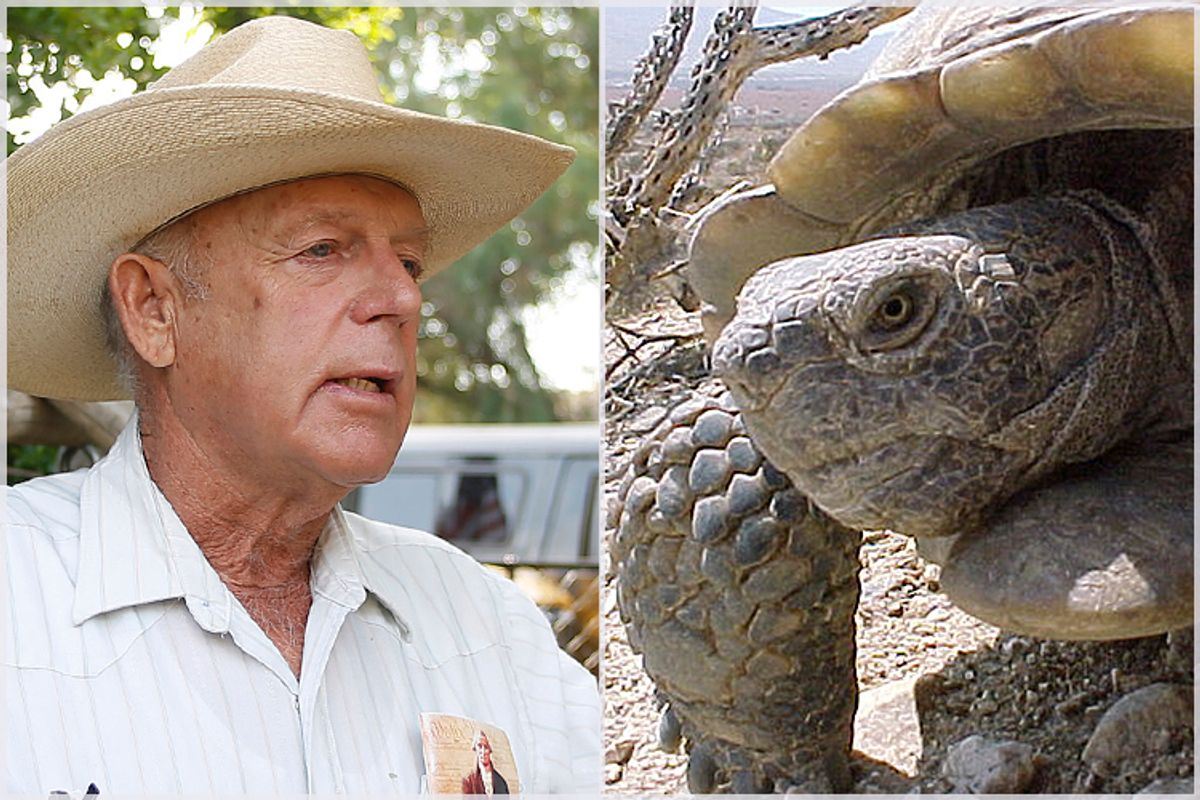 I've been thinking about endangered tortoises a lot lately; they've been dragged into our culture war's newest stand-in, cheerily racist Nevada rancher Cliven Bundy. If you get your news on the left, the story of Bundy's illegal, modern-day farmsteading has been framed around his unauthorized use of government land. You probably already know that he owes a million dollars in what is essentially unpaid rent to the Bureau of Land Management, and I'm inclined to suspect that liberals are correct in assessing that, when all is said and done, the motivating factor here is just a whole bunch o' money. But I also think it's interesting that, in right-wing media, the framework of the story is so entirely different. And on the right, endangered tortoises are a large part of this frame.

I first saw the Bundy story two weeks ago, when it was linked on Fark (showing my age, I know). The story came from a website called -- not kidding -- "offgridsurvival.com," and this little tidbit immediately caught my eye: "According to the feds, this is all about protecting the desert tortoise. Yep, apparently protecting a turtle is now reason enough to storm a man’s property and illegally steal his cattle."

Despite being fairly inaccurate, this viewpoint should help explain to liberals exactly why this story went so viral on the right. To conservatives, this reaction (overreaction?) -- armed federal agents protecting the noble desert tortoise -- represents everything wrong with the political left. Here's your federal "bully," eagerly restricting a Real American's freedom, his desire to use the land that God has bestowed, and his ability to make an honest(ish) living. And while I disagree with this interpretation wholeheartedly, there's a part of it that I still find sympathetic. Mostly, I think, it's because I agree with the general premise, if not the misguided ideology.

James Lovelock, one of the first climate scientists to sound the alarm of the planet's changing climate in the late '60s, has arrived at many similar (if less crass) conclusions about the various policy goals that the environmental movement has achieved. Last February, the Guardian interviewed the 88-year-old scientist (still as sharp as a tack), asking him to speculate on our civilization's chances of long-term survival. His words should strike any optimist like a cold glass of water to the face:

On the day we meet, the Daily Mail has launched a campaign to rid Britain of plastic shopping bags. The initiative sits comfortably within the current canon of eco ideas, next to ethical consumption, carbon offsetting, recycling and so on - all of which are premised on the calculation that individual lifestyle adjustments can still save the planet. This is, Lovelock says, a deluded fantasy. Most of the things we have been told to do might make us feel better, but they won't make any difference. Global warming has passed the tipping point, and catastrophe is unstoppable. [...] "It's just too late for it," he says. "Perhaps if we'd gone along routes like that in 1967, it might have helped. But we don't have time. All these standard green things, like sustainable development, I think these are just words that mean nothing."

He dismisses eco ideas briskly, one by one. "Carbon offsetting? I wouldn't dream of it. It's just a joke. To pay money to plant trees, to think you're offsetting the carbon? You're probably making matters worse." [...] Do he and his wife try to limit the number of flights they take? "No we don't. Because we can't." And recycling, he adds, is "almost certainly a waste of time and energy", while having a "green lifestyle" amounts to little more than "ostentatious grand gestures". He distrusts the notion of ethical consumption. "Because always, in the end, it turns out to be a scam ... or if it wasn't one in the beginning, it becomes one."

Some extremely rosy assumptions about humanity's long-term chances are baked into the late-20th century environmental movement: just consider the obsession with plastic and styrofoam's inability to biodegrade. Worrying about the amount of plastic on the planet thousands of year from now --what a luxury! Environmentalists back then held a degree of optimism that seems almost painfully naive in the world today -- and the motive for saving one or another species from extinction is deeply tied up in this implicit optimism. Unfortunately, these assumptions don't make sense in the present. At their worst, they diminish the credibility of the environmental movement in general, wasting activists' time, energy and finances, focusing these limited resources on short-term, feel-good goals (like saving one species) in place of longer-term objectives (like preventing the kind of warming that will lead to mass species extinction regardless of whether other initiatives are enacted).

Of course, this view has its limits: We can't abandon every environmental initiative that doesn't attempt to fix the the whole climate in one go. Any effort to weather -- and eventually, hopefully, overcome -- climate change will require a whole constellation of smaller, well-leveraged initiatives. And as Saul Alinsky taught, successful political movements rely on building confidence -- first through small victories, and later by building toward more ambitious projects. Earlier this year, Matt Yglesias outlined how this viewpoint -- focused on engendering short-term political coalitions rather than long-term policy results -- made the Keystone XL project an enormous success for environmentalists: Bill McKibben's 350.org doubled its email list since it started focusing on the pipeline. As Yglesias notes,

A big virtue of Keystone as an organizing focal point is that it's relatively clear cut. The thing either gets built or it doesn't. There's a clear ask, it's easy to understand, and you're either winning or you're losing. The EPA issue is very different—a complex strategic bargaining environment with a whole bunch of stakeholders in play, and a lot of different highly technical ins-and-outs.

Obviously political movements always face a danger with these kind of organizing issues. Spend too much time on them, and you can end up in a situation where you're missing the forest for the trees—building your mailing lists and small donor base without moving the ball on what matters most. But at the same time, you can't move the ball unless you have demonstrated organizing capacity. And to do that, you sometimes need to focus on slightly eccentric issues that happen to have good organizing attributes.

Balancing these impulses will help both the environment and the credibility of those who've devoted themselves to saving it, but it's extremely important that we remain realistic about the magnitude of the crisis that we face. The future of our climate is grim; not every tortoise will survive.