Sean Hannity's done. Roger Ailes booted Glenn Beck when he became a liability. A Colbert clip might make it so 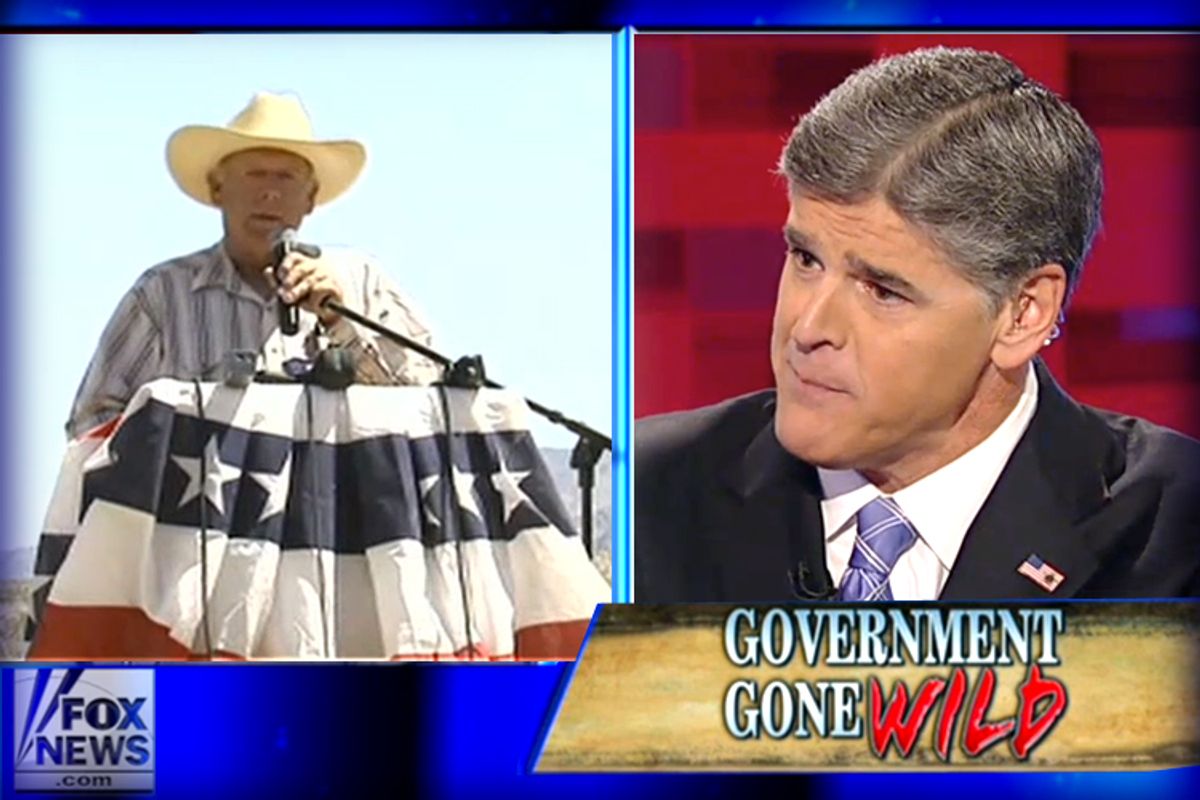 I'll admit, this brilliant Stephen Colbert piece made me wonder: Could Sean Hannity’s detestable role in making Cliven Bundy a right-wing folk hero, and his lingering embrace of Bundy despite signs that his Nevada standoff would never end well, doom him at Fox? You'll enjoy Colbert's "Ballad of Cliven Bundy," which falls apart because "unfortunately, nothing rhymes with Negro."

Hannity is already in some trouble: Roger Ailes gave Megyn Kelly his ultra-prime 9 p.m. prime-time slot and bumped him to 10 p.m. last year. And remember, Ailes dumped Glenn Beck when he became a laughingstock and a liability for the network, and for conservatism. Hannity has done the same.

Now, it’s not about Hannity’s politics, and it wasn’t about Beck’s either. I agree with Ailes biographer Gabriel Sherman, who argues that “Ailes is more extreme than Glenn Beck.” Sherman explained: “One thing that makes Roger Ailes a genius is he obscures his true agenda. Glenn Beck is transparent.” Beck’s sin wasn’t his increasingly extreme conservatism; it was damaging extreme conservatism by making one of its leading faces an unstable lunatic.

Hannity likewise damaged right-wing politics by making Cliven Bundy a hero. Now he and the entire network have to backtrack, but the travesty once again exposed the way racism so often goes along with right-wing ideology today. (Often, not always.)

Yes, it was Colbert who made me think about the possibility that we’re watching Hannity self-destruct. I don’t watch Hannity, so I’d missed the clip Colbert showed, where the Fox host told the welfare cowboy, “You and your family seem like really nice people.” This makes a lie out of Hannity’s insistence Thursday night that he merely endorsed the rancher’s struggles against government overreach, not the rancher himself.

But even before Bundy’s ongoing self-exposure as a racist, he should have been too toxic even for Hannity and Fox. How does a guy who declared early on “I don’t recognize the United States government as even existing” become a folk hero in the first place? The extremism of that statement should have been warning enough that Bundy was not only crazy but dangerous (and probably racist to boot, since not believing in the federal government tends to go along with not believing in the Emancipation Proclamation or the 13th Amendment, as Colbert noted.)

Now Hannity is trying desperately to distance himself from Bundy. “The ranch standoff that took place out in Nevada was not about a man named Cliven Bundy,” Hannity declared, in a segment, unbelievingly, titled “Government Gone WILD. “At the heart of this issue was my belief that our government is simply out of control.” Of course it was Ronald Reagan who imposed the grazing fees Bundy refused to pay. Cliven Bundy only became a hero to many on the right because he was standing up to Obama.

To many, I should add, not all, or even most. The Weekly Standard is getting a lot of praise for this piece warning against lionizing Bundy, even before he began his racist rants. It’s great; it’s also common sense.

Let’s remember it was Hannity who also made George Zimmerman a right-wing folk hero, when Trayvon Martin’s killer chose Hannity to tell his story to, even after his own lawyers advised against it. Now, as Colbert noted, Hannity’s embrace of Bundy makes the two righties “as close as Ku and Klux.” Ailes can’t afford to make Fox the “Klan” in that punch line. Hannity has endangered not only Fox but the right-wing project to which Ailes has devoted not just his network but his life.

The wily Roger Ailes of old would see that – he likes his racial resentment a little bit more subtle; stirred, not shaken, you might say — and Hannity would be in trouble. But it’s possible the Roger Ailes of today is poisoned by his own Obama-hatred and too many years of working with toxic racial bile, and Hannity will keep his job.