In honor of the first lady's role on last night's "Parks" season finale, we review her many TV appearances 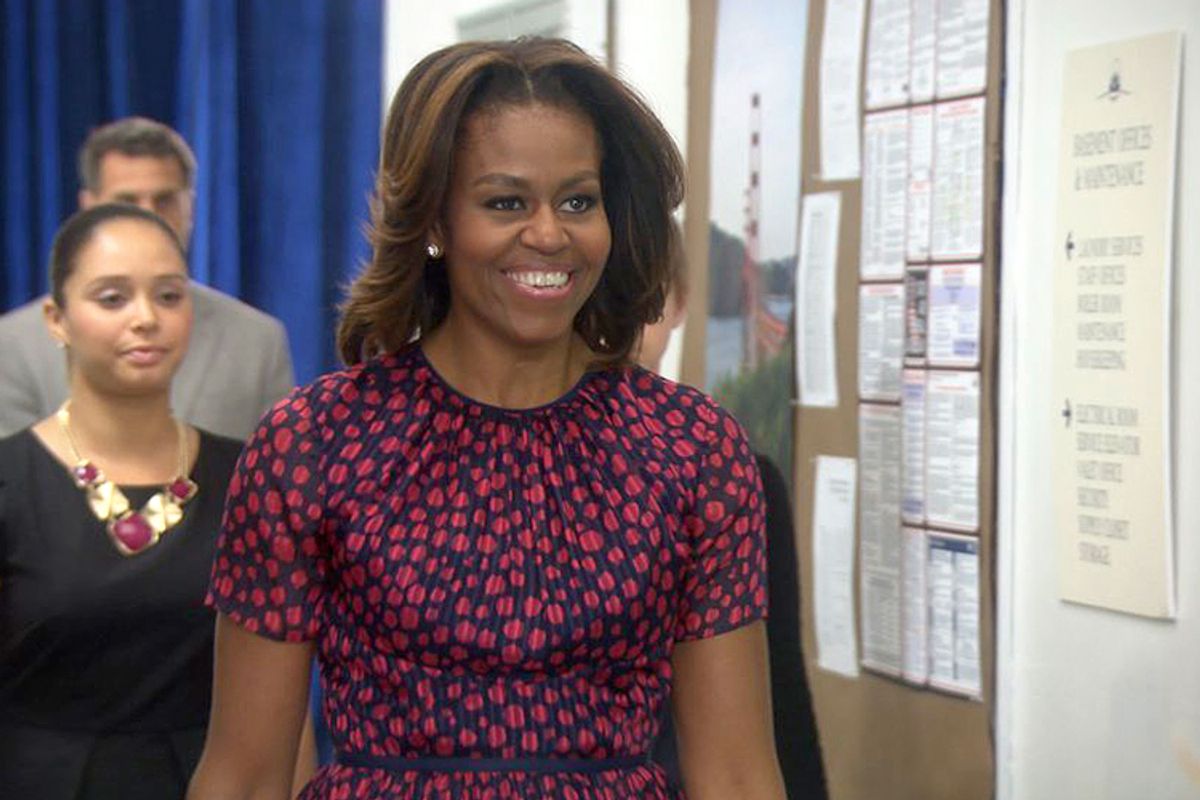 Michelle Obama may well be the most media-friendly first lady of all time, and not merely because there’s a lot more media for her to be friendly to than there was for, say, Julia Grant or Pat Nixon. But she’s also been incredibly -- and increasingly -- willing, over the course of her husband’s presidency, to make the occasional TV cameo. Nancy Reagan, who was a real-life actress early in her life, did just one sitcom appearance, on “Diff’rent Strokes”; the current first lady will have appeared three times on Nickelodeon alone by the time she leaves the White House. (Maybe more!)

And it seems she’s just getting started. Mrs. Obama has announced cameos on the Nick kids’ show “Jessie” and on ABC’s country-music soap “Nashville” before the end of the TV season. Last night, she had a guest spot on the season finale of “Parks and Recreation”: The first lady played herself, as the keynote speaker of a conference protagonist Leslie Knope (Amy Poehler) attended -- and when the two met by chance, Mrs. Obama's chill sangfroid was a perfect match for Ms. Knope's golden-retriever mania, and there was even a subtle (and by-this-point-familiar) plug for the "Let's Move" program. The high-five the pair exchanged felt earned, a meeting of minds between two, to put it mildly, very different women in politics.

But “Parks and Recreation” has featured political cameos before -- most notably Vice President Joe Biden, the object of Leslie Knope’s lifelong obsession. The Obama family famously watches the show, and Biden may well have assured Michelle Obama that this was a very safe space. But Michelle Obama's TV cameo career has ranged wildly -- after all, not every media outlet is a fit for a first fady. So here is the definitive ranking of her TV appearances since the 2008 election, from lamest to greatest:

8) The Puppy Bowl, 2014: Mrs. Obama was out of her element here. Her message to Americans that walking with puppies is a good way to get exercise is laudable enough (if a bit random) but her “Let the Puppy Bowl begin!” feels almost certainly like the result of a single take. Let me be clear: Michelle Obama is excited about the Puppy Bowl.

7) The Academy Awards, 2013: The first lady gets knocked down a few points for her choice of venue. Sure, she was likely excited to appear on a high-rated and glamorous broadcast in a new set of bangs just after her husband’s second inaugural, but from the choice of introducer (Jack Nicholson, who rambled to the point of incoherency) to category, the whole thing was risky. On the off chance that “Zero Dark Thirty” or “Django Unchained” had won the best picture trophy, the liberal and conservative press would have had a field day. But leaving aside worst-case scenarios beyond her control, Obama did exactly what she needed to: add a touch of gravitas to the proceedings of a thoroughly superficial awards show.

6) “Late Night With Jimmy Fallon,” 2013: There’s no way around it: Seeing the first lady play a be-braced teenager repeatedly yelling “Ew!” was deeply weird. The message seems to be that Mrs. Obama can play one character: herself. She may have presented at the Oscars, but she sure isn’t going to win one.

5) “The Biggest Loser,” 2012: Michelle Obama’s media appearances often seem designed to convey that she’s a regular person. Sometimes -- as on Fallon -- this doesn’t quite work out. But her pain and frustration during a workout on this weight-loss show were nicely humanizing, even if we never thought we’d see a first lady begging for a towel on network TV.

4.) “iCarly,” 2012: She genuinely seemed to be having fun with the cast of the kiddie show, and, unlike her “Fallon” appearance, she was able to remain the star of the show. She also wisely left the heavy comedic lifting to the professionals.

3) "Sesame Street," 2009: This would have been her greatest performance of all if she’d managed to seem less annoyed at Big Bird’s childlike line of interrogation about whether she eats seeds. The rest, though, shows her using an appropriate venue to send a real message.

2) Billboard Music Awards (2011): Michelle Obama seemed genuinely moved delivering a video testimonial about Beyoncé. Where was this passion during the Puppy Bowl? This may be the greatest Michelle Obama performance of all time -- both dignified enough to fit the office (somehow, given that she was introducing a Beyoncé performance on a Fox awards show) and fairly human in a way even a Beyoncé hater (they do exist) could endorse.

1) "Late Night With Jimmy Fallon," 2013: “The Evolution of Mom Dancing” was Mobama at her best. It’s perhaps the most famous of her TV appearances, for good reason. The first lady gamely did the sprinkler and the shopping-cart -- and if it seemed a little de-glammed, it was her, for once, in what seemed like what she's told us, in interviews, is her comfort zone. She actually is a mom! And the only cause she was advocating was moving one's body, not for exercise, but for fun. Perhaps it's only in the very exact moment post-election that Michelle Obama could let her inner dork out. For now, we'll just hope not to relive the Puppy Bowl.