"I'm gonna need you to come in on Saturday": How "Office Space" got the modern workplace just right

Cubicles, layoffs, TPS report, flair -- "Office Space" bombed at the box office, but endures because it was right 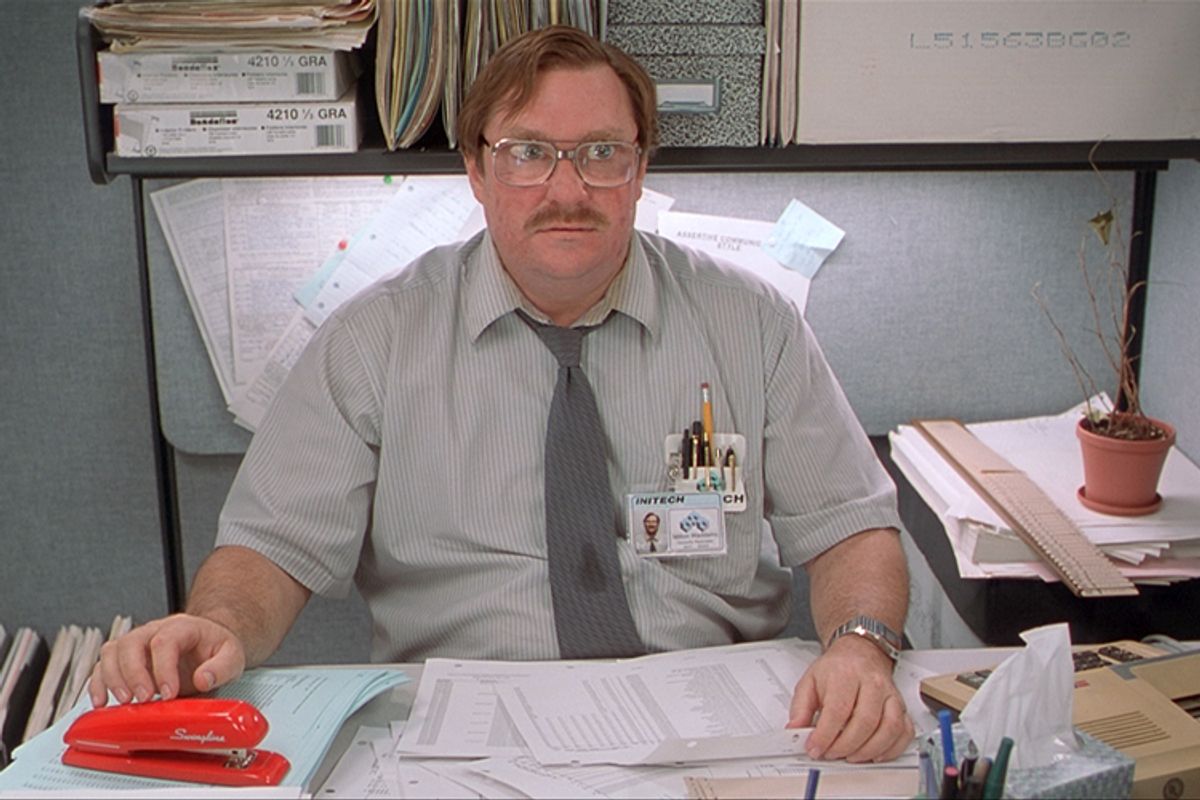 Excerpted from "Cubed: A Secret History of the Workplace"

The office could be any office. Cove fluorescents on a dimmer, modular shelving, the desk practically an abstraction. The whisper of sourceless ventilation. You are a trained observer and there is nothing to observe.
—David Foster Wallace, "The Pale King"

After the stock market crash, which emptied out the lofts and warehouses of San Francisco, eroding in an instant the frictionless, cloud-kicking fantasies of the dot-commers, another white-collar recession slung into place, and the office seemed to resume its role as the workplace everyone loved to hate.

Few cultural objects expressed this miasma of ill will better than the film "Office Space," which appeared in 1999 at the very peak of the boom. Its theatrical run was a modest failure, but in retrospect it’s no surprise that a film so relentlessly dark and nasty would be overpowered by the delirium that gripped the end of the millennium. (From a reporter visiting a Microsoft annual meeting in 1997: “‘Why  are we at Microsoft? ’ bellowed billionaire Steve Ballmer, then the company’s executive vice president, to a crowd of nine thousand employees packed into the Kingdome, Seattle’s indoor stadium. ‘For  the money! ’ he screamed. ‘Show me the money! ’ The crowd responded with a roar: ‘Show me the money! ’ ”) Running gags about staplers, misplaced memos, “Hawaiian Shirt Day,” and the specter of working lives wasted in dead-end, purposeless jobs for a gray tech company: no one appeared ready for that sort of humor in an era of raging exuberance—and anyway, the cubicle was dead, right? Then the bubble burst; people woke up the following morning with their stock options erased; the beanbag chairs were gone, and they were in a cubicle again or unemployed  and desperately searching for a cubicle. "Office Space" found new life on the small screen, a medium that suited the office worker existence depicted in the film: long days huddled in front of a computer, followed by short nights exhausted on the couch, staring at a television. In 1999 it barely recovered its $10 million budget in box office receipts; by 2003, it had become a cult classic, with more than two and a half million copies sold on video. (It screens on Comedy Central with the sort of mindless regularity that suggests a bored television office staff behind  it all. “What  do we fill the 2 to 5 p.m. slot with? ” “Fuck it, let’s just put on 'Office Space' again.”)

Everyone knows very happy white-collar people who can quote "Office Space" with as much fervor and accuracy as a pastor does the Gospels, and it’s a plausible  and routine  assumption that  repeated watchings of the film might offer a kind of therapy for stressed office workers:  a vent for an inarticulate rage that helps keep them humming away at bad jobs. But anecdotally,  at least, it’s led to people quitting their jobs, and one Portland, Oregon, webmaster started a site, Bullshit Job, that doubled  as both a tribute  to the film and a page where workers could post all the insulting memos and e-mails their bosses sent out.  In other words, "Office Space," and subsequent works in the general fraternity  of office satire, helped office workers recognize themselves as belonging to a particular kind of group—a recognition  that  the office always seemed to deny, since no matter where you were in the office, you were always presumed to be on your  way up. (Think of that line from the Stanwyck  film: “Baby Face is moving out of your class.”) And part of the brilliance of the film was its insistence that the jobs weren’t bad simply because the office workers were oppressed: they were intrinsically bad jobs, in a bad environment.

The setup for "Office Space" represents a larger shift in the understanding of office life. The paradigmatic narrative had been the entry of the rural woman into urban white-collar life, with its attendant sexual terrors; by mid-century, it was the travails of the middle manager attempting to avoid the conformist spirit of organizational life. But the plot of "Office Space"—reflecting the larger changes in the American economy—is about people being forced to leave an environment they hate, through layoffs; the same is true of the British show "The Office" (called, in an even more insulting euphemism, “redundancies”) and  of the  recent American novels of office life "Then We Came to the End" and "Personal Days." The prospect of losing one’s job forces the personal crisis: you come to know who your friends are, what your loyalties are worth, and what your job really is. In "Office Space," consultants come to examine the company’s structure  to give it a leaner  form; though their method  is unjust, they really do find people working useless jobs:

BOB SLYDELL ( JOHN C. McGINLEY) : What you do at Initech is you take the specifications from the customers, and you bring them down to the software engineers.

BOB PORTER (PAUL WILLSON) : Well, then, I have to ask—why couldn’t the customers just take them directly to the software people?

TOM: I’ll tell you why. Because engineers are not good at dealing with customers.

SLYDELL: So you physically take the specs from the customer?

PORTER : So then you must physically bring them to the software people?

SLYDELL: What would you say you do here?

TOM : Well, look, I already told you. I deal with the goddamn customers so the engineers don’t have to. (Screaming.) I have people skills! I am good at dealing with people! Can’t you understand that? What the hell is wrong with you people?

Tom Smykowski is defensive about his job, even though he can’t explain what it is he does. Peter Gibbons (Ron Livingston), the main protagonist, knows that his job—updating software for the Y2K switch—sucks, and he knows that it’s meaningless; from the vantage point of the new millennium, it seems especially useless. Struggling to explain it to a waitress, Joanna (Jennifer Aniston), he says, “I sit in a cubicle, and I update bank software for the 2000 switch. Well, see they wrote all this bank software, and to save space they used two digits instead of four, so like 98 instead of 1998, uh, so I go through these thousands of lines of code and uh . . . It doesn’t really matter.  I don’t like my job.” Later Peter confesses to the consultants that his average workday consists of coming in fifteen minutes late and “just sort of spac[ing] out for about  an hour  . . . I do that for about another hour after lunch too. I’d say in a given week, I only do about fifteen minutes of real, actual work.”

The twist is that this honesty is exactly  what  the consultants prize—a kind of ironized version of the “truth-telling” organization man of "The Man in the Gray Flannel Suit." Though Peter stops showing up to work and wrecks his work space by dismantling his cubicle walls, the consultants offer him a promotion. “[He’s] just a straight shooter with upper management written all over him,” one consultant says to Peter’s boss. In return, however, they fire two engineers with actual experience, who happen to be Peter’s friends. This sets in motion the increasingly madcap (and implausible) third act, when Peter and his laid-off friends try to program  a virus that would scam the company they despise out of thousands of dollars. At the end of the film, one of the company’s  disgruntled employees, the sublime mutterer  Milton Waddams (Stephen Root), sets the building on fire. Peter’s engineer friends have moved from Initech to its competitor Initrode; Peter himself takes a blue-collar job in construction—preferring the outdoor life to his stationary warren of cubicles.

"Office Space" occupies such a tremendous place in the American office worker’s imaginary about his workplace  it’s a shame that its effect—or  the effect of the larger discourse  it’s a part  of—has tended to be shallow and focused on the cubicle and dumb bosses. The “space” in "Office Space" was largely a symbol—of an uncaring, even ruthless  organization. Its real targets  were the unholy expectations  of the modern  workplace,  which asked for dedication and commitment, offering none in return. It doubled the force of its condemnation by extending it to other kinds of workplaces. The waitress Joanna works in a chain diner called Chotchkie’s, whose absurd expectations closely resemble those of the office. Part of her job involves donning wacky buttons with slogans and symbols on them, called “flair.” At one point, her boss takes her aside to chastise her about her flair.

JOANNA : Really? I have fifteen pieces on (demonstrating).

STAN : Fifteen is the minimum, mmkay. It’s up to you whether you want to just do the bare minimum. Brian for example has thirty-seven pieces of flair—and a terrific smile.

JOANNA : Okay, so you want me to wear more?

STAN : (Sighing.) Look, Joanna,  people can get a cheeseburger anywhere, they come to Chotchkie’s for the atmosphere  and the attitude. That’s what the flair’s about. It’s about fun.

Joanna’s boss occupies the same place as the office consultants: looking for intangible, personality-based outward expressions as signs of being a “straight  shooter”—rather than establishing obvious benchmarks that one meets simply to garner a paycheck. Her suspenders laden with flair suggest nothing  so much as cubicle walls, decked out to show one’s “individuality.” The human attachments in "Office Space" were so strange and obsessive—Milton and his now infamous need to keep his red Swingline stapler—that it was hard to believe there was anything still left to express. Those  still immune  to the satire  of flair, however,  are encouraged  to check out  the catalogs of the office supplier  Baudville, which offers, among other  choice items, rhinestone-encrusted lanyards as well as T-shirts  for appreciation weeks with slogans like “Smells like Team Spirit” and “I Put the ‘Zing’ in Amazing.”

After such knowledge as "Office Space" offered, what  orgiveness? How could one acknowledge the essential failure of the office to deliver on its promised utopia—and go on as if nothing had happened? For many, the question was merely rhetorical:  they were out of work and stringing together temporary gigs as best they could. But for others, the dream of a better office lived on in different ways: some saw technology  as still offering a way of moving office work out of the office, into a broader  sphere of public life; others saw that the office needed to be made vastly more humane and responsive to its increasingly apathetic denizens. These two paths were united by a single goal: the desire to make work enjoyable, to return it to an innocence that generations of workplace mistakes had rendered corrupt.  In an arresting and bleak phrase, the sociologist Max Weber had described the progress of rationality and scientific demystification as leading to a gradual “disenchantment of the world.” Something like that had happened  to office work: the rosy image of the office as a distinct,  and  distinctly  middle-class, alternative  to the travails  of factory  work  and other  manual  labor  had suffered too many jolts to survive. The office would have to be re-enchanted.

Excerpted from "Cubed: A Secret History of the Workplace" by Nikil Saval. Published by Doubleday, a division of Random House. Copyright 2014 by Nikil Saval. Reprinted with permission of the publisher. All rights reserved.