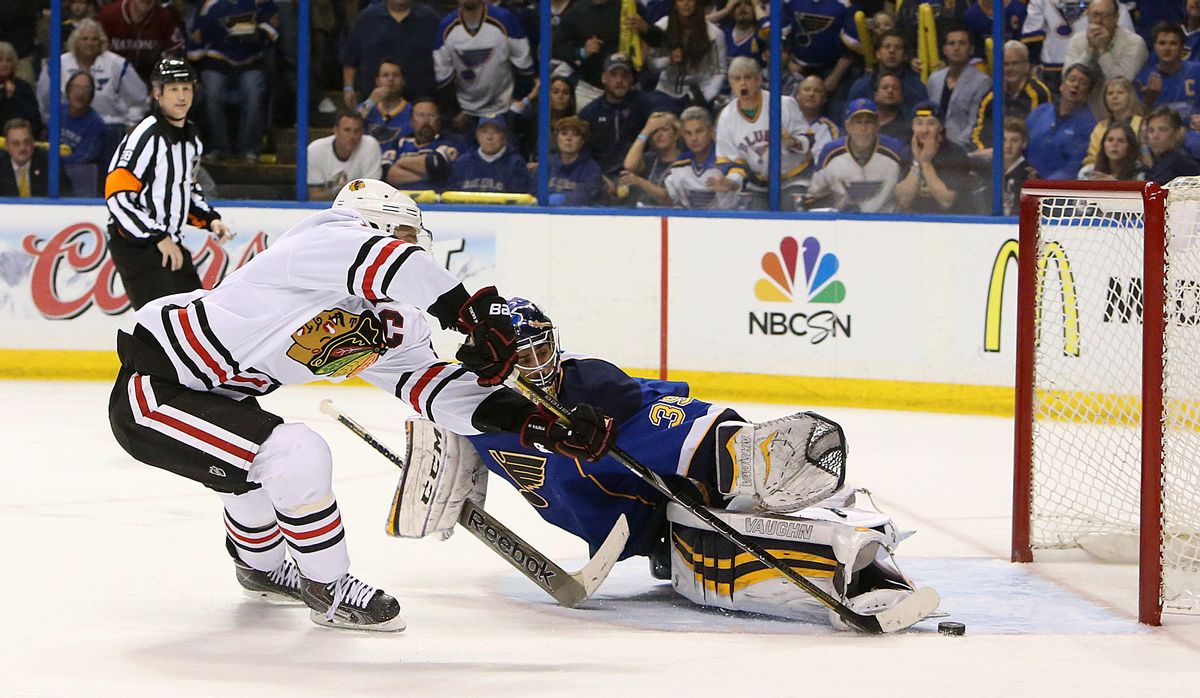 The Chicago Blackhawks captain made the most of a lucky carom, scoring on a breakaway in overtime to beat the St. Louis Blues 3-2 on Friday night and give the defending Stanley Cup champions a 3-2 series lead.

"Oh, I'm not going to give myself that much credit," Keith said. "Maybe some guys would. Lucky break by us."

The Blues had control before Blackhawks goalie Corey Crawford stopped a shot by David Backes.

Seconds later, the Blackhawks were in command. They've taken three straight in an ultra-tight series that's had four overtimes, and can wrap up the series at home with Game 6 set for Sunday.

"It's huge, it's a great opportunity," Toews said. "But you know it's going to take our best effort that we've had so far, and I think we're ready to give that."

Momentum changed quickly on the winner.

Keith's clearing attempt deflected off Andrew Shaw's shin pad and right to Toews alone at center ice coming off a change and catching the Blues defense on a change. He charged the net with Jordan Leopold and Jay Bouwmeester in futile pursuit, then threw a few fakes at goalie Ryan Miller — the player the Blues acquired to make a Cup run — before scoring on a backhander at 7:36 of overtime.

"I wasn't even sure where their D-men were," Toews said. "Just got going as fast as I could. Take advantage of a chance."

"I was just saying to some of the guys in the other room, I'm trying to get the puck out of the zone and all of a sudden it lands on his stick," Keith said. "Couldn't believe it. So, I was pretty happy seeing that."

St. Louis defenseman Roman Polak saw Toews coming off the bench but reasoned that the Blues had control, so he left the ice about the same time Backes was shooting. Replacement Jay Bouwmeester never had a chance and Toews also got behind Jordan Leopold.

"What's pouting going to do?" St. Louis forward Alexander Steen said. "You just get back on the horse. It's a game. You have to win four. They have three, we have two. Off to Chicago we go. See you there."

All three of the Blues' home games went to overtime and St. Louis won the first two.

Before Toews scored, the top offensive threats in the series had been neutralized in Game 5. Patrick Kane and Toews combined for one assist in regulation and the Blues' Vladimir Tarasenko, who entered with an NHL-leading four goals in the playoffs, was held to two shots.

The first four goals came from players scoring for the first time in the series.

Pietrangelo entered averaging more than 31 minutes in the series, most on either team, but has been a reluctant shooter with five shots in the first four games. His second career playoff goal came on a 2-on-1 break with Jaden Schwartz with the teams at 4-on-4 to tie it at 2 early in the third.

Backes returned for the Blues while Blackhawks defenseman Brent Seabrook finished a three-game suspension from the illegal hit that knocked the St. Louis captain woozy in Game 2. But the Blues didn't make the most of that emotional lift early, getting their first scoring chance at about the 12-minute mark, totaling one shot on two early power plays and trailing 1-0 after the first.

The Blackhawks started the scoring for the third straight game, capitalizing when Polak got caught pinching at the blue line. Bryan Bickell led a 2-on-1 break and Hossa tapped his own rebound into a wide open net at 16:11 of the first period.

On his knees, Oshie lifted a backhander over Crawford's stick to tie it at 11:04 of the second period. Six minutes later, Smith tapped in a backhander after a St. Louis defender stopped Sheldon Brookbank's slap shot from the point.

NOTES: All three games in St. Louis have attracted standing room crowds, with 19,796 showing up on a busy sports night downtown with the defending National League champion Cardinals playing the Pirates a few blocks east. ... Oshie totaled three shots and was minus-3 his first three games back from an illegal check to the head late in the regular season from Minnesota's Brian Rupp, who was suspended four games. Oshie said Thursday he might have returned a game too soon.