A tale of four popes: Today Pope Francis canonized two predecessors in the presence of another

Retired Pope Benedict XVI was there: It was the first time ever that a retired and reigning pope had Mass together 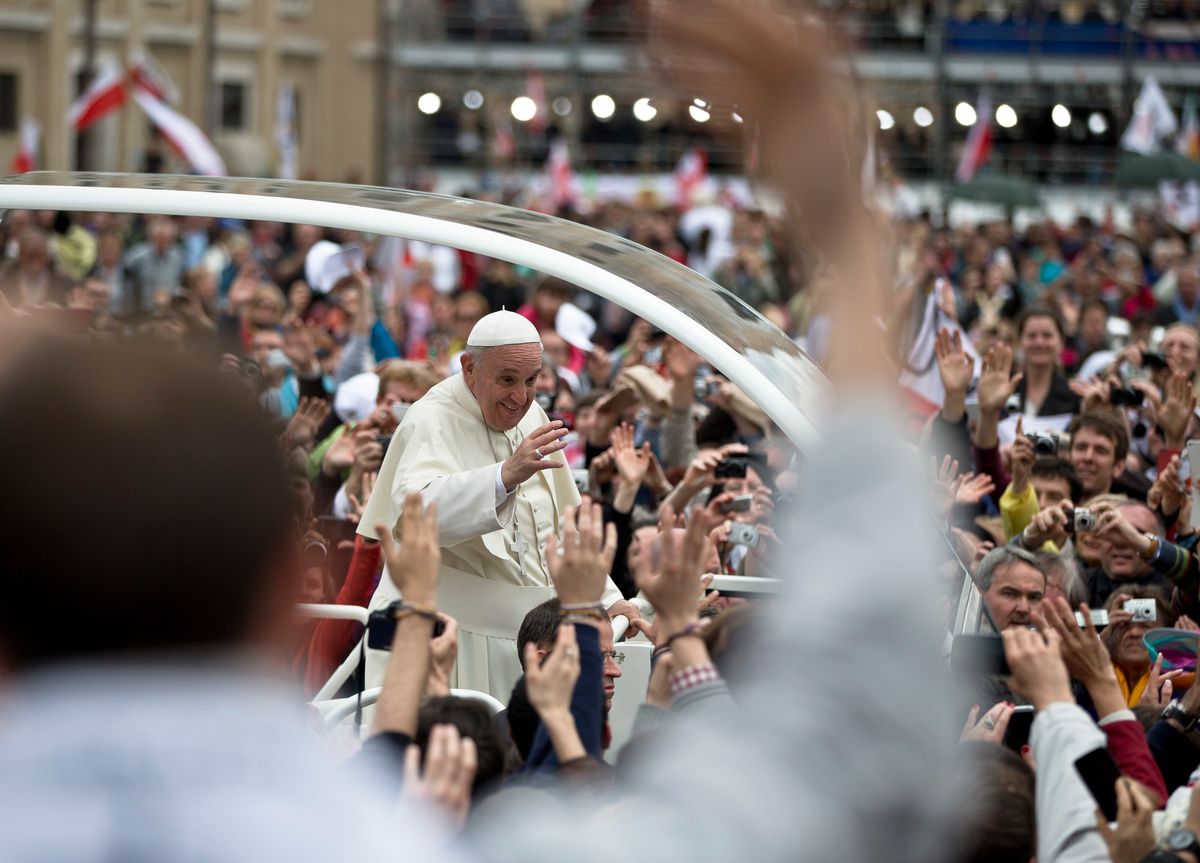 Pope Francis is driven through the crowd in St. Peter's Square at the Vatican, Sunday, April 27, 2014. Pope Francis has declared his two predecessors John XXIII and John Paul II saints in an unprecedented canonization ceremony made even more historic by the presence of retired Pope Benedict XVI. (AP Photo/Vadim Ghirda) (Vadim Ghirda)
--

VATICAN CITY (AP) -- Two 20th-century popes who changed the course of the Catholic Church became saints Sunday as Pope Francis honored John XXIII and John Paul II in a delicate balancing act aimed at bringing together the conservative and progressive wings of the church.

As if to drive the message of unity home, Francis invited retired Pope Benedict XVI to join him on the altar of St. Peter's Square, the first time a reigning and retired pope have celebrated Mass together in public in the 2,000-year history of the church.

An estimated 800,000 people - many of them from John Paul's native Poland - filled St. Peter's, the streets around it and bridges over the Tiber River, a huge turnout but only half the size of the crowd that came out for John Paul's 2011 beatification.

John reigned from 1958-1963 and is a hero to liberal Catholics for having convened the Second Vatican Council. The meetings brought the church into the modern era by allowing Mass to be celebrated in local languages rather than Latin and encouraged greater dialogue with people of other faiths, particularly Jews.

During his globe-trotting, quarter-century papacy, John Paul II helped topple communism and invigorated a new generation of Catholics, while his defense of core church teaching on abortion, marriage and other hot-button issues heartened conservatives after the turbulent 1960s.

Benedict was one of John Paul's closest confidantes and went on to preside over a deeply tradition-minded eight-year papacy. His successor Francis seems a pope much more inspired by the pastoral, simple style of the "good pope" John.

Yet Francis offered each new saint heartfelt praise in his homily, saying John had allowed himself to be led by God to call the council, and hailing John Paul's focus on the family. It's an issue that Francis has asked the church as a whole to take up for discussion with a two-year debate starting this fall.

"They were priests, bishops and popes of the 20th century," Francis said. "They lived through the tragic events of that century, but they were not overwhelmed by them."

Benedict put John Paul on the fast-track for possible sainthood just weeks after his 2005 death, responding to the chants of "Santo Subito!" or "Sainthood Now!" that erupted during his funeral Mass. John Paul's canonization is now the fastest in modern times.

John's sainthood run, on the other hand, languished after his 2000 beatification. Rather than let John Paul have the limelight with a canonization on his own - emboldening many in the conservative wing of the church - Francis decided to pair him up with John. To do so, Francis tweaked the Vatican's own saint-making rules, deciding that John could be made a saint alongside John Paul without the necessary second miracle usually required.

Francis sounded a note of continuity in his homily, praising John for having called the council and John Paul for helping implement it.

"John XXIII and John Paul II cooperated with the Holy Spirit in renewing and updating the church in keeping with her pristine features, those features which the saints have given her throughout the centuries," Francis said.

During the ceremony, Francis took a deep breath and paused for a moment before reciting the saint-making formula in Latin, as if moved by the history he was about to make in canonizing two popes at once.

As soon as he did so, applause broke out from a crowd in St. Peter's and beyond.

"This is such a historic moment," marveled the Rev. Victor Perez, who brought a group of students from the John Paul High School in Houston, Texas and waited for nearly 12 hours to get near St. Peter's. "John Paul was so impactful on the church. He completed the work of Vatican II. Today honors the last 50 years of what God has done in the church."

"He changed Poland and he changed us with his teaching and with his visits here," an emotional Maria Jurek said as she watched the proceedings on giant TV screens at a sanctuary dedicated to John Paul in Krakow.

In the Philippines, where John Paul in 1995 drew the largest ever crowd for a papal Mass at 4 million, Filipinos watched the canonization on TV and joined local celebrations, including a suburban Manila parade of children dressed like the pope.

Yet the atmosphere in St. Peter's seemed somber and subdued - perhaps because of the chilly gray skies and cumulative lack of sleep of many of the pilgrims who camped out on streets near the Vatican. It was a far different scene from the rollicking party atmosphere of John Paul's May 2011 beatification, when bands of young people sang, danced and cheered before, during and after the Mass.

Spirits though did pick up after the service when Francis drove through the square and all the way down to the Tiber River in his open-topped car, giving many people their first - and only - close-up glimpse of him.

The Vatican estimated that 800,000 people watched the Mass in Rome, with about 500,000 in the square and nearby streets and the rest watching on TV screens that had been set up in piazzas around town.

Polish pilgrims carrying the red and white flags of John Paul's beloved homeland had been among the first to push into the square well before sunrise, as the human chains of neon-vested civil protection workers trying to maintain order finally gave up and let them in.

And while it was supposed to be a canonization for two men, it was clear that the vast majority of people who turned out were there for John Paul.

"John Paul was our pope," said Therese Andjoua, a 49-year-old nurse who traveled from Libreville, Gabon, with some 300 other pilgrims to attend. She sported a traditional African dress bearing the images of both new saints.

"In 1982, he came to Gabon and when he arrived he kissed the ground and told us to `Get up, go forward and be not afraid,'" she recalled as she rested against a pallet of water bottles. "When we heard he was going to be canonized, we got up."

Kings, queens, presidents and prime ministers from more than 90 countries attended. About 20 Jewish leaders from the U.S., Israel, Italy, Francis' native Argentina and Poland also took part, in a clear sign of their appreciation for the great strides made in Catholic-Jewish relations under John, John Paul and their successors celebrating their sainthood.

Benedict's presence on the altar with them was as remarkable as the historic canonization itself.

Benedict had promised to remain "hidden from the world" after resigning last year, but Francis has coaxed him out of retirement and urged him to take part in the public life of the church.

During the Mass, Benedict sat off to the side of the altar with other cardinals, though he was clearly in a place of honor. He received the Italian president and a steady stream of cardinals. Francis himself embraced Benedict at the beginning and end of the service.

Benedict had arrived in the square on his own to cheers and applause, wearing the same white vestments and white bishops' miter as other cardinals. The only difference was he had a white skullcap on rather than red.