The New Deal awakened in Americans a fervent desire to make change. And it could happen again 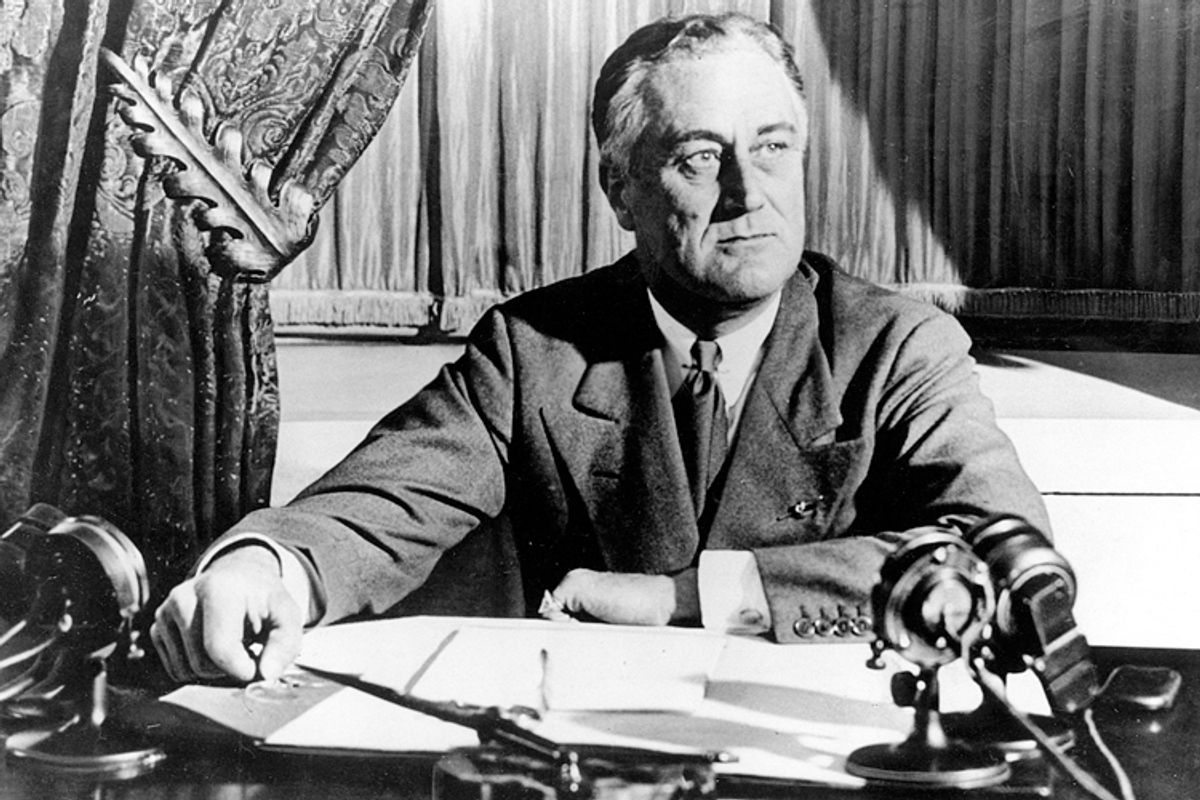 Excerpted from “The Four Freedoms: What Made FDR and the Greatest Generation Truly Great.”

By 1936, Franklin Delano Roosevelt had mobilized the nation. Indeed, reinvigorating popular hopes, aspirations, and energies, he had also unleashed a great democratic surge in which workers, farmers, women, minorities, in­tellectuals, students, and others were challenging the propertied and powerful in favor of extending and deepening freedom, equality, and democracy.

Working people, in particular, embraced FDR. Forever recalling how he “lifted their spirits” and restored their belief in themselves, they carried his image in demonstrations and hung it in their homes, often right alongside one of Jesus. Broadway lyricists and Mississippi Delta blues artists alike composed songs in his honor. Black families named their children Franklin and Eleanor. Speaking for laboring men and women of every race and region, a white South Carolina millhand wrote that Roosevelt is “the first man in the White House to under­stand that my boss is a son of a bitch.” Yet the relationship involved more than appreciation and affection. Rexford Tugwell would observe years later that somehow “ordinary” people understood Roosevelt better than anyone and, doing so, they “adopted” him as their “champion.” There was, however, even more to it. Doing so enabled them to act in their own behalf in dramatic, new ways. Hearing talk of “fulfilling American ideals,” action “from the bottom up,” and “economic rights,” they rallied to FDR’s New Deal by joining together to reclaim—or, for the first time, lay claim to— America. Responding to a Fireside Chat invitation to tell him of their “troubles,” workers, who made up 46 percent of all of those who wrote, sent him millions of letters. And agreeing with him or not, their words regularly confirmed that they understood that America’s greatness de­pended not simply on his actions, but also on their own determination and solidarity—or, as the black labor leader A. Philip Randolph would declare, that “Freedom is never given. It is won.”

In fact, American workers moved even faster than the President to take up the struggle—and they were prepared to take it further.

Signed into law in June 1933, the NIRA—titled labor’s “Magna Carta” by AFL president William Green—instigated almost 2 million workers, skilled, semiskilled, and unskilled, to flood into the labor movement. Referring to it as “a virtual uprising . . . for union mem­bership,” an AFL executive council memo observed that workers themselves “held mass meetings and sent word they wanted to be or­ganized.” Viewing it as “a picture of the opening of the gates of free­dom,” the Plumbers and Steam Fitters’ head, Thomas Burke, jubilantly wrote: “Men who never dared consider joining a union now come for­ward openly, eagerly and joyously.” And the Russian-Jewish immigrant and ILGWU organizer Rose Pesotta would warmly recall that the “Un­organized workers who had never before raised the question of their rights . . . and who had accepted whatever they were given as inevita­ble, suddenly awakened to the fact that they were part of a great dem­ocratic nation.”

In just one year’s time the UMW leapt from 50,000 to 300,000 members; the ACWA from 60,000 to 120,000; and the ILGWU from 40,000 to 200,000. Making it all the more challenging, the indus­trial unions remained committed to interethnic and interracial labor solidarity, even in the face of workers’ own persistent prejudices. Pe­sotta, for one, would proudly recall the sense of unity she felt when, at the 1933 ILGWU convention, she and her union brothers and sisters moved the entire gathering from one hotel to another rather than tol­erate “Jim Crowism.”

Industrial labor organizers and activists promoted anew labor’s “Americanism” of democratic rights and material security. And those ideals inspired workers in every region and in all their diversity to em­brace the New Deal, sign union cards, and carry the Stars and Stripes into action. Rose Pesotta would recount hearing young Mexican dress­makers in Los Angeles speak of how those ideals made them want to become “American citizens”—and notably, 1934 saw a “marked acceleration in initial requests for naturalization papers” from the Mexican-born.

Craft unions expanded, too, as hundreds of thousands of semiskilled workers in the steel, rubber, auto, textiles, and other mass-production in­dustries sought admission. Blinkered by their own prejudice, most AFL leaders remained skeptical of semiskilled “ethnics,” thereby compound­ing the challenge of incorporating their vast numbers to their skilled brotherhoods. Pressed to do something, and hoping thereby to restrain the newcomers’ exuberant militancy, they set up temporary “federal unions” under their own direct authority—all of which served to anger their industrial-union colleagues, frustrate the workers themselves, and enable fast-acting corporate managers to corral eager-to-be-organized employees into company unions that, doubling their memberships to 2.5 million, actually grew faster than labor’s own.

With or without the federation’s approval, workers acted. A total of 2,500,000 of them carried out work stoppages in 1933–34, turn­ing some into large-scale events. Led by radicals, Toledo autoworkers, Minneapolis teamsters, and San Francisco longshoremen staged strikes that spring and summer which—meeting with violence from bosses and local officials, but garnering the active support of other unions and unemployed councils—resulted in city-wide battles in Toledo and Minneapolis and a general strike in San Francisco that shut down the entire Bay Area and every port on the West Coast. Then, in Septem­ber, 400,000 textile workers from New England to the Deep South, proudly bearing the American flag, struck for their democratic rights and to secure improvements in wages and working conditions. How­ever, they, too, encountered—in locales as different as Rhode Island and the Carolinas—business intransigence and the use of deadly force by guards, local police, and state militias.

Though Section 7(a) of the NIRA did not cover agricultural work­ers, they, too, organized. In California, 50 thousand Mexican, Filipino, and Anglo migrant farm laborers and cannery workers united to con­front employers and police, who viciously answered their demands with terror and force. And in Arkansas and surrounding states, thou­sands of courageous tenants and sharecroppers, black and white to­gether, joined the Christian-inspired and socialist-organized Southern Tenant Farmers’ Union (STFU) seeking redress for their treatment by planters and the AAA.

Labor led the democratic surge, but more than workers asserted themselves. Upper midwestern family farmers backed the Wisconsin Progressive and Minnesota Farmer-Labor parties, both of which prom­ised to back the New Deal.

Spurred by labor’s new energies and the Roosevelt administration’s calls for consumer activism, middle- and working-class women mobi­lized. National Consumers’ League activists not only lobbied for addi­tional regulation of food prices, but also aligned themselves with both black groups fighting the racism of the new industrial codes and unions demanding enforcement of the NIRA’s Section 7(a). And New York housewives, ever more vocally protesting rising prices, organized into neighborhood “councils” and gave birth to a national “housewives movement” when, in response to soaring meat prices, they initiated boycotts of butcher shops in the spring of 1935 that quickly spread across the country and came to include women of every background.

Meanwhile, in contrast to the 1920s, writers and artists were now feeling, as the composer Aaron Copland would recall, “the desire to be ‘American.’” And they set out, as the writer Alfred Kazin put it, “to re­cover America as an idea.” Even Communist intellectuals, who had pre­viously scorned both liberal democracy and other leftists, took up the project in 1935 after receiving welcomed new party directives from Mos­cow. They, too, now worked to form a broad antifascist “Popular Front” and a “cultural front” to promote the causes of labor and democracy.

Some intellectuals took to the road to witness and document de­velopments. Others turned to the past. No one expressed the radical-democratic spirit of the day better than the worker and labor organizer turned poet Carl Sandburg, whose book "The People, Yes" was as affir­mative and embracing as its title. But whether reporting on the state of the nation and the “forgotten man” or recovering America’s pro­gressive tradition, all were giving voice to experiences and ideas long suppressed by conservatives or mockingly dismissed by debunkers that might further energize the nation’s democratic impulse.

Black political-intellectual life also experienced a new ferment. Still attached to the party of Lincoln, most African Americans voted for Hoover in 1932. But as the New Deal began to take off, black leaders saw new possibilities emerging. The NAACP president Joel Spingarn, himself white, convened an August 1933 gathering of the most prom­ising young black intellectuals to discuss how they might now address the needs of African Americans. Known as the Second Amenia Con­ference, the meeting revealed a division between those who favored continuing the specific quest for civil and political rights and those like the radical Howard University social scientists Abram Harris, Jr., E. Franklin Frazier, and Ralph Bunche who wanted to develop an ap­proach linked to labor and the Left. Both strategies would be pursued, but somewhat separately. Led by its new executive secretary, Walter White, and its chief counsel, Charles Hamilton Houston, the NAACP would challenge racism and segregation by lobbying for federal anti­lynching legislation, by suing southern states to honor the “equal” in “separate but equal,” and by demanding an end to the “all-white pri­maries” and poll taxes that effectively disfranchised black citizens. And seeking to secure social and economic changes as well, more radical figures such as Harris and Bunche joined with A. Philip Randolph and others to organize the National Negro Congress (NNC) in 1935.

Southern blacks faced great danger in confronting white author­ity. And yet many did so. Thousands enlisted in unions like the STFU and UMW. Some not only bravely banded together in “political clubs,” but also daringly tried, as early as 1934, to participate in the all-white Democratic primaries of South Carolina, Georgia, Alabama, and Texas. Meanwhile, 400,000 others headed north, where they quickly registered to vote and fervently contributed to making blacks a signifi­cant urban political force.

Traditionally conservative, college students in the tens and, soon, hundreds of thousands also mobilized and began to stage demonstrations in favor of causes from antimilitarism to civil rights and civil lib­erties. Pioneering the Popular Front, the Socialist Student League for Industrial Democracy (SLID) and the Communist National Student League (NSL) joined with dozens of other young people’s organization in 1934 to create the American Youth Congress (AYC), which would come to include a politically diverse and both multifaith and multi­racial array of youth organizations representing a total membership of 4.5 million. While openly critical of the President for not providing adequate employment and educational opportunities (ironically, FDR himself had urged “American youth of all parties” to “Unite and Chal­lenge!”), its leaders would find a real champion in the First Lady.

Most Americans did not march or protest. But the majority—that is, of those who could vote—showed their support for Roosevelt at the midterm elections of 1934 by going against historical expectations and giving him and his party even larger majorities in both houses of Congress.