How "Mad Men" became the most controversial show on TV

The series has been heaped with honors and awards. But there's a reason the critical world turned against it 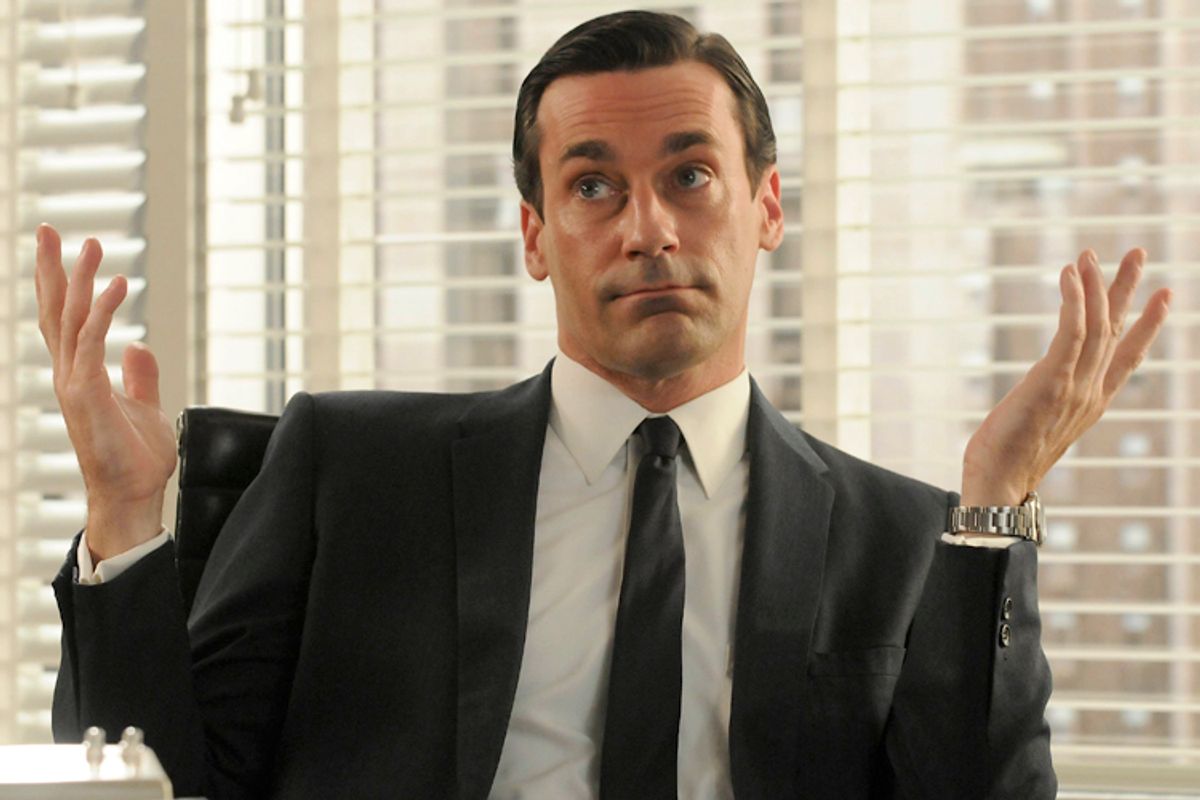 Seven years and 15 Emmys after “Mad Men” premiered, the TV-watching world seems to have split into two main camps: one claiming that the show is a probing look at how the postwar boom transitioned into the late 1960s, the other that it’s an over-costumed soap opera whose success says more about the needs of modern American viewers than any intrinsic artistic merit. In 2008, on the heels of the series’ first Emmy sweep, Mark Greif wrote the first dissent in The London Review of Books, calling the show an “unpleasant little entry in the genre of Now We Know Better.” Three years later, Daniel Mendelsohn eviscerated the show’s historical glibness in The New York Review of Books. And since then, the takedowns have continued rolling in. In Harper's, Jenny Diski called the show “puppetry, rather stiff in its groping for authenticity.” Now The New Republic’s Marc Tracy has accused the series of a “trying-too-hard brand of seriousness.” At this point, “Mad Men” has been so exhaustively covered that it's hard to imagine expending more words on the show itself. But by now the most interesting thing about show may be the controversy around it.

Just look at a recent Banana Republic catalogue, with its Don Draper-inspired line of suits. Tony Soprano or Walter White, despite the fairly universal adulation their shows have received, are surely unlikely to inspire a clothing line. More so than his contemporaries in the “Golden Age” of highbrow TV drama, Matthew Weiner has also created a commercial juggernaut. And that commercialization is not accidental. It’s exactly what riles the show’s detractors: “Mad Men” claims insight into a historical period, and then sentimentalizes it to sell product. Assessing the series’ quality becomes an exercise in distinguishing where "Mad Men" is pandering to its audience versus where, if at all, it has anything of substance to say about the period and the people who populated it. And it’s exactly this split personality — the desire to have it both ways, as dark antihero drama and glossy commodity — that has made the show so culturally divisive.

No one familiar with the history of the 1960s would argue that “Mad Men” is an accurate representation of its social, political or cultural context. Besides token nods to major events, the series doesn’t engage with its characters’ surroundings: we know Civil Rights “happens” and the counterculture “happens,” but we have no idea why. None of the underlying structural changes that America underwent after 1945 and that contributed to its later social upheavals — interstate highway construction, urban blight, corporate growth, increased geographical mobility — get a serious mention. We don’t see cars zipping swiftly down an interstate, or a middle class family relocating because dad’s company transferred him, or a single mom feeding her kids fast food. Instead, "Mad Men" bathes the period in a meticulously glamorized light. Watch impossibly magnetic Don, quiet bombshell Betty, sexy yet classy Joan or superbly confident Roger sip scotch or smoke cigars or hold beautiful handbags, and it’s clear that what Weiner is selling is an image of a glowing past — a prettier, simpler time when people knew their social roles and played them perfectly. It’s ideally pitched to stir nostalgia among viewers dealing with a diverse, pluralistic present.

And yet this romanticization of the past is in large part what has frustrated and confounded critics. Read through all of the takedowns, and it becomes clear that many of them share the same central grievance: In “You’ll Love the Way It Makes You Feel,” Greif accused the series of overdramatizing history solely for the purpose of making its audience feel at once superior and titillated: “Beneath the Now We Know Better is a whiff of Doesn’t That Look Good. The drinking, the cigarettes, the opportunity to slap your children!” In “The Mad Men Account,” Mendelsohn wrote that “the picture is too crude and the artist too pleased with himself,” accusing Weiner of milking the past for melodrama. Diski titled her dissent “Unfaithful,” and hammered the show for its overdetermined approach to the reality of the 1960s.

Tobacco executives moan about government regulations while coughing violently from their product. An advertising executive asks if his agency employs any Jews and his subordinate responds “Not on my watch.” Don barks at a female client who questions his decisions, “I'm not going to let a woman talk to me like this. This meeting is over.” For the viewer, it’s a pretty easy pill to swallow: We get our escapism, minus the guilt. We can admire Don’s certainty and his sexual appetite while judging him for his prejudices, just as we soak in Betty’s poise while pitying her for her limited possibilities. But as a critic, it can be hard to reconcile the show’s competing aims: the fact that an embedded critique of commercialism basically serves as a commercial itself.

The other much-lauded products of this particular golden moment in TV — “Breaking Bad,” “The Sopranos,” “The Wire” — have offered very different grist for the critical mill. These shows are complicated, and messy, and unabashedly repellent; they may romanticize the grim efficiency of their antiheroes, but they are not selling a beautified version of real history alongside them. But the more critics dug into “Mad Men,” the more it began to seem like little more than an exquisite empty shell. And now it finally seems that critical reaction and popular opinion may be colliding: the season 7 premiere saw the show’s worst ratings in years. Seven years after "Mad Men" began, each episode is still perfectly coherent, its themes and imagery telegraphed beautifully — but all the languid historical revisionism has come to seem increasingly dull.

Weiner’s commercialism sits uneasily with his art. His vivid, realistic characters are lodged in a cultural fantasy. Don Draper, sex symbol from a vanished era, is a believable embodiment of the limits and attractions of a man of his time. He wants, as he says, to “build something” with his career. He also has the entitlement typical of attractive males who made it in business at mid-century: he sleeps around, abuses alcohol and casually objectifies his underlings and wives. And he is never sure of exactly what he wants out of life because he’s never been forced to look at himself too closely. You could say the same about “Mad Men”: that, in its shiny self-regard, it takes its own appeal for granted.  It’s not easy to critique a show that is at once deliberately alienating in its themes and shamelessly ingratiating in its packaging. “Mad Men” wants you to find it twisted and layered and dark, but it also wants you to buy it.