Save our cities from tourists!

For the world's greatest cities, tourism has become both a blessing and a curse 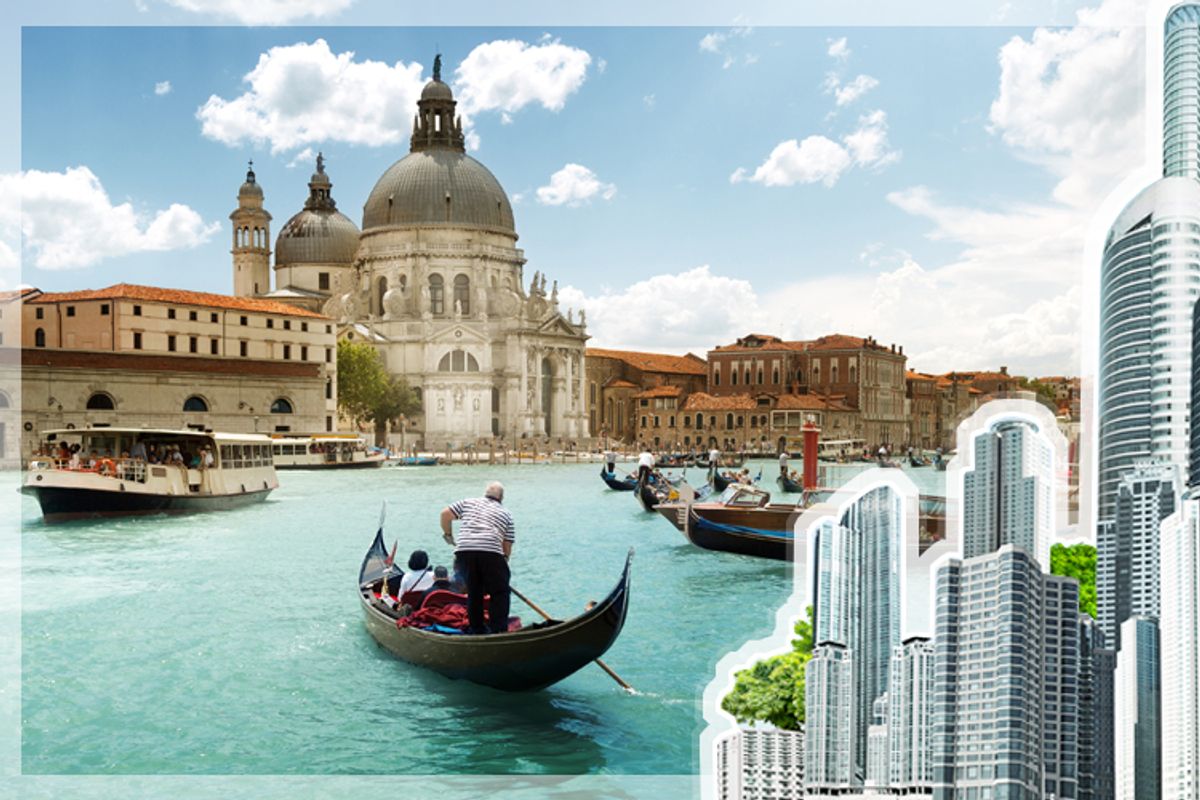 In “Death in Venice,” Thomas Mann’s story of beauty and obsession, something is rotten in the title city. As the sweet smell of disinfectant blows through the Piazza San Marco, Gustav von Aschenbach tries to uncover the truth. His barber will not talk; nor will the hotel manager. A musician is caught off-guard by his questions. The newspapers are mum.

What has befallen Venice, an English moneychanger reveals, is the onset of a cholera epidemic. With knowledge of this concealed affliction, our protagonist marvels at the “unscrupulous game” played by the Venetian authorities:

“The city was not swayed by high-minded motives or regard for international agreements. The authorities were more actuated by fear of being out of pocket, by regard for the new exhibition of paintings just opened in the Public Gardens, or by an apprehension of the large losses the hotels and the shops that catered to foreigners would suffer in case of panic and blockade.”

This turn of events is, among other things, a parable of the tourism industry’s self-destructive appetites. We’re more familiar with this tendency from the careless management of natural wonders and ancient ruins, whose beauty and charm can easily fade beneath an endless parade of footsteps. Authorities rarely impose limits recognizing that tourism, even a walk in the woods, is a kind of consumption.

But what if the attraction is not a park, a church or a museum, but an entire city? The number of tourists in Venice each day (between 60- and 80,000) now surpasses the number of people (approximately 58,000) who call the historic center home. A century after Mann’s visit, tourism has strengthened its hold. Desperate for respite in what they say feels like a city under siege, residents are beginning to support a radical idea: limiting access to the city itself. Like quarantine in reverse.

It’s not just Venice. Europe’s most visited cities all struggle, to some degree, with the impact of tourism — even as they reap its rewards. In heavily trafficked neighborhoods like Paris’ Latin Quarter and Prague’s historic center, the prosaic fixtures of local life have largely been swallowed by touristic commerce. Can a city be both a tourist attraction and a nice place to live?

That’s the debate underway in Barcelona. A new documentary, "Bye Bye Barcelona," shines an unforgiving spotlight on the effects of tourism in the Catalan port, where there are five times as many tourists today as there were in 1990. On the city’s famous thoroughfare, La Rambla, four out of five pedestrians are tourists. The number of hotel beds has increased by 40 percent in five years. Countless illegal “tourist flats” further erode a fixed sense of place, as owners eyeing profitable short-term rentals evict longtime tenants.

As Mann knew, tourism is big business. The tourist industry in Barcelona, now Europe’s fourth-most-visited city after London, Paris and Rome, maintains 100,000 jobs. Related revenue accounts for 12 percent of the GDP of Catalonia. No one thinks it’s a bad thing. But does it have to look like this?

You can feel the filmmakers’ scorn as the camera turns on the pale-skinned hordes, bused in from cruise ships for a 30-minute visit to Gaudí’s Sagrada Família. The loathing is infectious. Nothing makes travel look more senseless and dull than the sight of a dozen people taking the same photograph.

Yet on balance, the film’s interviewees seem hopeful that the city’s tourism industry can evolve away from a concocted “monoculture” — why do so many visitors buy Mexican sombreros? — and toward a more nuanced appreciation of Catalonian culture. Feargus O’Sullivan, writing in the Atlantic Cities, echoes this optimism: "More people are attracted by good food and architecture than by cheap cava and Barça football T-shirts.”

One of the protagonists divides city visitors into three categories: the tourist, the traveler and the voyager -- each open to a greater degree of improvisation than the last. Soon, he hopes, Barcelona’s visitors will shift their sensibilities toward the latter category. Their tastes will come to be as nuanced and varied as those of the locals, and their presence similarly dispersed throughout the city.

This concept is bigger than Barcelona. In the New York Times, David Brooks writes of "an endless supply of middle-class consumers who have boutique identities and aspirations,” citing the rise of smaller, bespoke hotels against the homogeny of the Hilton. Some guidebooks, like the Wallpaper series, skip over monuments entirely for locally popular bars, cafes, shops and galleries. And the existence of sites like Yelp, along with local or expat blogs, allow a traveler to choose a restaurant or concert in London the same way he or she would at home.

The American sociologist Dean MacCannell succinctly outlined this philosophy of travel back in 1976, in "The Tourist: A New Theory of the Leisure Class." Here’s MacCannell’s interpretation of the “right” and “wrong” of tourism:

“Touristic shame is not based on being a tourist but on not being tourist enough, on a failure to see everything the way it 'ought' to be seen. The touristic critique of tourism is based on a desire to go beyond the other ‘mere' tourists to a more profound appreciation of society and culture, and it is by no means limited to intellectual statements. All tourists desire this deeper involvement with society and culture to some degree; it is a basic component of their motivation to travel.”

In Barcelona, it's the difference between buying a sombrero and eating in a restaurant where only Catalan is spoken. For a tourist, MacCannell believes, the city exists on a six-level spectrum between “fronts” designed for visitors and “backs” that show the city at its most authentic. "The term ‘tourist,’” he observed, "is increasingly used as a derisive label for someone who seems content with his obviously inauthentic experience.”

In sum, the narrative is of an entire class of global travelers for whom traveling is the search for true experiences (admittedly a subjective term) more than a simple checklist of famous sites. If such informed travel is the inevitable final form of tourism, it’s only a matter of time before visitors perfect the technique. On a trip to Paris, such travelers will go the Louvre — but skip the wait to Instagram the Mona Lisa. They’ll still have a steak-frites — but they’ll be damned if the menu is in English. You probably know some of these people; you might even be one of them.

But do they represent a significant force in tourism at large? If those people, and their priorities, were truly ascendant, then tourism of the more basic kind would be a poisonous influence. Just as a tobacco crop planted over and over saps the vitality of the soil, so the tourism-industrial complex absorbs the diversity of a city. One day, racks of Yoshi T-shirts and their ilk might actively deter visitors from coming to La Rambla; even the least savvy visitors to Dublin would make like the locals and avoid Temple Bar.

That hasn’t happened. True, the average visitor spends fewer nights in Barcelona than two decades ago. True, too, the percentage of visitors on a second or third trip has dropped. But on the whole, while the number of “authenticity” tourists may be growing, their less discerning counterparts are multiplying even faster. So Venice, long decried as a theme park, grows more popular, year in and year out. That’s why visitors to France don’t go to Lyon or Marseille instead of Paris. That’s why the number of double-decker tourist buses in New York City — the very antithesis of a “boutique experience” — has tripled over the last 10 years. When Barcelona becomes the main docking site for Royal Caribbean’s Allure of the Seas next year, that single ship will bring in over 150,000 new visitors – all on identical, pre-purchased vacation plans.

Authenticity travel may be booming, but it is dwarfed by tourism’s general global expansion. For every traveler who screenshots a city map onto her smartphone to navigate without attracting attention, there are three who follow a man with a red umbrella. For every traveler who avoids a cafe with an English-language menu, there are three who seek it out.

If Barcelonans are hoping tourists’ tastes simply evolve, they will be waiting a long time. On the other hand, the Venetian proposal seems equally misguided. The concept of a “gate fee” to enter the city is sure to repel exactly the kind of tourists Venetians would like to welcome.

If only we had built more cities like these!