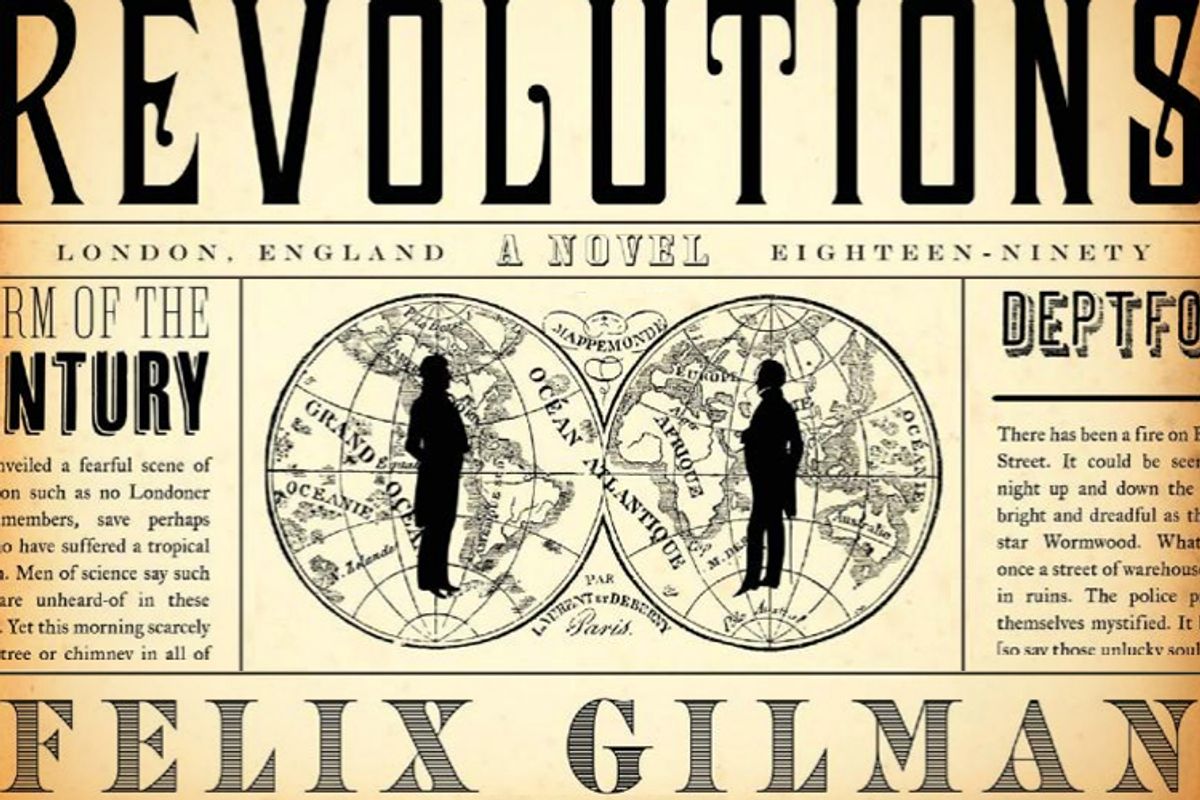 It's 1893 in London and a pair of young lovers -- he a journalist, she a typist-for-hire -- meet during a legendary storm. Since there was no such storm in London in 1893, that's your first sign that Felix Gilman's new novel, "The Revolutions," takes place in an alternative history, although not, it seems for a while, so very different from the history we already know. Arthur Shaw is trying to write a detective story to slake the public's thirst for such tales after Sir Arthur Conan Doyle sent his famous sleuth over the Reichenbach Falls with Professor Moriarty. Josephine Bradman makes her living transcribing minutes and typing up monographs for the various occult societies and hobbyists that multiplied in Britain at the time, from mediums to druids to masters of so-called ancient Egyptian or Tibetan mystical practices.

In the pages of "The Revolutions," real turn-of-the-century organizations like the Society for Psychical Research and the Temple of the Isis-Urania (affiliated with the semi-notorious Order of the Golden Dawn) crop up alongside the entirely fictional Ordo V.V. 341, an esoteric group for which Josephine takes shorthand minutes. This milieu, with its talk of "austral signs" and invocations of everything from the Tarot to Hindu deities, is more than a little ridiculous: "The Ordo V.V. 341," the narrator explains, "though it pretended to a certain immemorial tradition, had in fact been founded not many years ago by the late Mr. Sedgley and a few friends." Historically, it was a world of tidy, mostly bourgeois lives nettled by longing for transcendence, wisdom, power and spooky rituals.

In Gilman's version of 1890s London, however, the occult groups are onto something. A sinister aristocrat named Atwood, upon learning that Arthur is looking for work, sends him to a warehouse down by the docks, where people sit in rooms all day working peculiar calculations that give them nightmares and drive the less strong-minded among them insane. Their employer is building an "Engine," a sort of proto-computer, but the term also recalls Gilman's two previous books, steampunk westerns set in a mythologized version of the American frontier where supernatural forces called the Gun and the Line, standing for anarchy and technocracy, battled for control of the virgin wilderness.

In "The Revolutions," the war is between magicians. Arthur and Josephine are reluctantly drawn into Atwood's clash with Lord Padmore, a newspaper mogul who commands a cadre of editors he temporarily coverts into zombies by making them drink enchanted ink -- an impish nod to Rupert Murdoch and his minions. Atwood, much to his modern, cosmopolitan disgust, is forced to enlist the help of one Mrs. Archer ("an awful old woman. You have no idea how old or how awful"). In one delicious showdown, Archer and Padmore square off in the restaurant at the Savoy Hotel, using their powers to induce the swank patrons to brawl.

Although Gilman's characters never doubt that supernatural forces have been mobilized, part of the mercurial charm of "The Revolutions" is that the reader can't be entirely sure they're right about that. Perhaps Padmore and his cronies caused the great storm of 1893 and the fire that gutted the workshop where the Engine was built, or perhaps those were mere accidents. Maybe Atwood's elite circle of followers can travel as disembodied spirits through the cosmos, or maybe they're just dreaming or hypnotized. And while all of the characters believe that on one of these journeys, Josephine's spirit got stranded on Mars, it sometimes seems that she might just be catatonic.

The novel's earlier chapters of dueling Victorian sorcerers in London give way to a shimmering tribute to the era's "planetary romances," narratives about visionary journeys to other worlds whose societies and customs always contrasted pointedly with our own. (These are the pioneering works -- by such writers as Camille Flammarion and C.S. Lewis -- of what would eventually become science fiction.) The ghostly Josephine haunts a city of mournful, dragonfly-like aliens on one of Mars' moons. They are a people exiled from their home planet in the aftermath of a magical war very much like the one harrowing London. Meanwhile, Atwood and Arthur mount an expedition to follow Josephine to Mars and, if possible, bring her back.

As with his earlier duology ("The Half-Made World" and "The Rise of Ransom City"), Gilman offers the treats of pulp fiction -- dastardly villains, dashing heroines, plenty of Edgar Rice Burroughs-style adventure -- infused with the deeper satisfactions of literature. The novel resists easy and obvious resolution. If "The Half-Made World" was an outsider's meditation on the contradictory impulses united in the American character, "The Revolutions" is about the hubris of civilization; each thinks it will last forever, and each will eventually fall. The magicians of Mars left their planet a toxic ruin, yet it never occurs to the vainglorious Atwood that he might learn a cautionary lesson from their example. Arthur C. Clarke famously observed that "any sufficiently advanced technology is indistinguishable from magic," but as Gilman tells it, the saying also works the other way around.