Donald Trump: Donald Sterling was "set up" by his "very, very bad" "girlfriend from hell"

“She was baiting him and she’s a terrible human being,” Trump said 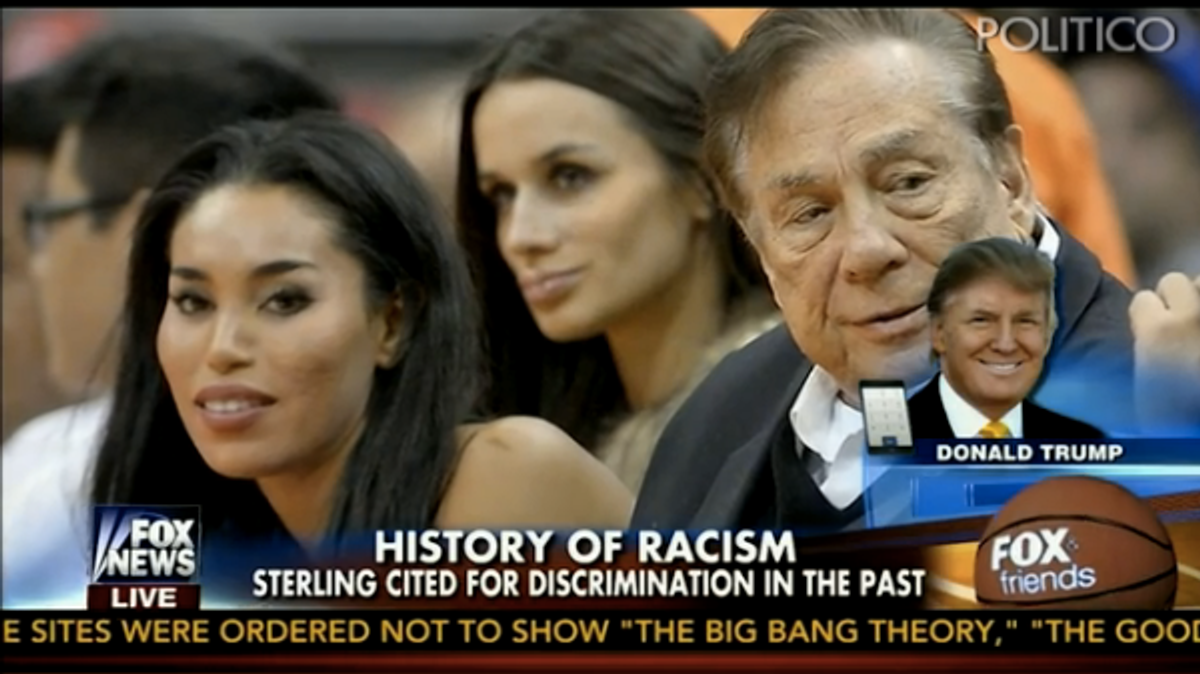 Sterling, a super-rich real estate developer who owns the Los Angeles Clippers, was caught on tape making vile racist comments about black people -- including telling his then-girlfriend, V. Stiviano, not to bring black friends to Clippers games, defending racism as "the culture" while saying he didn't care to change it, and threatening to get a new "girl" if Stiviano continued to challenge his racism.

On "Fox & Friends" Monday morning, Trump said that Sterling had been "set up" by Stiviano, whom he called a girlfriend "from hell."

“He got set up by a very, very bad girlfriend, let’s face it,” Trump said. “She’s called the ‘girlfriend from hell.’" You can hear the sounds of agreement coming from the hosts while Trump spouts this nonsense.

“She was baiting him and she’s a terrible human being,” he continued. “The way she led him along, I mean -- he should know if he were there, if he was with it, he would know after one or two of those questions that she was asking that there’s something going on here. You look at the way he’s being baited, just constantly being baited. I read part of the transcript and it was ridiculous. You sort of pick that up very quickly.”

The recorded conversation came about after Sterling requested that Stiviano delete images of her black friends from her Instagram account, which is an incredibly racist thing. Sterling also has a long legal history of discriminating against tenants of color in Los Angeles. There was nothing "set up" about Sterling's racism. But Trump is always completely wrong about everything and is himself terrible, so there's nothing surprising about his failure to grasp even the basic realities of the exchange.

But something did strike me here -- though, again, didn't surprise me since it's Trump we're talking about: Trump calls Stiviano "a terrible human being" -- for choosing to "set up" Sterling. But his comment on Sterling are only targeted at what he said -- not Sterling himself.

Sterling said something "despicable," according to Trump. But Stiviano is "a terrible human being."

The mind boggles. The misogyny and racism here is just overwhelming.

Trump, by the way, is a regular Monday morning guest of the show.