NBA's Adam Silver brought a tone of moral outrage. Now owners should reckon with something else: The other victims 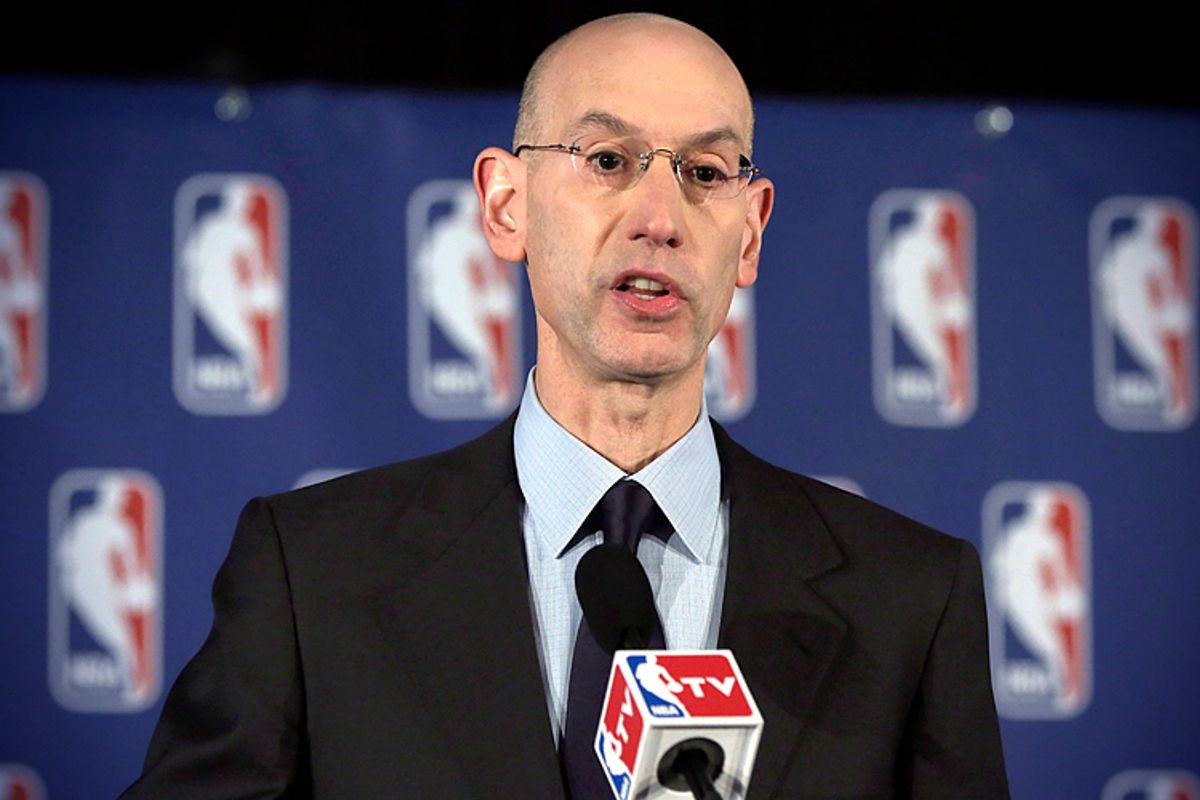 Adam Silver reads a statement during a news conference, in New York, April 29, 2014, announcing that he is banning Los Angeles Clipper owner Donald Sterling for life from the Clippers organization. (AP/Richard Drew)
--

In the end it likely came down to money, not morality. Donald Sterling’s racism had already cost the Los Angeles Clippers a dozen sponsors, Coach Doc Rivers had already made it known he would not return to the team next year, and more trouble was coming. But NBA commissioner Adam Silver brought a tone of moral outrage in delivering the toughest judgment possible against Sterling Tuesday afternoon: banning him for life from any involvement with the team and the NBA, fining him the maximum $2.5 million and urging NBA owners (the only ones with the power) to force a sale. "I fully expect to get the support I need to from other owners to remove him," Silver declared.

It was a satisfying moment: Rarely do we see racists get such a quick comeuppance. Silver seemed genuinely, personally aggrieved by Sterling’s disgusting comments about African-Americans in a league that runs on black labor, talent and fandom. He praised great black NBA pioneers including Earl Lloyd, Chuck Cooper, Sweetwater Clifton and “the great Bill Russell.” His quick, tough action earned him praise from NBA Players Association advisor Kevin Johnson, also the mayor of Sacramento. “Today the players believe the commissioner has done his duty,” Johnson declared in a press conference following Silver’s announcement. “He is not just the owners’ commissioner, he is also the players’ commissioner.”

Still, Silver’s tough sanctions against Sterling can’t erase the fact that the NBA did nothing about earlier allegations of Sterling’s racism and ignored his ugly off the court behavior as a slumlord repeatedly charged with discriminating against black and Latino tenants. In fact, the bold move almost served to underscore how long the league had looked away from the festering sore that was Donald Sterling. Taking questions after his announcement, Silver said, “I can’t speak to past actions. When we had evidence, we acted on it.” He added that he only considered Sterling’s recently recorded racism in deciding on his lifetime ban, but said the owners would consider the entire record when deciding whether to force him to sell the team.

It’s easy to get distracted by the seamy sexual side-story of the Sterling case – we hear him tell mistress V. Stiviano he doesn’t care if she sleeps with black men, as long as she’s never seen with them in public, or on Instagram. (Even Magic Johnson isn’t good enough.) But Silver’s punishment is a rebuke to Sterling’s racist paternalism toward the players who support his vast fortune. He tells Stiviano: “I support them and give them food, and clothes, and cars, and houses,” he declared. “Who gives it to them? Does someone else give it to them? Do I know that I have—Who makes the game? Do I make the game, or do they make the game? Is there 30 owners, that created the league?”

Silver’s decision makes clear that the players make the game, too. That’s why it was greeted with such jubilation by current and former NBA stars.

I don’t want to nitpick Silver’s bold move, but he did say something I think should be corrected. Asked about why the NBA ignored earlier allegations of racism, he said he knew Sterling had faced two lawsuits, one from former manager Elgin Baylor charging race and age discrimination, and one by the Justice Department charging racial discrimination in housing. Baylor lost his suit, and the Justice Department settled with Sterling without his making an admission of guilt, leaving the NBA without clear evidence of Sterling’s wrongdoing, Silver said.

But as long as the NBA owners are considering the full record when deciding whether to make Sterling sell his team, they ought to be aware of an earlier lawsuit. Sterling was sued by the Housing Rights Center of Los Angeles, and in 2005 he settled, for what the judge called “one of the largest ever obtained in this type of case.” The full settlement was sealed, but the plaintiffs won $4.9 million in legal fees alone.

The court documents make tough reading. One of Sterling’s property managers testified about an elderly tenant, Kandynce Jones, paralyzed and legally blind. When Jones’ run-down apartment was flooded, she asked for repairs and reimbursement for damages. "Is she one of those black people that stink?" Sterling replied. “Just evict the bitch." There were no repairs; Jones lived without a shower or a flushing toilet, and she died of a stroke before the Housing Rights Center won its lawsuit. Sterling told another property manager that he knew discrimination was wrong, but because he was the owner, it was his right.

Adam Silver is telling Sterling he’s wrong about that. In his press conference, he apologized to Magic Johnson personally. It would be nice if the NBA belatedly acknowledged the wrong done to Kandynce Jones and all of the other black and Latino tenants Sterling abused while a proud and respected member of the NBA owners club.