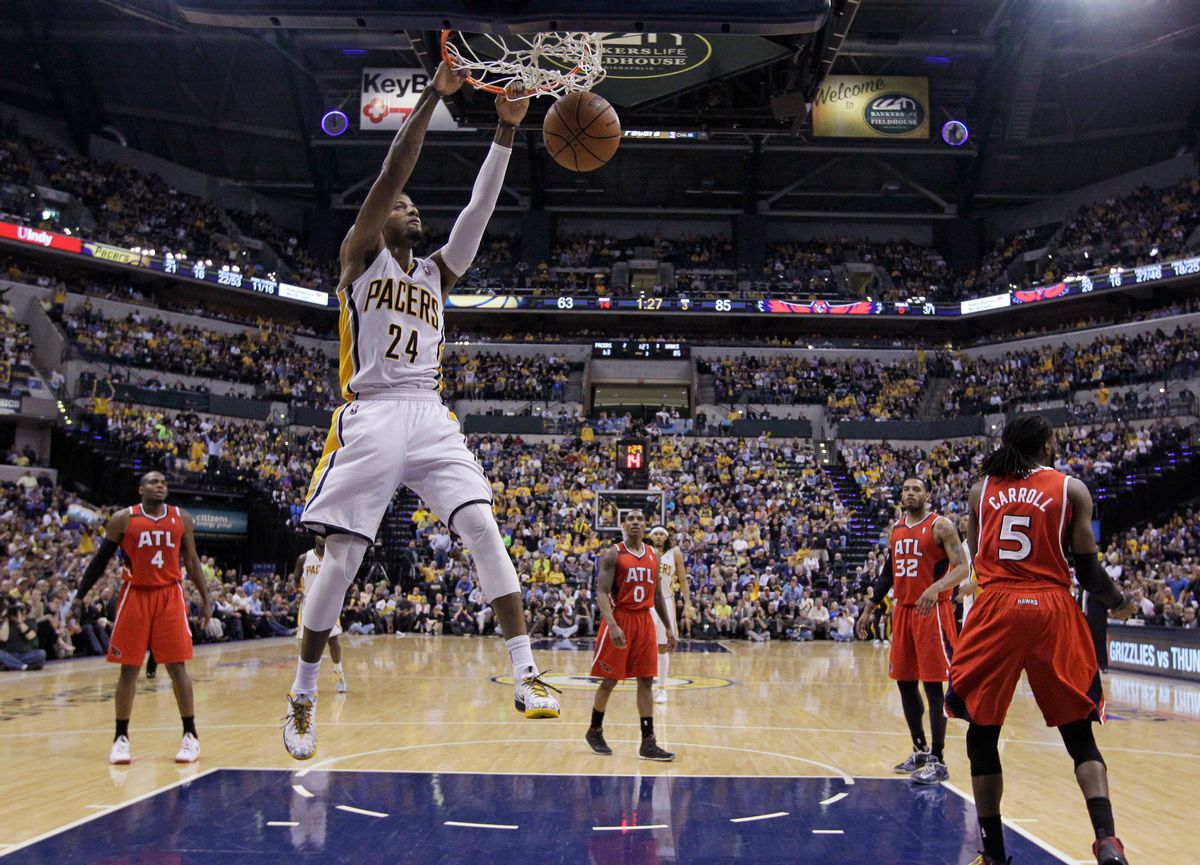 INDIANAPOLIS (AP) — Mike Scott rediscovered his shooting touch when Atlanta needed it most.

His teammates took the cue, and now the Hawks are on the brink of completing one of the most unexpected playoff upsets in NBA history.

Scott made five 3-pointers in a 17-point second quarter and the Hawks' defense fended off a frantic fourth-quarter charge to hold off top-seeded Indiana 107-97 for a 3-2 lead in the best-of-seven series.

"It was really just the regular game plan, the regular pick-and-roll, pick-and-pop game," Scott said. "They sagged off, they were worried about (Shelvin) Mack and when he drew two defenders, I was wide open."

Scott's performance was like a bolt out of the blue.

After scoring just 30 points in the first four games, he knocked down four straight 3s early in the second quarter and then closed the decisive 30-6 run with the last of his five 3s to give the eighth-seeded Hawks a commanding 48-27 lead. They can clinch the series Thursday night in Atlanta.

It's a shocking twist in the East, a conference that most expected to come down to an epic Pacers-Heat rematch in the conference finals. To have any chance now, the Pacers need to win two straight, something they haven't done with their regular starters since mid-March.

The Hawks, meanwhile, continued to decimate the Pacers' defense with the spread offense, especially in a record-breaking second quarter.

Scott's 3-point barrage helped Atlanta tie an NBA record with nine 3s in the quarter, becoming the first playoff team to achieve that feat since 2008. They finished with a franchise postseason record 15, three more than their previous mark.

And as the Hawks outscored Indiana 41-19 over that 12-minute span, the Hawks matched their second-highest second-quarter point total in postseason history. They scored 41 against Detroit on April 17, 1986, and had 45 against Fort Wayne on March 14, 1957, when the team was based in St. Louis.

The 41 points allowed by Indiana also was a franchise playoff record, breaking the previous mark of 39 at Boston on April 23, 2005.

And Atlanta joined the 1970 Milwaukee Bucks as the only road teams in the shot-clock era to score 40 points in a quarter and allow fewer than 20.

"This gives us a lot of confidence," Shelvin Mack said after leading the Hawks with 20 points. "But in this series the home team has lost the majority of the games. They're a great team. They're going to come out and play really hard, their season is on the line. We have to be prepared to come out and compete at a high level."

For the Pacers, it was yet another problematic game in their second-half collapse.

Roy Hibbert failed to score a point or grab a rebound for the first time in his playoff career. The bench Larry Bird rebuilt to contend with Miami was outscored 45-23. Atlanta even outrebounded the bigger, stronger Pacers 38-35.

Paul George led the Pacers with 26 points and 12 rebounds — his fifth straight double-double in the series — but became the first player in league history to finish a playoff game with at least 25 points, 10 rebounds, five assists and five steals in a losing effort. Three other players — George Hill, Lance Stephenson and David West — each had 16 points.

It still wasn't enough, and now the Pacers are on the brink of elimination.

They had lots of motivation Monday, too, and still failed to take control of the series.

Scott and his teammates wouldn't allow it, quickly swinging the pivotal fifth game in their favor.

Atlanta opened the second quarter with a free throw from Mack to tie the score at 21. Scott then made four consecutive 3s to push the lead to 33-21. Mack followed that with a midrange jumper, Kyle Korver made a 3, Scott scored on a putback and Korver hit his second 3. Mack followed that with two free throws and Scott closed the run with his last 3 of the game to make it 48-27.

The Pacers still trailed 61-40 at halftime and by as many as 30 points in the third quarter before the frantic comeback.

But Korver answered with a 3 and the Hawks closed it out at the free throw line.

"We can play with this team," Scott said. "They're a great team, especially at home, great players, great coach, but we have a belief in ourselves as well."

NOTES: The Pacers had a moment of silence to honor former coach Jack Ramsay, who died Monday at age 89. Ramsay led the Pacers to the first NBA playoff win in franchise history. ... Atlanta has three wins at Bankers Life Fieldhouse and is the only team to beat Indiana on its home court more than once this season. ... The Pacers are 0-10 in series when trailing 3-2.