This dark, supernatural thriller puts a new spin on an old monster story 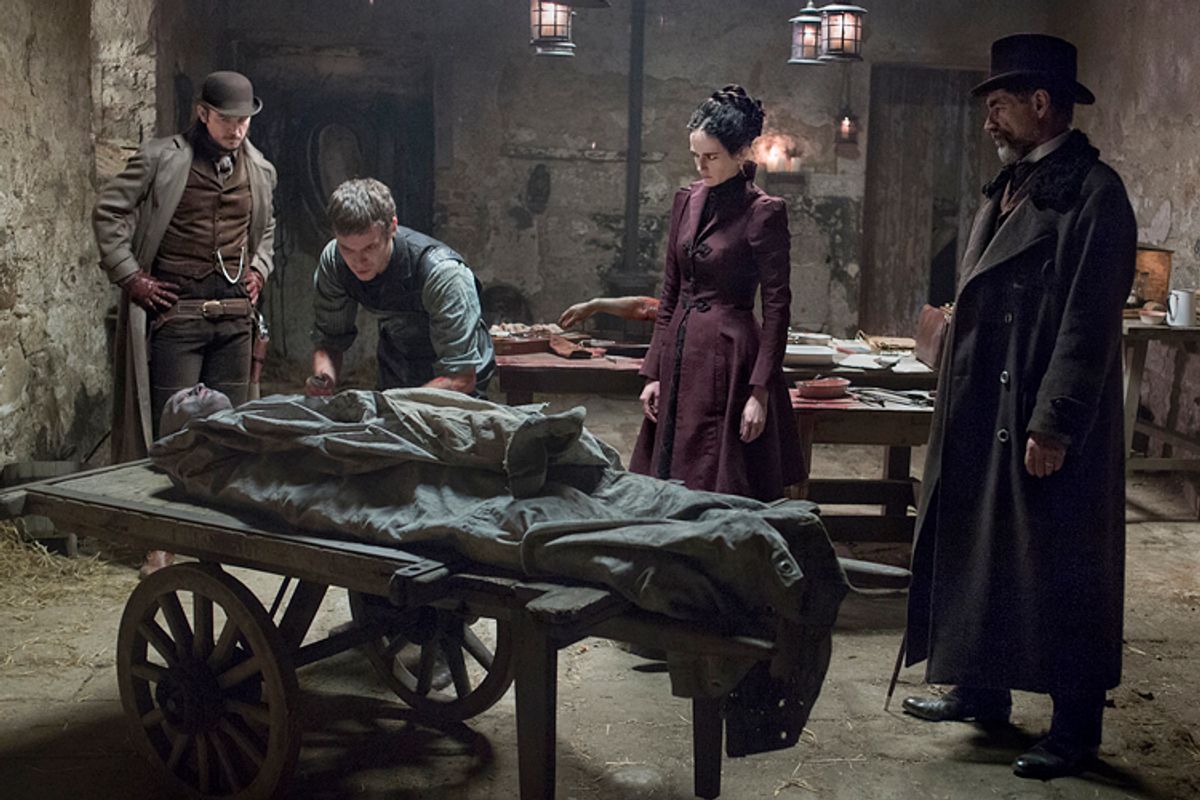 Showtime’s new series boasts mysterious abductions, mass mutilations and fanged, flesh-eating, exoskeletal Egyptians. But possibly the most shocking thing about “Penny Dreadful” is that it reimagines perhaps the world’s most renowned monster creation tale as a budding, homoerotically charged bond between a lonely, intense young genius and the doe-eyed corpse resurrected in his basement. This twist, revealed dramatically in the final scenes of the first episode, feels more like part of an agenda than an element integral to the show’s immediate creature-hunt narrative. But Showtime has, as of yesterday, only released a single episode to the public via online sources – press got two; the show premieres on the network May 11. So, it remains to be seen how this newfangled Frankenstein fits into the story of 19th century sort-of-vampire hunters.

We’re putting a team together … OK, that’s not actually how it starts, but it might as well be. When Ethan Chandler, a carnie gunslinger with a drinking problem, breezes haughtily into London in 1891, he and his considerable pistol skills are quickly enlisted by Eva Green’s eyes in the head of one Vanessa Ives for an undisclosed but clearly dangerous mission. Turns out, Ives is recruiting on behalf of Sir Malcolm Murray (Timothy Dalton) a ruggedly handsome Dr. Livingstone type complete with a dark-skinned butler named Sembene presumably hailing from elsewhere in the Empire. Together, Chandler, Ives and Sir Malcolm venture deep into the tunnels below an opium den to find a cache of mangled, partially devoured humanity. The trio barely escapes a vampire attack before Malcolm puts a rapier through the ringleader’s chest, killing it. Unfortunately, this was not the vampire they were looking for, as Malcolm later informs Chandler.

Enter Dr. Victor Frankenstein (Harry Treadaway). Sir Malcolm and Ives solicit the young, exceedingly grim scientist to do a quickie autopsy on the dead bloodsucker, prompting Chandler, an American, to utter this seemingly anachronistic phrase: “Who the fuck are you people?” Sir Malcolm begs Chandler to come by his office in the morning for a tarot reading and an explanation. Malcolm and Ives, their relationship still unclear, have been searching the so-called demimonde for Malcolm’s daughter who was taken long ago by a creature such as the one lying open on Frankenstein’s operating table. Chandler turns down Malcolm’s offer to join their quest – let’s assume, temporarily. Frankenstein, desperately in need of Malcolm’s money to fund his research, does not.

In the final minutes of the premiere, we see what Victor Frankenstein’s experiments with electricity and biology have wrought – and the moment is admirably underplayed. There’s no manic physician yelling, “It’s alive!” over a chorus of thunderbolts here. What we get is an almost too tender exchange between Victor and his “creature,” a trembling, bloodshot Rory Kinnear looking more like a heavily scarred cancer patient than any sort of monster. It is obvious that, from here on, “Penny Dreadful” will be wearing its resurrected heart on its sleeve regarding these two, and the audience will be asked to accept some initially odd interactions if not redefine its notion of sexuality to include – well – semi-necrophilia. (Spoiler alert: Episode 2 offers the undead equivalent of the spaghetti-eating scene from “Lady and the Tramp.”)

Still, despite particular moments of heavy melodrama, “Penny Dreadful” is thankfully less campy than “True Blood” and even “American Horror Story.” Wisely, the most compelling actor was chosen to play Victor Frankenstein, making his obsessive and morbid geekiness a joy to watch. The cast is a sizable one; in addition to hundreds of extras and bit players in elaborate Victorian garb, actors Billie Piper and Reeve Carney as Dorian Gray have yet to be introduced.

Befitting the largish cast, the most impressive thing about “Penny Dreadful” so far is its sense of scale. The show’s sprawling Victorian London not only rivals similarly fabricated worlds of “Boardwalk Empire” and “Game of Thrones,” but also takes on an appropriately mystical quality. The name “Penny Dreadful” is a reference to the fantastical storybooks that were popular at the time, detailing the adventures of monsters and crime fighters. From the back alleys of London, to a subterranean vampire lair, to Sir Malcolm’s cavernous library, the locations seem ripped from the pages of a cheap novel, but greatly and convincingly expanded. With all this world-building, Victor Frankenstein is not alone in playing God.

(The premiere episode of “Penny Dreadful” is currently available on YouTube as well as other Showtime digital delivery platforms.)