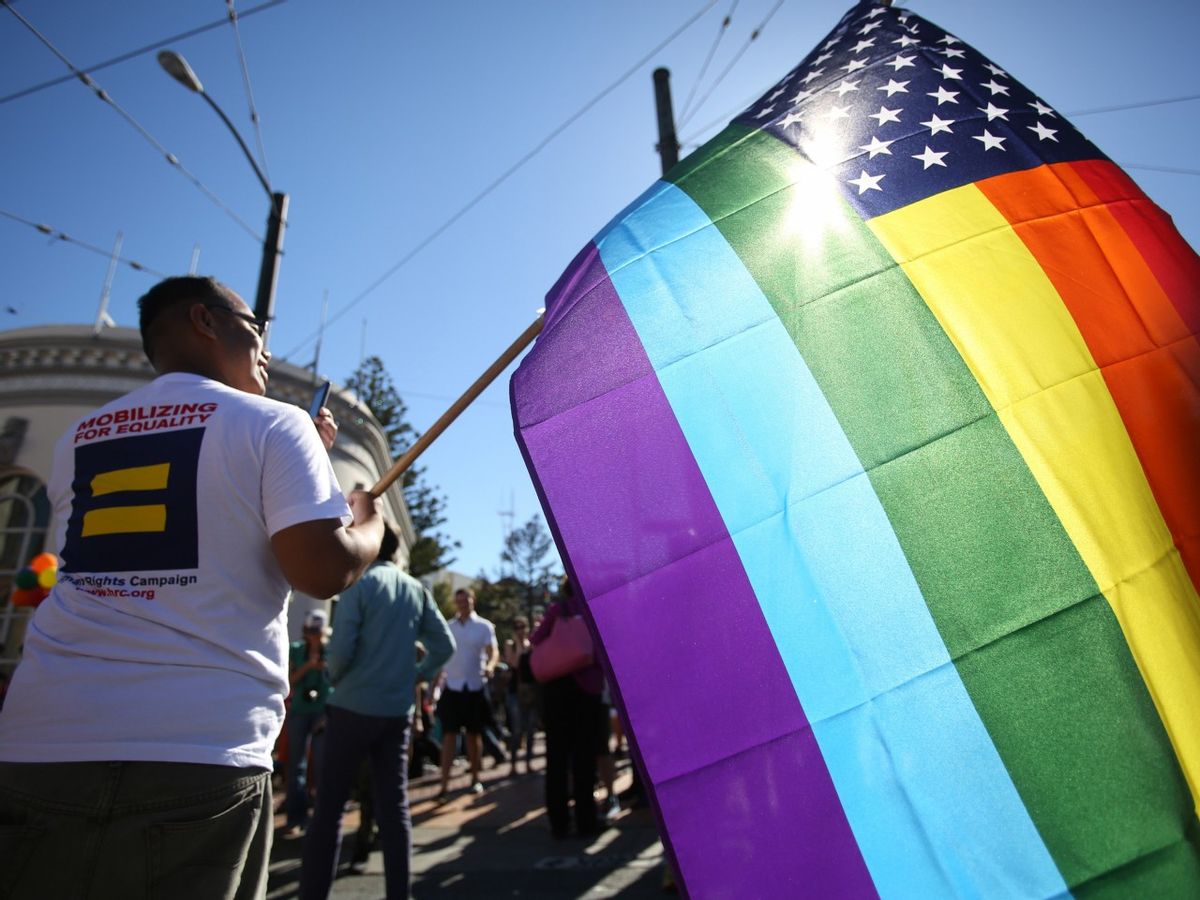 Back in 2009 a group of Christian leaders from across the land banded together and issued a manifesto called the Manhattan Declaration. It was organized by former Nixon White House aide and convicted felon Charles Colson, and declared those signed to be unalterably opposed to same-sex marriage and abortion rights, along with a few ancillary issues in the same realm. There's nothing surprising about that, of course. Social conservatism has been the organizing principle of the Christian right for many decades. But this time they had a different rationale than the stale old moral arguments: religious liberty.

That may also sound like old news. After all, religious freedom is enshrined in our Constitution, right there in the First Amendment. But now the religious right is using this concept to argue that the state cannot require people of faith to follow laws they assert are contrary to their religious beliefs. That's not been a commonly held legal viewpoint up until now.

They did not make this goal explicit in their declaration. In fact, they framed the issue as a defensive one in which conservative Christians must take this position due to the constant encroachments on their freedoms by the secular state. They wrote:

In recent decades a growing body of case law has paralleled the decline in respect for religious values in the media, the academy and political leadership, resulting in restrictions on the free exercise of religion. We view this as an ominous development, not only because of its threat to the individual liberty guaranteed to every person, regardless of his or her faith, but because the trend also threatens the common welfare and the culture of freedom on which our system of republican government is founded.

Restrictions on the freedom of conscience or the ability to hire people of one's own faith or conscientious moral convictions for religious institutions, for example, undermines the viability of the intermediate structures of society, the essential buffer against the overweening authority of the state, resulting in the soft despotism Tocqueville so prophetically warned of. Disintegration of civil society is a prelude to tyranny.

Essentially, they are saying here that laws requiring people not to discriminate on the basis of religion constitute an encroachment of their religious freedom to discriminate. And conservatives in states throughout the nation have been using this legal doctrine to push the envelope beyond anything we've seen before. (It hasn't always been successful, but the idea is becoming mainstream.)

This is the essence of the rest of their claim:

Because we honor justice and the common good, we will not comply with any edict that purports to compel our institutions to participate in abortions, embryo-destructive research, assisted suicide and euthanasia, or any other anti-life act; nor will we bend to any rule purporting to force us to bless immoral sexual partnerships, treat them as marriages or the equivalent, or refrain from proclaiming the truth, as we know it, about morality and immorality and marriage and the family. We will fully and ungrudgingly render to Caesar what is Caesar's. But under no circumstances will we render to Caesar what is God's.

So, they will not be involved in "anti-life" acts (although you'll note there is no mention of the death penalty) and they will not bless sexual relationships they find immoral. And gosh darn it nobody's going to tell them to shut up about it. And you know what? In all of that they have no greater friends than liberals, and particularly liberal Christians, who also believe that nobody should be forced to have an abortion or be involved in euthanasia or perform gay marriage ceremonies --- or use birth control, for that matter. They believe that each person answers to his or her own individual conscience and religious values and the state has no power to mandate otherwise.

But that's not what religious conservatives really want, is it? It's not enough that their religion proscribes their participation in these "anti-life acts" and doesn't allow them to bless gay marriage. Their religion tells them the rest of us, who may have different religious values and philosophical beliefs about these issues, are not allowed to participate in them. Evidently, religious liberty is a one way street -- or, more accurately, their way or the highway.

There have been those who said, well, if you think religious liberty is so great, then surely you won't mind if we put up a Hindu shrine in the courthouse or say a Wiccan prayer at the high school graduation. The ACLU commonly files lawsuits on their behalf. And yes, that does cause some discomfort for these religious conservatives. All we have to do is recall the explosion of anger at the prospect of a Muslim center near the World Trade Center to see the "religious liberty" argument get cast aside without a second thought. But it's still a bit abstract and the cultural and ethnic divide allows them to couch their arguments in different ways that confuse the issue for most people.

This, on the other hand, is going to force them to confront their own argument head on:

In a novel legal attack on a state’s same-sex marriage ban, a liberal Protestant denomination on Monday filed a lawsuit arguing that North Carolina is unconstitutionally restricting religious freedom by barring clergy members from blessing gay and lesbian couples.

The denomination argues that a North Carolina law criminalizing the religious solemnization of weddings without a state-issued marriage license violates the First Amendment. Mr. Clark said that North Carolina allows clergy members to bless same-sex couples married in other states, but otherwise bars them from performing “religious blessings and marriage rites” for same-sex couples, and that “if they perform a religious blessing ceremony of a same-sex couple in their church, they are subject to prosecution and civil judgments.”

You mean to say that Christian clergy who support gay marriage believe they have a right to exercise their religious freedom too? Well now, that's a conundrum, isn't it? After all, nobody has ever said that conservative Christians should be compelled to go against their beliefs and legally marry gay couples. But these laws are very definitely telling these liberal Christians that they cannot. Indeed, in North Carolina they criminalized it, holding clergy legally liable for performing the ceremonies.

Surprisingly, the North Carolina Values Coalition did not step up to defend the religious freedom of these Christian Clergy. Quite the opposite, in fact. They attacked their religious belief:

It’s both ironic and sad that an entire religious denomination and its clergy who purport holding to Christian teachings on marriage would look to the courts to justify their errant beliefs. These individuals are simply revisionists that distort the teaching of Scripture to justify sexual revolution, not marital sanctity.

"Errant beliefs," "revisionists" "distort the teaching of the Scriptures." Does that sound like freedom of religion? In fact, it sounds like the description of 500 years of bloody European history that led a bunch of "revisionists" with "errant beliefs" to get on ships and come to another continent so they could have some of that religious liberty. They eventually wrote a constitution that quite sensibly enshrined the notion that religion would operate in its own sphere free from state interference -- and vice versa. It was a good idea then and it's a good idea now. Putting "Caesar" in the middle of these disagreements doesn't end well.

It will be quite interesting to see how the signers of the Manhattan Declaration and other members of the religious liberty movement react. If they have any integrity and intellectual consistency they will defend their liberal Christian brethren. So far? Crickets.