Toyota moving US base from California to Texas 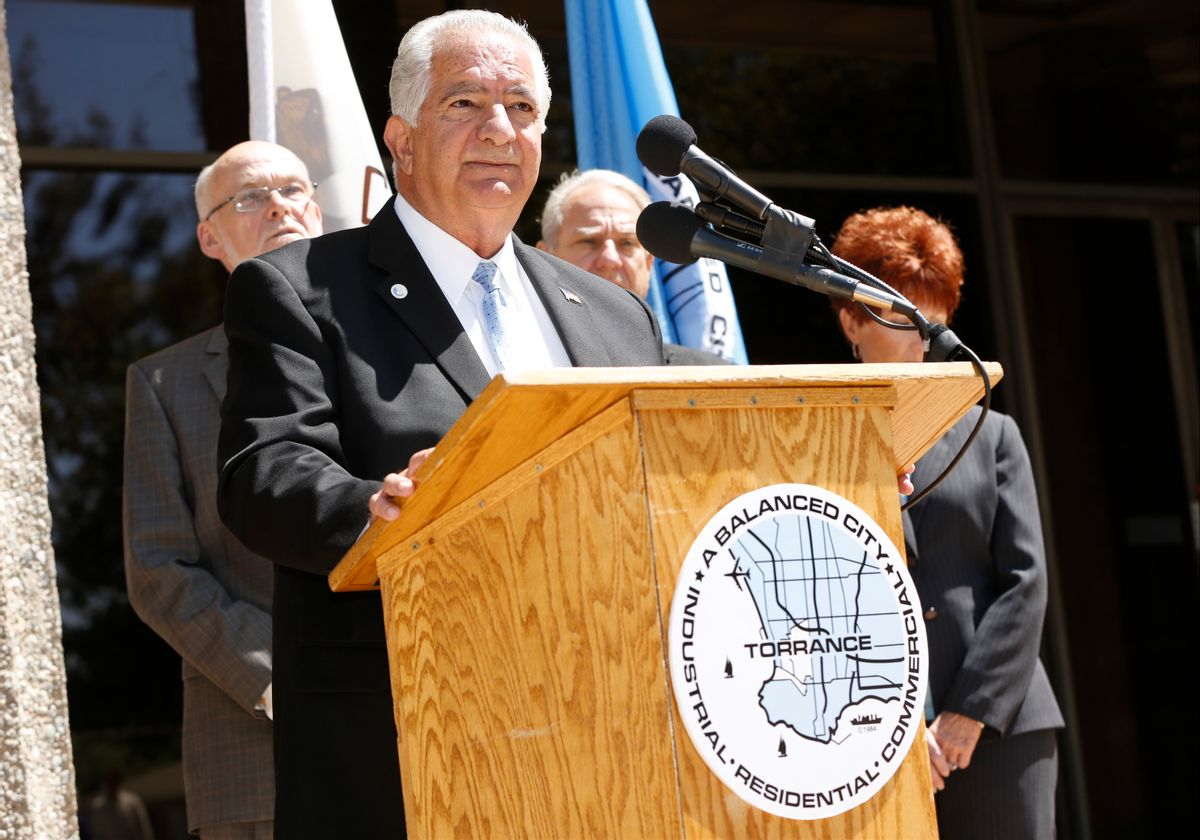 Torrance Mayor Frank Scotto, at podium, holds a news conference to discuss the announced relocation of Toyota Motor Sales' U.S. headquarters, Monday, April 28, 2014, in front of City Hall in Torrance, Calif. Toyota said that it will move its U.S. headquarters from Torrance to Plano, Texas, a suburb of Dallas. Small groups of employees will start moving to temporary office space there this year, but most will not move until late 2016 or early 2017 when a new headquarters is completed. (AP Photo/Damian Dovarganes) (AP)
--

TORRANCE, Calif. (AP) — Toyota delivered a surprise pink slip to California on Monday, announcing the company would move its U.S. headquarters and about 3,000 jobs from the Los Angeles suburbs to the outskirts of Dallas.

The world's largest automaker will keep a foothold in the Golden State — about 2,300 jobs will remain in California after the company settles into its new corporate campus in Plano, Texas. But the announcement is an economic and symbolic slap for California, a historic center of American car culture that has been trying to shake its reputation as a frustrating place to run a business, whether that involves shooting a film or selling a Prius.

"When you look at the whole package, it's difficult to be a business here," lamented Torrance Mayor Frank Scotto, whose community on the edge of the Pacific will suffer as the jobs migrate to Texas.

"If all these great, high-end jobs are leaving California, then we are going to turn into a place that's a retirement community" with low-paying service-sector jobs, Scotto said. "We can't have that," he added, warning that unless the state has a change of attitude, "it's going to be way too late."

Toyota's announcement comes about two months after Occidental Petroleum Corp. disclosed it was moving its headquarters to Houston from Los Angeles. Texas Gov. Rick Perry has been on a publicity campaign to promote his state as a haven for businesses seeking lower taxes and eased government regulation, but Toyota didn't mention what, if any, role Perry played in the company's decision.

Perry, who made two visits to California to lure employers to his state, said Texas offered Toyota $40 million in incentives from the taxpayer-funded Texas Enterprise Fund. The Republican governor said Toyota is expected to invest $300 million in the new headquarters.

Republicans in California quickly blamed Sacramento for the loss, where Democrats control both chambers of the Legislature and every statewide office. A statement issued by Gov. Jerry Brown's Office of Business and Economic Development did not mention Toyota but stressed the state's steadied balance sheet and jobs recovered after the devastating recession.

"Ford, Volkswagen and Nissan continue to invest in California, and the Golden State remains the center of new electric, zero-emission and self-driving vehicle manufacturing and technology," the statement said.

Toyota will break ground this year on its new environmentally friendly headquarters in Plano, about 25 miles north of Dallas. Small groups of employees will start moving to temporary office space there this year, but most won't move until late 2016 or early 2017 when the new headquarters is completed.

The new campus will bring together about 4,000 employees from sales, marketing, engineering, manufacturing and finance.

Toyota also plans to expand its technical center near Ann Arbor, Mich., and move about 250 parts procurement positions there from Georgetown, Ky., where the Camry and Avalon sedans are made. That will free up space for approximately 300 production engineers to move from Erlanger, Ky., to Georgetown. Toyota will have 8,200 employees in Kentucky after the moves are complete.

Jim Lentz, Toyota's CEO for North America, said the new headquarters will enable faster decision making. Lentz told The Associated Press that the move is one of the most significant changes in Toyota's 57-year history in the U.S.

"We needed to be much more collaborative," he said.

Lentz said any employee who wants to move will be given a relocation package and retention bonus. The company is also offering to send employees and their spouses or partners to the new locations to look for new homes.

"Everything we are doing is encouraging people to go," he said.

Plano Mayor Harry LaRosilliere said Toyota's announcement was the result of an intense, three-month courtship but the company's decision was "years in the making."

Plano economic development director Sally Bane said when Toyota decided to hone in on Texas, the city jumpstarted its own campaign, hiring a private consultant who worked with Toyota to help close the deal.

Toyota will join Cigna Corp., Hewlett-Packard Co. and Pepsico Inc.'s Frito Lay in a city with an unemployment rate lower than the state average. Plano's 265,000 residents have a median income of $81,000, one of the highest in the country.

Toyota Motor Corp. has had a presence in California since 1957, when it opened its first U.S. headquarters in a former Rambler dealership in Hollywood. The following year — Toyota's first in the U.S. market — it sold 287 Toyopet Crown sedans and one Land Cruiser.

By 1975, Toyota had become the top import brand in the U.S. It opened its current U.S. headquarters in Torrance in 1982. Toyota sold 2.2 million cars and trucks in the U.S. last year.

The company also maintains offices in New York and Washington. Plants in Mississippi, Texas and Indiana aren't affected by the moves.

Lentz, who became Toyota's first CEO for the North America region in 2013, said Toyota President Akio Toyoda encouraged him to think of ways to make North America more self-reliant. Lentz said he began working on the idea of a combined headquarters last April or May.

Lentz said the company ultimately came up with a list of 100 possibilities that it whittled down to four.

"As we visited those four primary locations, it became quite clear that the Dallas metro area was far and above the best choice," Lentz said. He wouldn't disclose the other three finalists.