Yes, the new cast is very male. But we've forgotten just how screwy the gender politics were in the original movie 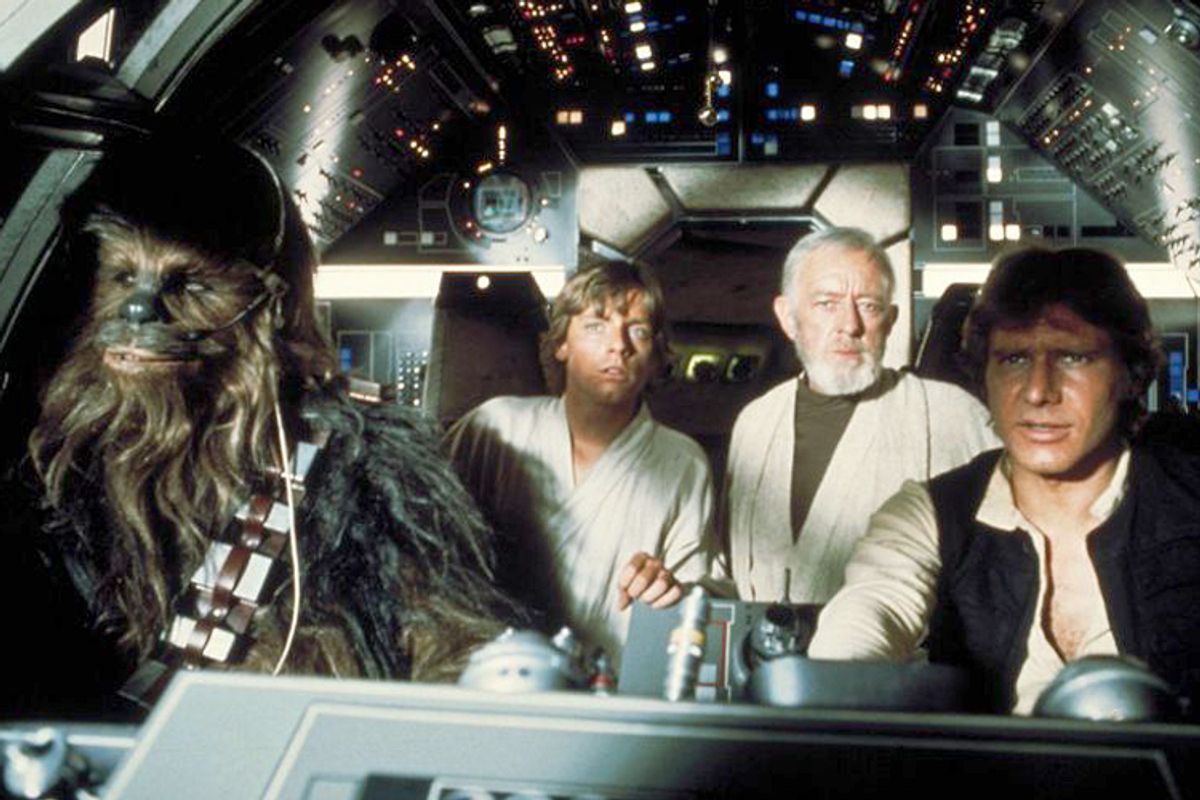 Guess we can't be sure about Chewbacca
--

The new cast for the forthcoming “Star Wars” sequels has been announced and, as many commenters have pointed out, it doesn’t seem to include many women. Of the seven new cast members, only one (Daisy Ridley) is female. Carrie Fisher (Princess Leia in the first films) is supposed to return along with five other original stars, for a total of 11 guys and two ladies. The future, it turns out, is not especially gender diverse.

This is not exactly surprising. Rewatching the original "Star Wars" film, in fact, a male-female ratio of 11-to-2 starts to look positively progressive. Everybody knows that Princess Leia was the only main female character in “Star Wars IV: A New Hope.” But it’s startling to realize just how isolated she was in the first film, released nearly four decades ago. In fact, as you watch, it makes (somewhat) more sense that Luke Skywalker (Mark Hamill) ended up lusting after his sister. She was, apparently, the only woman in the entire universe.

That’s not even much of an exaggeration. In the first film, all the rebel soldiers and all the Imperial storm troopers are men: a military decision that makes little sense, especially for the rebels, who presumably need every able-bodied person they can get in their hopeless struggle against the overwhelming might of the Empire. The bureaucracy of the Empire appears to be entirely male as well; All of the Death Star administrative brass are guys (and white guys at that). Rebel commanders are all men too; the rebel pilots who fly against the Death Star, the rebel strategists who stand around a big official-looking computer table to watch the battle; rebel clerical folks scurrying around in the background — all guys.

Outside the military setting, the story is the same. When Luke and company go to the city of Mos Eiseley, a “wretched hive of scum and villainy,” the scum and the villains are all scummy, villainous men. It’s true that in some cases gender isn’t especially determinate; you don’t know for sure what gender the Jawas are, for example, and robots presumably don’t have genders. But in virtually every case where gender is indicated (via C-3PO’s voice, or the fact that the Sandmen are called “Sandmen”), the indicated gender is male. Besides Leia, the only human woman portrayed in the entire film is the blink-and-you’ll-miss-it role of Luke’s Aunt Beru (Shelagh Fraser).

Even the fact that you can look from star system to star system without ever seeing a woman rather understates the extent to which the first “Star Wars” film is oriented toward men. What female roles that are presented are remarkably stereotypical, even by the low standards of Hollywood. Aunt Beru, for example, is a default mother figure, bustling domestically and mollifying Uncle Owen’s sterner dictats. She might as well have wandered out of a ’50s sitcom.

Though Princess Leia gets to be spunky and fierce and shoot a blaster, the fact remains that her role in the film is both limited and familiar. She’s a princess in need of rescuing, and she gets only a handful of lines until well into the second half of the movie. In the first half, she exists mostly as an inspirational image for the men — literally, as Luke falls in love/lust with the projected ghostly film-loop stored in R2-D2’s memory banks.

When Leia is finally rescued, she gets to be feisty, irascible and appealing — not least because Carrie Fisher is a significantly better actor than whiny Mark Hamill or charismatic-but-still-not-quite-ready-for-prime-time Harrison Ford. Still, her relative competence can’t quite conceal the fact that the script sees her in insistently gendered terms. When someone needs to fire the guns in the “Millennium Falcon,” Han automatically assumes it will be Luke rather than Leia, though there’s no reason to think that he’d be better at it than she would. Similarly, in the final battle with the Death Star, Leia stays on the ground with the old guys, despite the fact that it’s been established that she’s able to handle herself in a fight. She can shoot people if she has to, but adventure is something she gets to participate in only as a last resort. Otherwise, she sits on the planet and worries about Luke, as a woman should.

Luke’s story is itself remarkably male-oriented. An orphan who appears to have lost both of his parents, Luke and the script are focused entirely on the absence of his father. When he runs into Obi-Wan Kenobi (Alec Guinness), Luke is excited to think that the surrogate father figure may have known his real dad — but there is no suggestion, or mention, of the possibility that Kenobi might have known Luke’s mother as well. Instead the Jedi passes on Luke’s dad’s lightsaber as a phallic rite of passage. Later films in the franchise will complicate that relationship, and eventually Luke’s mother does show up — but it’s remarkable in the first film how little she matters, or even exists. Parenthood is presented as an entirely patriarchal phenomenon; just as there are no women in the film’s present, there are none in its past.  Luke might as well have sprung fully formed from his dad’s forehead.

OK, clearly the initial “Star Wars” film isn’t the last word on women in the series. Leia gets more of a role in later installments, other women appear in the prequels; and the expanded universe of novels and comic books (which I haven’t read), are supposed to include a number of other important female characters. But the bleakly male starscape of that first film is pretty hard to ignore. “Star Wars” is not a film that cares about women; on the contrary, it is a fantasy, in a lot of ways, of a universe in which women do not exist.  And more than three decades later, the gender dynamics of "Star Wars" still seem teleported from a long, long time ago.