GOP's white Southern men problem: Why they can't hold Democrats down any longer

The days of the left humiliating itself in an effort to woo these voters are over. They're the right's problem now 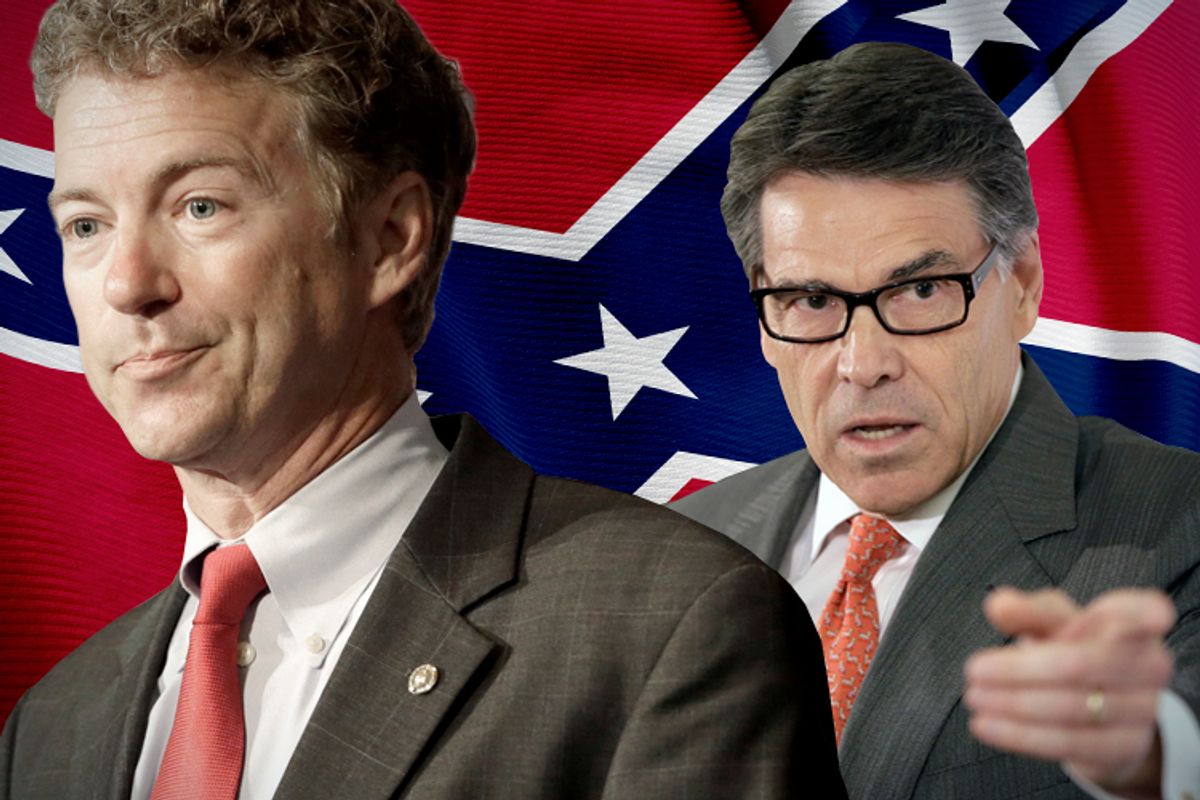 In a very famous (and possibly apocryphal) quote, Lyndon Johnson said upon signing the 1964 Civil Rights Act that the Democrats had lost the South for a generation. And there's little doubt that the Republicans immediately saw a path to a new majority. That realignment took more than a generation to gradually happen, but happen it did. The GOP  marched through one election after another burning down every Southern Democratic stronghold in its wake.

And the Democrats have been bemoaning their Lost Cause ever since. For decades it was an article of faith that the only way for the Democrats to achieve a real majority again would be to recapture that Southern white vote. They agreed that they had to only nominate sons of the South who could speak the lingo.  And they had to ensure that they never again spoke ill of guns, only spoke ill of gays and always praised God as if every day was an evangelical revival meeting. This was best articulated by a strategist by the name of Mudcat Saunders who spelled it out as clearly as anyone's ever done it:

SouthNow: What’s the prescription for Democrats?

Mudcat: There’s only one prescription and that’s tolerance. I’m a white, southern male who hunts. I’m a member of the Sons of Confederate Veterans, which has two black members, by the way. I don’t know how many northern Democrats who have tolerance for my kind.

Saunders, who has worked on the campaigns of Mark Warner, John Edwards, and Bob Graham, thinks that if Democrats ease up on the culture stuff they can win in the South: "We’ve got an affection for big guns and fast cars. It’s a macho thing. I’ve not seen any attempt by the Democrats to get into that culture."

He was wrong about that. They tried, oh how they tried. It just didn't work. And why was that? Well, the Democrats have a constituency that these rural, white Southern males aren't too fond of. Several as a matter of fact.

Here's Mudcat in a different interview spelling it out:

Mudcat may be a little cruder than most but he was far from alone in thinking this way. The problem was that Democrats just couldn't thread that needle. The party of people of color, feminists, urban dwellers and gays was not going to be particularly appealing to Mudcat's Bubbas regardless of how often Democrats like Howard Dean excitedly exhorted them to vote for their own self-interest:

"White folks in the South who drive pickup trucks with Confederate flag decals in the back ought to be voting with us and not them, because their kids don't have health insurance, either, and their kids need better schools, too."

You'd think so, wouldn't you? Entire books have been written about this strange phenomenon in American political life that explains in great detail why they don't. Let's just say they would rather die than vote for a Democrat. Literally.

If you want to see that vividly illustrated, look at this from the Democracy Corps' latest polling.

It turns out that you can no longer assume that "rural" and "Southern" align, at least not when it comes to healthcare. Across the country, people are starting to warm up to the healthcare reforms and want to see it successfully implemented. But Southern, rural white voters are still opposed. And they aren't budging. These are unattainable voters for the Democratic Party and have been for a very long time.

Unfortunately, as Joshua Green points out, this is still somewhat relevant in the upcoming congressional elections where some Democrats have managed to hang on to their seats by their fingernails long after most of the old Southern Democratic Lions shuffled off their mortal coils, while others slipped in on a fluke. He points to Rep. Patrick Murphy, Fla.-18, Rep. Joe Garcia, Fla.-26), Rep.John Barrow, Ga.-12, Rep. Pete Gallego, Texas-23, and Rep. Nick Rahall, W.Va.-03) as being in particular trouble.

Let's just say that if those fine fellows fail to win another term, progressives are not going to mourn their loss. They are among the most conservative Democrats in the House, routinely crossing the aisle to give aid and comfort to the Republicans. They've been putting "illegals" in the bait can, among other such Bubba-enticements, for a long time and it looks like it won't be enough to save them. And perhaps that's for the best. The Democrats can finally put their dreams of re-creating the Roosevelt coalition behind them once and for all. That coalition required that the Democratic Party ignore any commitment to ending Jim Crow and there's no going back to that kind of politics. There are seats outside the rural deep South they could contest.

And if those conservative, white Southern male voters ever wake up to the fact that their enemies aren't feminazis, African-Americans or Latinos and figure out just who it is who's really keeping them down, I'm quite sure the Democrats would be proud to have them back in the fold. Until then Bubba's going to be the heart and soul of the GOP. He's their problem now.