At first, the characters could seem as flat as the terrain. But the FX series has found its footing in the snow 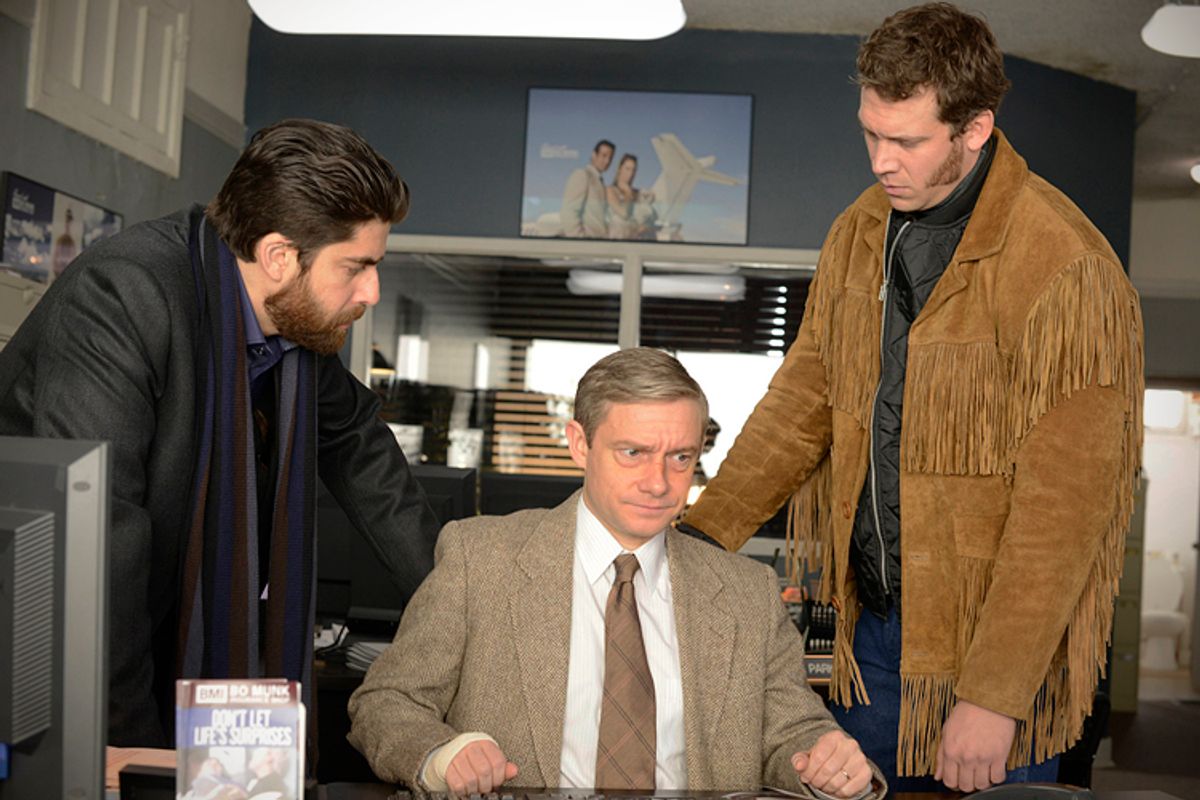 Last night, FX aired the all-important third episode of its “Fargo” adaptation. I say “all-important” merely because back when HBO, coming off quite a few critical wins, had the gall to slot “John From Cincinnati” into its heralded Sunday night lineup, I arbitrarily decided that I needed to view at least the first three episodes of any of these high-concept, heavily plotted, hour-long dramas that were slowly cropping up everywhere before I could make any sort of reasonable judgment. “John From Cincinnati” never quite took. But, thankfully, this third episode of “Fargo” was engrossing from the very first moment and, I believe, a turning point for the series.

Up until now, the show had taken place in the wintery flatlands of the Midwest – a pastiche of snow-covered fields, lonely highways, one- or two-level suburban homes and offices. But when the words that open every installment, “This is a true story,” appeared last night, they were over a glass and steel skyscraper down the road in St. Paul. The corporate environs were no less cold and isolated as Billy Bob Thornton dragged a pudgy office drone past rows of cubicles and into an elevator by his necktie. But the sequence – a smart mix of traditional cinematography, surveillance camera footage, and close-ups of a fishbowl screensaver – was gorgeous and symbolically broadened the scope of the tale considerably.

The entire episode was shot wisely and beautifully, but it wasn’t just the visual quality of the show that seemed to ramp up. Last week, the arrival of Adam Goldberg and Russell Harvard’s shticky out-of-town thugs indicated the show would continue on as a pale derivative of the original Coen brothers film. Also, it appeared that Bob Odenkirk’s hokey Chief Oswalt, operating on sheer, inexplicable ineptitude, was going to simply let Lester Nygaard (Martin Freeman), the key to the entire murder mystery, walk around town unmolested. The show was starting to feel like one of those truTV crime reenactment programs wherein the bad guy gets away just because the police bumble everything.

Fortunately, Oswalt’s intrepid deputy, Molly Solverson (Allison Tolman), finally met with Colin Hanks’ Gus Grimley, the cop most likely to bumble everything, and they began to put the pieces of the puzzle together. (I can’t believe it took me three episodes to get the gag in our heroine’s surname – Solverson.) At least for a moment, though, the mystery and the murders felt beside the point as Molly realized why Gus held onto important evidence for so long before coming forward, sharing it, and potentially damaging his own career. The scene where she bonds with his 12-year-old daughter, Greta (Joey King), is a masterful bit of understated performance for which Tolman, Hanks and King get equal credit – well, almost. If Tolman’s name doesn’t come up next year during awards season, I will have an even harder time sitting through the Emmys than I usually do.

“Fargo,” in its efforts to remain Coen-quirky, has many an unsettling tick. Odenkirk’s dimwitted Chief Oswalt is no Saul Goodman. Goldberg and Harvard’s Mr. Numbers and Mr. Wrench are – as their names suggest – still just walking props. Even Thornton’s perpetually smirking psychopath Lorne Malvo takes some getting used to – though pitting his quiet menace against Oliver Platt as the boisterous Stavros Milos, the grocery store king of Minnesota, is combustible genius. False notes and caricatures aside, in uniting the goodhearted Solverson with Hanks’ heartbreakingly vulnerable Grimley, the show has revealed its emotional core and finally elevated  above the flat terrain of Bemidji, Minnesota.