You knew it was true. Now research proves it! The real motivation behind Rush, Sterling and defenses of awfulness 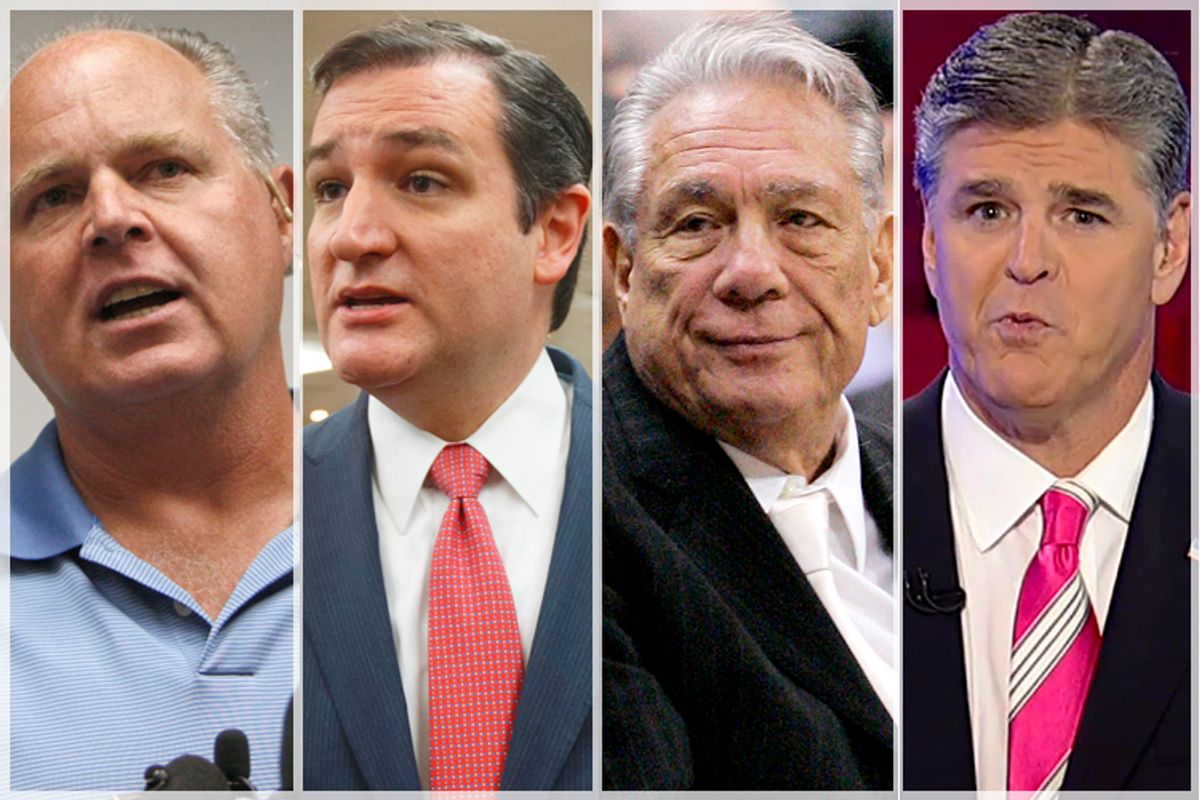 It's not the least bit surprising that Rush Limbaugh is still defending Donald Sterling, spinning an elaborate conspiracy theory about how Sterling was “set up,” as Elias Isquith described here at Salon: “Whoever set this up,” Limbaugh said with understated drama, “is really good.”

He continued: “They covered every base. They’ve got the media wrapped around their little finger. I mean, when you get rid of the anthem singer — I used to be in charge of anthem singers at the Kansas City Royals. When you can get rid of (the) anthem singer, you’ve got power.”

Sure, it's so far gone it's silly, but defending old white guys is Limbaugh's thing. Especially rich old white guys. And when he does it, he's simply being a good conservative. Defending wealth, power, privilege, hierarchy — it's just what conservatives do. Now, however, some folks — including social scientists — are beginning to ask, in effect, if they're not actually defending, even promoting, evil as well.

Sterling's self-immolating drama vividly illustrates what the questions involve. It's not just that Americans — unbeknownst to Sterling, Cliven Bundy and Limbaugh — have come to an overwhelming consensus that racism itself is evil, though that's certainly enormously important in and of itself. But there's also the additional factor of interpersonal depravity — psychopathy, if you will, which people are increasingly coming to see as significantly overrepresented in the 1 percent.

Let's start with what I said about Limbaugh simply being a good conservative when he rushed to Sterling's defense. That's not just a liberal canard. It's not just me trying to do to Limbaugh what Limbaugh does to liberals. It's what conservatives themselves have said repeatedly over the years. The defense of hierarchy is what conservatism is all about, as Corey Robin reminded us all with his recent book, "The Reactionary Mind."

What's more, the differences between how liberals and conservatives think are reflected in a range of divergent cognitive processes, as summarized in a 2003 paper by John T. Jost and three co-authors, “Political Conservatism as Motivated Social Cognition,” a “meta-analysis” that brought together findings drawn from 88 study samples in 12 countries:

“The core ideology of conservatism stresses resistance to change and justification of inequality and is motivated by needs that vary situationally and dispositionally to manage uncertainty and threat,” Jost and his co-authors wrote in the abstract. These are not merely American phenomena, nor is there any reason to think they're particularly modern.

While Jost's paper revealed a complicated array of different factors involved, two in particular have been shown to explain the lion's share of intergroup prejudice: right-wing authoritarianism (RWA) and social dominance orientation (SDO). John Dean's book "Conservatives Without Conscience" focused on the combined workings of these two factors. While there is some overlap between the two, RWA is more predominant among followers, who would probably make up the main bulk of Limbaugh's audience, while SDO is more prominent in folks like Sterling.

SDO represents a generalized tendency to support groups' dominance, whether the groups are defined biologically (men over women, the old over the young) or culturally (race, ethnicity, religion, etc.).

These are balanced with statements supporting equality, such as:

It's not hard to see why SDO relates to defense of hierarchy, and can serve to support the defense of just about any privileged group. It's not one and the same thing as conservatism, but it's an integral part of the mix, and conservatives as a group routinely score significantly higher on SDO than liberals as a group do.

But what about the connection to evil?

A few weeks ago, I came across a reference to an unpublished conference paper, with the intriguing title, “Does endorsement of hierarchy make you evil? SDO and psychopathy."

So I contacted the lead author, Marc Wilson, a New Zealand psychologist at Victoria University of Wellington, to ask him about his research.

First, a bit of background. Psychopathy — once thought to be an all-or-nothing condition — is now understood in a dimensional fashion (more or less) and is measured by instruments such as The Hare Psychopathy Checklist-Revised. While our understanding of psychopathy first developed largely from studying criminal populations, Hare himself has said, “I always said that if I wasn’t studying psychopaths in prison, I’d do it at the stock exchange,” so it's fairly straightforward to measure and compare psychopathic tendencies and SDO. And that's just what Wilson has done.

“The research shows that SDO and psychopathy have a reciprocal causal relationship over time -- as people become more social dominant, they become more psychopathic, and vice versa,” Wilson told me. “This is based on longitudinal research that shows that, for example, increased SDO (or psychopathy) at time 1 predicts greater psychopathy (or SDO) at time 2. I've done this for both convenience samples (university students) and thousands of general population.”

University students get tested a lot — as Wilson indicated, they're quite convenient. But sooner or later it's bound to raise questions of just how well the results hold up in a larger population. So it's significant that he's already taken that step, and found confirmation as well.

“When SDO was originally proposed, it was argued that group dominance (as measured by SDO) is not the same thing as individual level dominance, and indeed that's what the original research appeared to show,” he explained. “More recently there have been a few studies that have suggested SDO and psychopathy are related, and I've collected a lot of data now that leads me to believe they're flip sides of the same coin -- interpersonal dominance (psychopathy) on one side and group dominance (SDO) on the other.”

This is just what one might informally conclude from listening to the Donald Sterling tape. His personal abusiveness and unwarranted accusations against V. Stiviano is on one side of the coin; flip it over, and his contempt for black people is on the other. Jerk on one side, racist on the other.

“Therefore, it makes sense that environments that promote social hierarchies will also be fertile breeding grounds for individual dominance, and vice versa,” he continued. Digging down a bit into specifics was quite illuminating.

Crazy artists? Try crazy businessmen. Crazy stock-traders. That's what Wilson's research shows you're far more likely to find. Not the wild-eyed kind of crazy we've all been led to expect, but the button-down, conservative kind we heard in the Donald Sterling tape — or that we can hear on Limbaugh's radio show, or see on Fox News any day of the week.