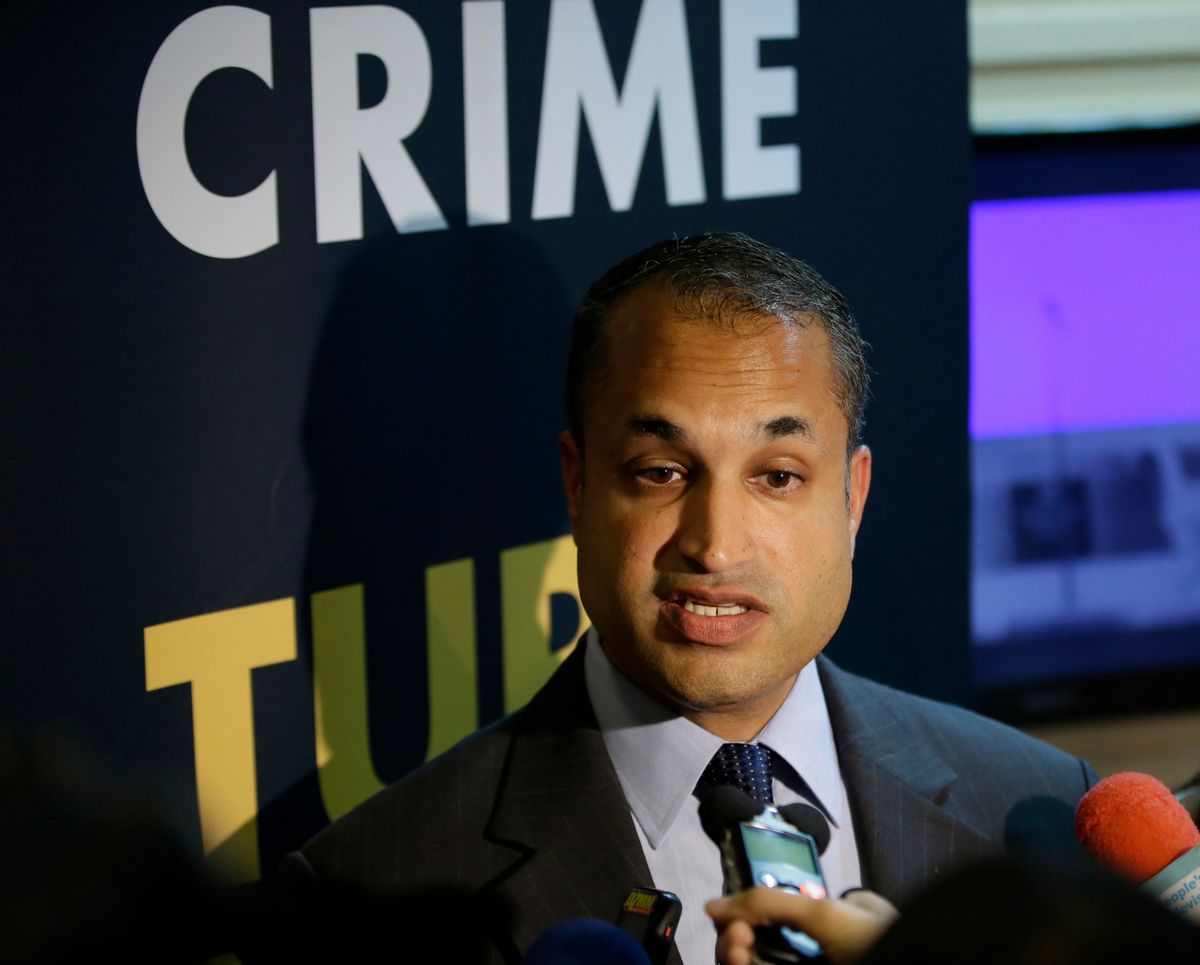 INTERPOL Digital Crime Centre Director Sanjay Virmani, is interviewed by reporters following a news conference Friday, May 2, 2014 at the Philippine National Police Headquarters at suburban Quezon city northeast of Manila, Philippines. Philippine police, backed by Interpol, have arrested dozens of suspected members of an online extortion syndicate who duped hundreds of victims worldwide into exposing themselves in front of webcams or engaging in lewd chats, including a Scottish teenager who committed suicide after being blackmailed, officials said. (AP Photo/Bullit Marquez) (Bullit Marquez)
--

MANILA, Philippines (AP) — Philippine police, backed by Interpol, have arrested dozens of suspected members of an online extortion syndicate who duped hundreds of victims worldwide into exposing themselves in front of webcams or engaging in lewd chats, including a Scottish teenager who committed suicide after being blackmailed, officials said Friday.

At least 58 Filipino suspects in the capital, Manila, and three other regions were arrested this week after investigators from Interpol, the U.S. Homeland Security Department and police from three other countries traced online chats from some of the victims' computers, Philippine National Police chief Allan Purisima said.

More than 260 desktop and laptop computers, mobile phones, pornographic materials and other pieces of evidence were seized during the raids by 15 police teams, he told a news conference in Manila.

"This is just the tip of the iceberg," Senior Superintendent Gilbert Sosa, director of the Philippine police Anti-Cybercrime Group, said of the arrests on Wednesday and Thursday, one of the largest hauls by local police in recent years.

Many more suspects and extortion gangs remain at large and will be pursued, he said.

Interpol said that one Filipino syndicate, based in Naga city, southeast of Manila, operated with more than 100 members. Hong Kong police also helped identify another "sextortion" syndicate based in Bulacan province, north of Manila, which targeted victims in Hong Kong, Britain, Australia, the United States and South Korea.

Easy access to the Internet, a relatively lower risk of arrest and big financial gains have caused such crimes to flourish in recent years in countries such as the Philippines.

The syndicates prey on mostly male victims by employing women with fake Facebook accounts who strike up online chats with them. The victims are duped into engaging in lewd talk, exposing themselves before a webcam or performing a sexual act which are recorded and used to blackmail them, Philippine police said.

Interpol said it was difficult to estimate numbers, but said there could be "hundreds of thousands" of such victims across the world by targeted by online extortion groups. They usually ask for $500 from a victim but there have been demands of up to $15,000, Interpol said.

"The scale of these 'sextortion' networks is massive and run with just one goal in mind, to make money regardless of the terrible emotional damage they inflict on their victims," said Sanjay Virmani, director of Interpol's Digital Crime Center.

Hong Kong police Inspector Louis Kwan Chung-yin said more than 470 people from Hong Kong were victimized last year and about 160 so far this year. A U.S. Embassy official said American military personnel were among the victims in the United States.

Three of the arrested Filipino suspects were believed to have victimized Daniel Perry, a 17-year-old mechanic, who took his own life by jumping off a bridge in Scotland in July last year after being blackmailed, Sosa said. The BBC has reported that he took his own life after being warned that his video conversations would be circulated to his friends and family if he didn't pay up.

Gary Cunningham, a police officer from Scotland, said criminal complaints would be filed against the three Filipinos if there was enough evidence to connect them to the blackmail.

"You cannot imagine the impact this has had for Daniel Perry's family," Cunningham said. "They're still trying to cope with the circumstances."