Meet the man behind the 2014 World Cup

No, it's not Sepp Blatter. One Pakistani CEO has fulfilled his professional dream of designing the tournament ball 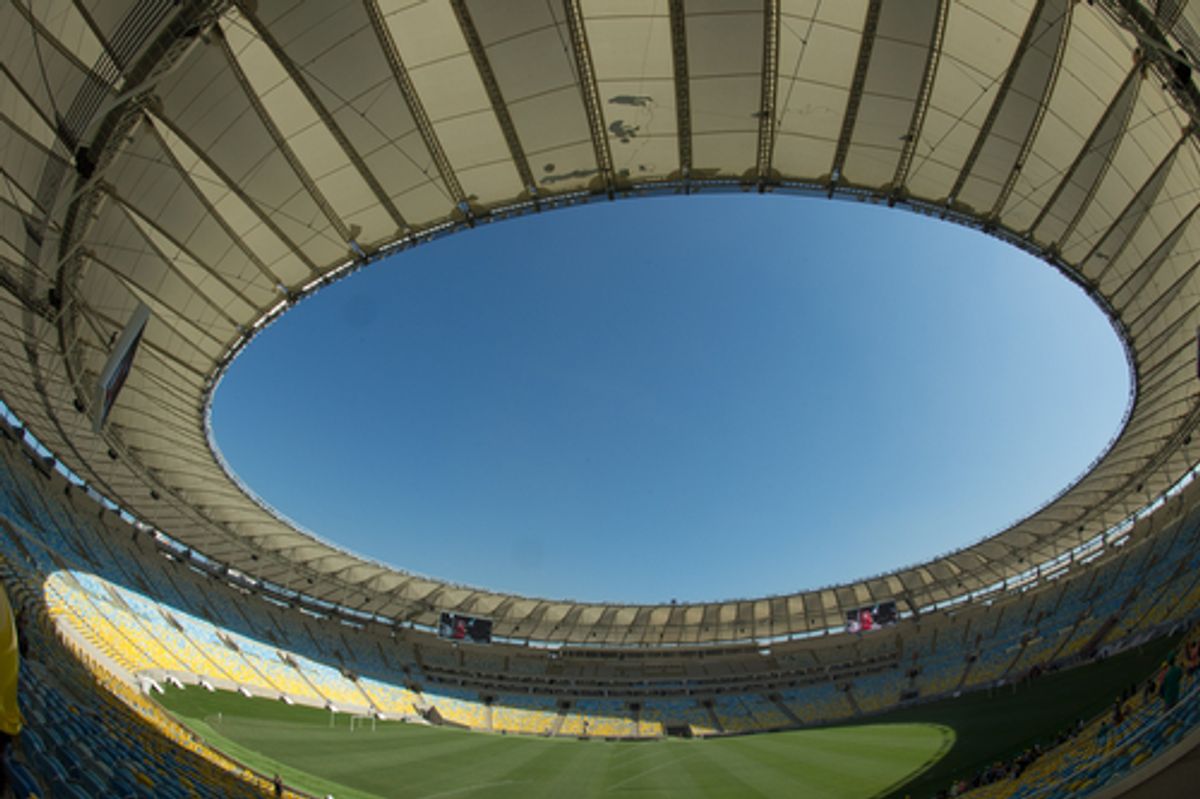 SIALKOT, Pakistan — When the world’s top soccer players take to the pitch in Brazil this summer for the FIFA World Cup, few will spare a thought for the ball. But as the teams battle it out for victory and the chance to lay their hands on the World Cup trophy, those orbs on the field will show that one man has already achieved his goal.

In the boardroom at Akhtar's factory is a stand proudly showcasing all the balls his factory has made for major soccer events. He has made the official ball for Europe's UEFA Champions League, the Africa Cup of Nations and the German Bundesliga. But the top position of the stand has remained empty, waiting for an official FIFA World Cup ball.

In 2010, when the last World Cup took place in South Africa, the official ball was exclusively manufactured by a factory in Shenzhen, China. But this year, Akhtar's factory is also making the official ball, which has been named the Brazuca in reference to the host nation of this year’s World Cup, Brazil.

"When they announced that we would be making the official ball we had a party," said Akhtar, as we toured his factory. "This gives us good satisfaction that this big brand has trusted us that the job can be done in Pakistan. It is very exciting, not only for me but for my colleagues and the country."

Pakistan is not a country commonly associated with soccer — or football, as soccer is called in most countries apart from the United States. The South Asian nation is better known for its prowess on the cricket pitch. It is cricket, not football, that is played in narrow back alleys in cities and towns or on any spare open stretch of ground in villages across the country: an empty bottle crate for a wicket and a homemade bat fashioned out of a wooden plank. A tennis ball carefully wrapped in tape produces that distinctive 'tok' of bat on ball.

But Pakistan is the undisputed champion of football making. For more than a century, the garrison town of Sialkot, in the northeast just a few miles from the border with India, has been producing hand-stitched footballs. Today the industry is increasingly mechanized, and Sialkot's football makers produce around 60 million footballs a year, making up 70 percent of the world’s production.

Akhtar acknowledges that it is Pakistan’s plentiful cheap labor that has allowed him to compete with China, where labor costs have risen sharply in recent years. Akhtar says that he pays his workers the minimum wage, currently 10,000 rupees per month (US$102).

But the industry has had to sharply clean up its act. In the ’90s, Sialkot’s football industry became notorious for child labor. Most footballs were then stitched by workers at home, and sold to a middleman, which made it difficult to tell who was actually stitching the balls.

While a series of initiatives in the late ’90s by UNICEF and the International Labor Organization, supported by the Sialkot Chamber of Commerce and the major brands including Adidas and Nike, removed the practice from the big factories, some of the hand-stitched balls produced by small suppliers are still made by workers at home.

Local activists say that it is impossible to be sure that no children are stitching some of the footballs produced in Sialkot. According to estimates by the Pakistan Commission of Human Rights, almost 10 million children in Pakistan are believed to involved in child labor.

Sialkot's football making industry is yet another hangover of British colonial rule, or so local legend has it. Prior to the partition of India and the creation of Pakistan, Sialkot was home to hundreds of British soldiers. One day as the soldiers were enjoying a kick about, the legend goes, they punctured their ball. They took the ball to a local cobbler and asked him to repair it. Impressed with his work, the cobbler became the go-to football repairman.

Over time, the story goes, the cobbler carefully studied the construction of the ball and set about trying to replicate it. When he was satisfied with his design, he presented it to the soldiers and persuaded them to buy balls directly from him rather than bringing them fromEngland. And so began Sialkot's football making industry.

Today Akhtar's factory is the largest football producer in Pakistan, primarily manufacturing footballs for Adidas. Only a tiny fraction of the footballs made at Akhtar's factory on the edge of Sialkot are hand stitched. Most are machine stitched — still a highly labor intensive process involving hundreds of men and women hunched over whirling sowing machines. And some — including this year's World Cup ball — are now "thermal bonded," a seamless way of making footballs. The thermal bonded technology is the only way of making balls that meet FIFA's newly introduced strict rules related to the roundness of the ball.

The balls go through a rigorous testing process at the factory before being deemed fit to be kicked by the world's soccer stars. There are 80 tests, Akhtar explains, as we walk through a warren of laboratories. The lab technicians dressed in white lab coats and goggles dart between the labs, monitoring the range of football experiments.

The balls are subjected to heat, humidity, and high intensity UV rays to see how they'll cope with the harsh Brazilian sun. There are tests to see if the printed designs will withstand the pace of the match, and a machine that fires the balls at a metal studded plate at more than 60 kilometers per hour (37 mph) — apparently the speed that the ball can reach when kicked by a top striker. If the ball passes the test, it can then enter mass production.

The factory also makes bags for Adidas and there are machines that mimic the effects of the roughest airport baggage handlers, including a machine officially named the "bag handle jerker."

As Pakistan’s economy otherwise flounders, Akhtar's factory is a success story and he has been awarded the “Best Export Performance Award” by the Pakistani government for the last seven years. "You see the prime minister changing, but I stay the same," said Akhtar, indicating the line of photos in the boardroom that records his impressive track record.

Sialkot has been largely insulted from the violent Islamic insurgency that has brought business almost to a standstill in other parts of the country and has devastated the country's economy. There has never been a suicide bombing in the city — though the city is heavily guarded and dominated by a fortified army cantonment.

But the country's power crisis has not left anyone untouched. Crippling energy shortages leave swathes of the country without power for up to 18 hours a day. At the moment Akhtar relies on expensive diesel-powered generators for 12 hours a day — an improvement, he says, from a year ago when he only got electricity from the grid for around three hours. The power cuts will likely get worse as the summer heat kicks in and so do the air conditioners, further burdening the strained grid. During the summer months the electricity shortfall can reach 60 percent.

The factory employs about 3,000 people, making it one of the largest employers in the area, and it is the only factory that employs women — providing a rare opportunity for formal employment for women in rural areas. There are currently around 600 women on the assembly line.

But despite making footballs for a living, the love of the game has not rubbed off on the workers. "We made the employees a football pitch," says Akhtar, gesturing toward a large grassy area on the edge of the factory compound. "But they started playing cricket instead."