The slow, tragic death of the LGBT publishing industry 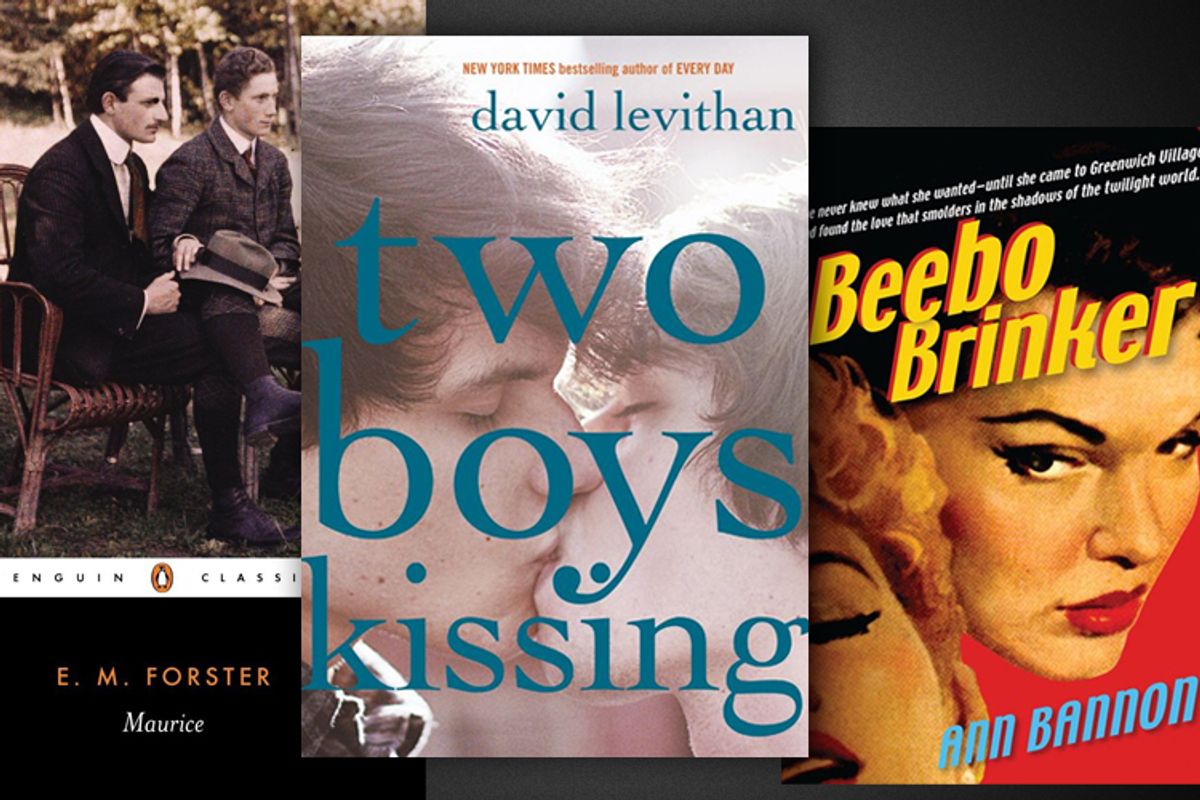 Giovanni’s Room in Philadelphia is the oldest and possibly largest LGBT bookstore in the nation. And now, after four decades, it’s closing. This news should make everyone involved in the business of LGBT literature — publishers, editors, authors, reviewers, and, of course, readers — pause and consider what this means for the future of their industry.

I have been close to Ed Hermance, the owner of Giovanni’s Room, for many years. In my 20s, I was a frequent customer of the bookstore, taking the train from southern New Jersey to purchase books and magazines. In my mid-30s, while attending graduate school at Rutgers-Camden, I worked at the store. Somewhere in-between, I started Lethe Press, and have sold many books to Ed over the years. I think he harbored a dream that I would one day buy the store from him. But in the 21st century, the thought of owning a bookstore was a daunting one — news of such stores closing across the country was a common article in the pages of “Publishers Weekly.” No, I hoped Ed, when he did decide to retire, would find someone who could devote time to the shop not as a publisher or an author but as a devoted reader and eager bawd of LGBT books, pressing important titles into the hands of customers.

Now the sad news is that Giovanni’s Room will be closing. There will be one fewer LGBT bookseller in a major metropolitan city that has a smattering of gay bars and nightclubs (Grindr cannot serve you drinks or host drag shows), a newspaper, the Philadelphia Gay News, that is thinner than a comb-over.

As a confidant of Ed’s, I was aware of his attempts to sell the store and buildings (which he owns). Before Towleroad.com broke the story to the general public, I was told that the last, best deal had fallen through. Towleroad is just one of many gay news/gossip sites that focuses its attention on maybe-straight stars, club music, gay rights successes and failures, and movies and television. Oh, once in a while such a site covers books: a memoir by a star coming out, coming back and slapping our backs in solidarity. They have a reviewer who does review literary gay books, which is ironic since the prior post is likely to be about Zac Efron’s abs.

The comments section of Towleroad is a back room of trollish delight. There were only a few comments regarding the closing of Giovanni’s Room, but they were unoriginal in addressing the loss to the community. When Lambda Rising in D.C. closed, when the California bookstore chain A Different Light closed, when Oscar Wilde in New York closed, we heard the same litany. But my hope is that somehow we might actually learn something from Giovanni’s Room, or at the very least start a dialogue about the importance of LGBT publishing.

The first is that the time of bookstores is simply over, that Amazon has basically swallowed them whole. But before there were LGBT community centers, there were bookstores. And bars. Both were safe places to go to meet other men and women. Ask anyone over 40 in a metropolitan setting if they ever cruised someone while looking for the newest Armistead Maupin or Ethan Mordden saga and you are likely to get a wistful expression.

But bookstores were more than precursors to back-room trysts: Other than newsstands that might sell, in the very back, gay magazines like Blueboy or pulp novels with lurid titles, where could an LGBT man or woman find a story that featured a protagonist with whom they could identify? Not the seats of the local cinema; in much of the 20th century, LGBT characters were punished for their desires even as the printed works had grown more forgiving. Far better to read “Maurice” or “Beebo Brinker” than watch “Billy Budd” or “The Children's Hour.” And most queer folk were expunged from films based on gay books. "The Lost Weekend" is more than an apt title for what Hollywood did to poor Don Birnam.

Here’s where the Amazon.com bête noire rears its ugly head. Full confession: Lethe Press sells through Amazon. For any publisher not to make use of the largest bookseller in the nation would be akin to Kellogg's refusing to be on the shelves of Wal-Mart. Though their profits are probably less than they would like, they reach a lot of folks hungry for cereal. But the same is not true for gay publishing. Amazon has become as cluttered as a physical used bookstore. With the advent of print-on-demand publishing, and Amazon encouraging anyone and everyone to create a “bestseller,” the sheer number of titles has ballooned to an imbroglio no matter what the genre.

At a bookstore, you can browse the shelves, open a book, sample its pages as well as those of its peers shelved in the same category or by the same author. With Amazon, if you do not know the author or the title or a great deal of the plot; your chances of finding that book you overheard friends talking about is like a pricking yourself while rolling in a haystack. Good luck. Oh, and during your online hunt, you’ll be forced to look at so many lurid covers — because isn’t gay publishing about sex, sex, sex? — that searching for a book has become, at times, not-safe-for-workplace.

LGBT bookstores failed for many reasons. Passionate readers do not always make good businessmen or women. Neighborhoods that were known to house LGBT people were often low-rent until gentrification caused retailers to abandon spaces.

Some argue that the need for “gay” retailers is disappearing thanks to assimilation — that I am an American first and foremost, who just happens to act a bit fey, so I should just go to a normal bookstore and find the latest Christopher Rice or Sarah Waters. Ahh, the assimilation argument. I would love to walk into a generic bookseller and see LGBT authors prominently shelved. And the major authors, who are published by major presses, already are. David Sedaris. Val McDermid, one of the most read mystery authors in the world. These individuals are assimilated into whatever genre they write in and unless you knew they were gay, you could pass over their books without a second thought. Thank you, America, for hiding the authors’ and the characters’ sexuality. (I promise that none of these covers will be lurid — don’t tell me David Levithan’s “Two Boys Kissing” is lurid. Young adult literature is growing more accepting of LGBT themes, but how many stores have Levithan’s latest spine out?)

In Barnes & Noble, the “gay” shelf is often a single shelf of mixed erotica and university presses with maybe a memoir or a book about Matthew Shepherd. If you wanted to read a gay book — assuming you are not so assimilated that you only want to read about everyday Americans, the vast majority of whom are somewhat favorable to your “lifestyle” and enjoy laughing at fey or butch minstrel characters on television — you have to special-order the book. Which means you are essentially coming out to the busy clerk at the help desk. Can you? Will you? Or will you retreat back home and search again and again for something on Amazon that sounds like a book you want.

Then there’s the argument that the community has failed the local bookstore. Alas, this comment is almost always true. I remember working the front counter of Giovanni’s Room and men and women entering the store at all hours asking to hang posters or leave fliers for their LGBT event or cause. We always agreed and gave them space. And how many of these individuals would then walk around the store. None. We would get people associated with functions and charities and socials approaching Ed for gift certificates to offer as door prizes or silent auctions. And he would never refuse. And after he handed the certificate over, out the door they went.

So now we have one fewer gay bookstore. The absence will cause a ripple effect in LGBT publishing. For Lethe, well, we did a significant business with Giovanni’s Room because it tried to reach the full spectrum of queer readers. Our bear culture books had an entire shelf and were ordered again and again — how many gay books feature husky and hirsute protagonists? Few. And so such readers were grateful to be catered to. My revenue will drop. Other gay and lesbian presses will suffer, too.

Local authors will be hurt. Many of these write series, such as mysteries — and readers, many of whom do not depend on the Internet for their book news, would learn of a new title in the series only by seeing it on the shelf. Ed gave local authors prominence: window displays and stacking by the register. Amazon will give them nothing, perhaps not even mention of Philadelphia. These authors will see their royalties dip significantly.

How individuals learn about new books, or old classics that deserve to outlive their authors, is tricky. In the early days of LGBT publishing, there were few titles available so the clerks and owners were more likely to have read each and every one. Even in the last few years, Ed Hermance and his staff could recommend books with ease. Want to expand your awareness of transgender issues? Looking to study Oscar Wilde’s trials? They could offer more than a single recommendation. They were eager to do so.

How do gay readers find books? There are very few websites and they tend to specialize. Band of Thebes is focused on literary books — not all of them gay. And, yes, they link back to Amazon rather than Indiebound.org to help local retailers. Out in Print covers a wider array, but because it is a one-man operation, it is gasping for breath and may not last long. We have to hope that the new Chelsea Station Magazine, which features a new review every week, can survive and prosper.

What of the publishing and library industry magazines? Certainly Publishers Weekly, Library Journal, School Library Journal (all owned by the same company) or Booklist would offer reviews of worthwhile LGBT books? Sadly, this is also an unlikely event. All these magazines focus almost exclusively on books by major or university presses. The largest LGBT publishers — Bold Strokes Books, Lethe Press, MLR Press, Bella Books — are all but ignored by these sources … unless they pay for attention.

So LGBT books are forced to the edges, to the shadows, despite claims of assimilation. Gay authors have to do more and more marketing to find readers. Gay publishers have to struggle with shrinking venues to showcase their titles. The death of Giovanni’s Room isn’t merely a stab at the heart of a community in Philadelphia; it’s one more victim of an ailment that sickens us all.

Steve Berman is a devoted reader who occasionally writes and edits. He has been a finalist for numerous awards, including the Andre Norton Award for Young Adult Science-Fiction and Fantasy. He owns and operates Lethe Press, which publishes 20-some books a year. He lives in southern New Jersey.