Commencement addresses are TED Talks, all humblebraggy and eager to go viral. DFW and Saunders make them real again 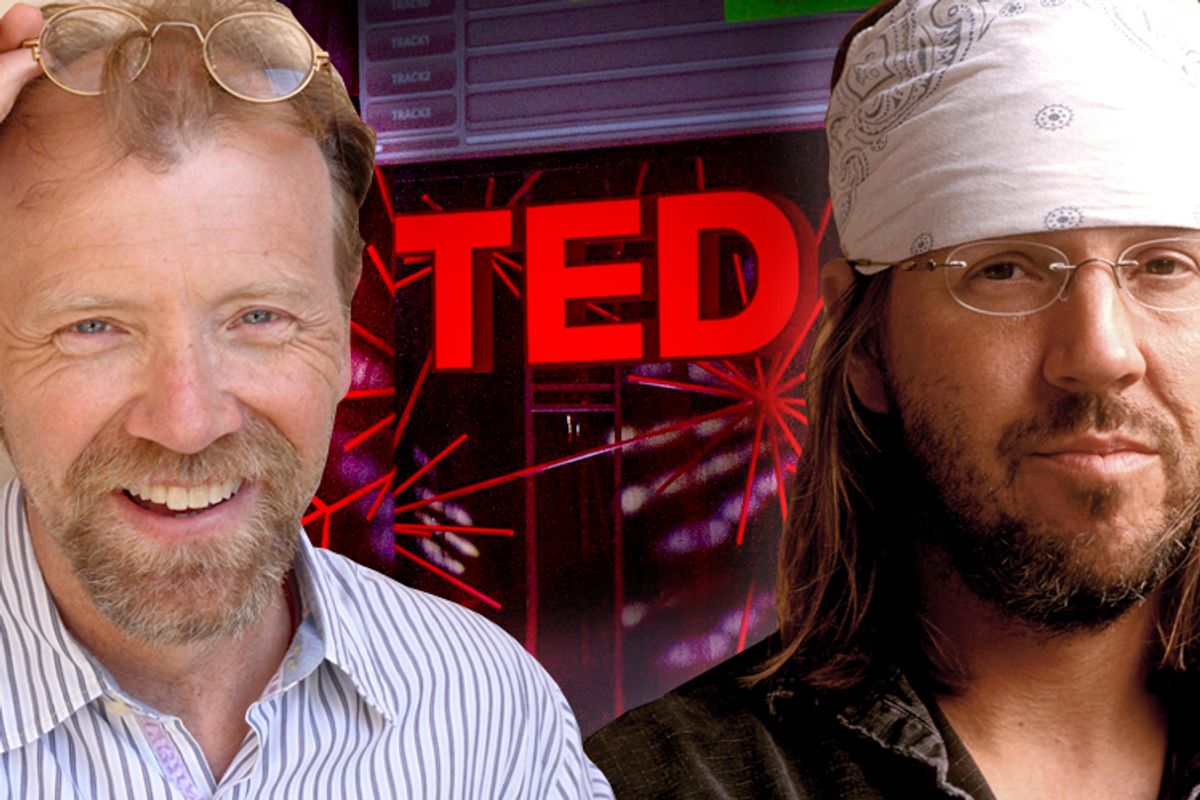 I remember little about the commencement address from my college graduation. The speaker was a research scientist of some sort, and he droned on for nearly 45 minutes about breakthroughs in the human genome project and other worthy scientific undertakings that had scant relevance to a graduating English major with uncertain employment prospects. Far from feeling inspired, I was mostly irked that the speaker had broken the principal rule of effective commencement addresses: brevity, above all.

My experience is not uncommon. Zoning out during commencement addresses has long been a rite of passage for graduating seniors. Fairly or unfairly, commencement addresses have gained a reputation as rote affairs that launch young adults into the outside world with galvanizing platitudes. Garry Trudeau, the creator of the comic strip "Doonesbury," offered a more pessimistic take in his 1986 address at Wake Forest University: “The chief function of the graduation speaker has always been to prevent graduating seniors from being released into the real world before they’ve been properly sedated.” These speeches are tranquilizing primarily because they’re formulaic: the speakers crack a few innocuous jokes, retrace their distinguished career arcs, reflect on what they’ve learned, and exhort these bright graduates before them to follow their passions. (Exhort, it should be noted, is a verb used almost exclusively to describe commencement addresses.) A data-driven journalist might break down the formula as such:

Even renowned writers stick to this formula. Consider Michael Lewis’ 2012 address at Princeton University. He starts by joking that when he secured his undergraduate degree he was “of no possible economic value to the outside world.” Yet, he adds, “somehow I’ve wound up rich and famous [pauses for laugh], sort of.” Lewis then recounts, with equal hints of incredulity and pride, how he went from directionless art history major to author of bestselling books like "Liar’s Poker"and "Moneyball." He concludes by exhorting his audience not to be blind to the role that luck has played in their success. It’s a didactic, triumphal and, ultimately, forgettable speech.

Despite this, it’s likely that those Princeton seniors at least will remember who spoke at their graduation ceremony. After all, star power is a potent antidote for combating commencement address amnesia. For several decades, there has been an arms race among universities to secure big-name speakers: Barack Obama, J. K. Rowling, Ellen DeGeneres, Bono, Arianna Huffington, Stephen Colbert, Bill Gates and on and on. Some figures have become regulars on the commencement circuit, delivering variations of the same speech year after year. Since becoming president in 1993, Bill Clinton has spoken at more than 35 graduation ceremonies. Even publicity-shy figures like "Calvin and Hobbes" creator Bill Watterson couldn’t pass up the opportunity to deliver a fiery address on artistic integrity to his alma mater, Kenyon College, in 1990. Acclaim and celebrity are more obligatory for speakers than having obtained an undergraduate degree. Sean Combs (aka, P. Diddy) will deliver the commencement address at Howard University this year despite having left there without graduating 24 years ago. In his 2005 address at Stanford University, Steve Jobs proclaimed that dropping out of Reed College was “one of the best decision I ever made,” which is a jarring statement to make at a ceremony honoring academic perseverance.

What has changed recently is the means by which commencement addresses are disseminated. These addresses are still intended for a particular class of graduating college seniors, but the ones delivered by cultural luminaries are then immediately posted on YouTube and similar websites for mass consumption and scrutiny. Tastemakers select that year’s best offerings, making sure to pull rousing quotes that can be readily shared on social media. More ambitious listicles attempt to identify the best commencement speeches ever (i.e., speeches by identifiable individuals that have been recorded or transcribed and uploaded to the Internet).

The commencement address, in short, has turned into a kind of TED Talk that viewers mine for nuggets of inspiration from admired icons who might not have the time or the inclination to deliver an actual TED Talk. The stirring pull-quotes that ricochet through cyberspace are boilerplate empowerment bromides: that failure ultimately helps you succeed, that you should follow your passions but resist being defined by your career, that service and family matter more than financial gain. “Learn from every mistake,” Oprah Winfrey advised the 2013 class of Harvard, “because every experience, encounter and particularly your mistakes are there to teach you and force you into being more who you are.” Several thousand spectators witnessed Winfrey deliver this sugary line in person, whereas nearly 1 million individuals have viewed it online. For as disposable as cocksure graduates often find these addresses, they’ve become perhaps more resonant for world-weary viewers muddling through their post-collegiate lives.

Because of their digestible form and motivational content, commencement addresses have never been more popular. CNN compiles lists of the most promising upcoming speakers, while the websites for the New York Times and Wall Street Journal reprint the full text of recent notable speeches. Artists have converted some speeches into lushly drawn comics, and production companies have turned others into earnest short films. Recently, commencement addresses by some of the country’s most celebrated writers — including David Foster Wallace and George Saunders — have been published as stand-alone books, hitting shelves conveniently in time for graduation season.

With their large type and generous margins, these books might seem like transparent attempts by publishers to make quick cash from an occasion when inspirational books make acceptable (if slightly uninspired) gifts. There’s already a lucrative precedent. The last book that Dr. Seuss published in his lifetime, "Oh, the Places You’ll Go!," continues to sell upward of 300,000 copies each spring. It remains the go-to gift for high school and college graduates. (This book, however, was not based on an actual commencement address. The only address Dr. Seuss ever delivered was to Lake Forest College in 1977. It consisted of a 92-word poem that concluded with a succinct, Seussian bit of advice: “Do a lot of spitting out the hot air. / And be careful what you swallow.”) Introducing new competition into the graduation marketplace is, quite simply, a shrewd business decision.

It’s not a coincidence that the addresses given by David Foster Wallace and George Saunders were selected for publication. Both literary authors have amassed unusually large and dedicated readerships. It’s hard to imagine that any writer of short stories other than Saunders would be asked to appear on such coveted programs as "The Late Show With David Letterman" and "The Colbert Report." Wallace’s reputation as a tormented genius who grappled with the cacophony of our media-saturated age has only grown since his 2008 suicide. His plainspoken commencement address to the 2005 graduating class of Kenyon College was perhaps the most accessible bit of writing he produced; as a result, it’s been celebrated widely as a portal into the larger philosophical questions that animated his life and work. At the popular site Brain Pickings, Maria Popova asserted that Wallace’s address peels back “the curtain on the triumphs and tragedies of being David Foster Wallace.”

As tempting as it is to interpret Wallace’s address this way, it’s best not to read too deeply into a speech so audience-specific and rigidly formal. In a lengthy piece for the New Yorker, Jonathan Franzen lamented that this address created a false impression of Wallace’s complex, contradictory character: “People who had never read [Wallace’s] fiction, or had never even heard of him, read his Kenyon College commencement address in the Wall Street Journal and mourned the loss of a great and gentle soul.” Instead, I suggest that it’s more fruitful to consider Wallace's and Saunders’ speeches as exemplary, much-needed correctives to the standard formula to which most commencement addresses adhere.

On the surface, George Saunders seems an excellent candidate to deliver a stirring version of the formulaic commencement address. Wit and self-effacement come naturally to him, and he could, no doubt, tell amusing personal anecdotes about how he doggedly pursued his passion for writing after having already embarked on a less satisfying career as a geophysical engineer. Instead, in his 2013 address at Syracuse University, Saunders reminisces about a shy girl he knew in middle school whose hair-chewing awkwardness made her the butt of her classmates’ jokes. Even though Saunders never participated in these teasing sessions, her unhappiness continues to haunt him. “What I regret most in my life,” he concludes, “are failures of kindness.”

Saunders’s speech has been rightly praised for its emphasis on the virtues of kindness, but regret and failure are equally essential themes. Saunders makes clear that our innate inclination to think of ourselves as both central to and separate from the universe leads to a sort of selfishness that prevents us from thinking of others’ needs. To minimize regret, Saunders exhorts graduates to counteract their selfishness and “err in the direction of kindness.” It’s simple, unvarnished advice, punctuated with Saunders’s sly humor. Not once in the speech does Saunders reference his writer career or accomplishments. He inspires not by holding up himself as a model for students to emulate, but by focusing on the everyday deeds and disappointments that have helped make him a more conscientious person. The speech’s freshness is entwined with its modesty.

David Foster Wallace’s 2005 address at Kenyon College is similarly focused on mundane matters, but it’s thornier than Saunders’ speech. The overarching concern of Wallace’s address is learning how to think compassionately, “being aware enough to choose what you pay attention to and to choose how you construct meaning from experience.” This is accomplished by moving beyond the hard-wired, unconscious belief that you are the center of the universe. Doing so, Wallace posits, keeps you from “going through your comfortable, prosperous, respectable adult life dead, unconscious, a slave to your head and to your natural default setting of being uniquely, completely, imperially alone, day in and day out.”

This sentence starkly exposes the vulnerability and darkness that color Wallace’s address. Wallace references suicide twice in his speech, but it's facile to think that he was foreshadowing his eventual demise — or that he intended the speech to be autobiographical at all. Wallace’s address is more like a survival guide for the adult world — or, as he puts it, a way to make it to age 30 "without wanting to shoot yourself in the head." He dispenses no-nonsense advice on how to live meaningfully amid the petty aggravations and tedious routines of post-collegiate life. What Wallace has to say isn't conventionally uplifting, but he delivers it with such earnestness and stridency that it's hard not to be moved.

Make no mistake: Graduating seniors on the whole would prefer not to ponder suicide during an otherwise joyous celebration. Commencement addresses, after all, are formulaic because the formula is safe and effective, if unmemorable and a bit soulless. The ideas are grand and the oratory rousing, but it all goes down like an oversize hot fudge sundae. Once the sugar high wears off, it can be difficult to remember what the fuss was about. What makes Wallace's and Saunders’ speeches so nourishing in contrast is their persistent attention to run-of-the-mill matters — to the hard work and effort it takes to be kind and empathetic on a daily basis — and the ways that they make those matters seem more grandly inspirational than standard commencement fare. This much is certain: If either of these addresses had been delivered during my college graduation, there’s little doubt that I would have kept more than merely vague memories of the occasion.