If you had a big TV platform, what would you ask the most controversial practitioner of the death penalty? Not this 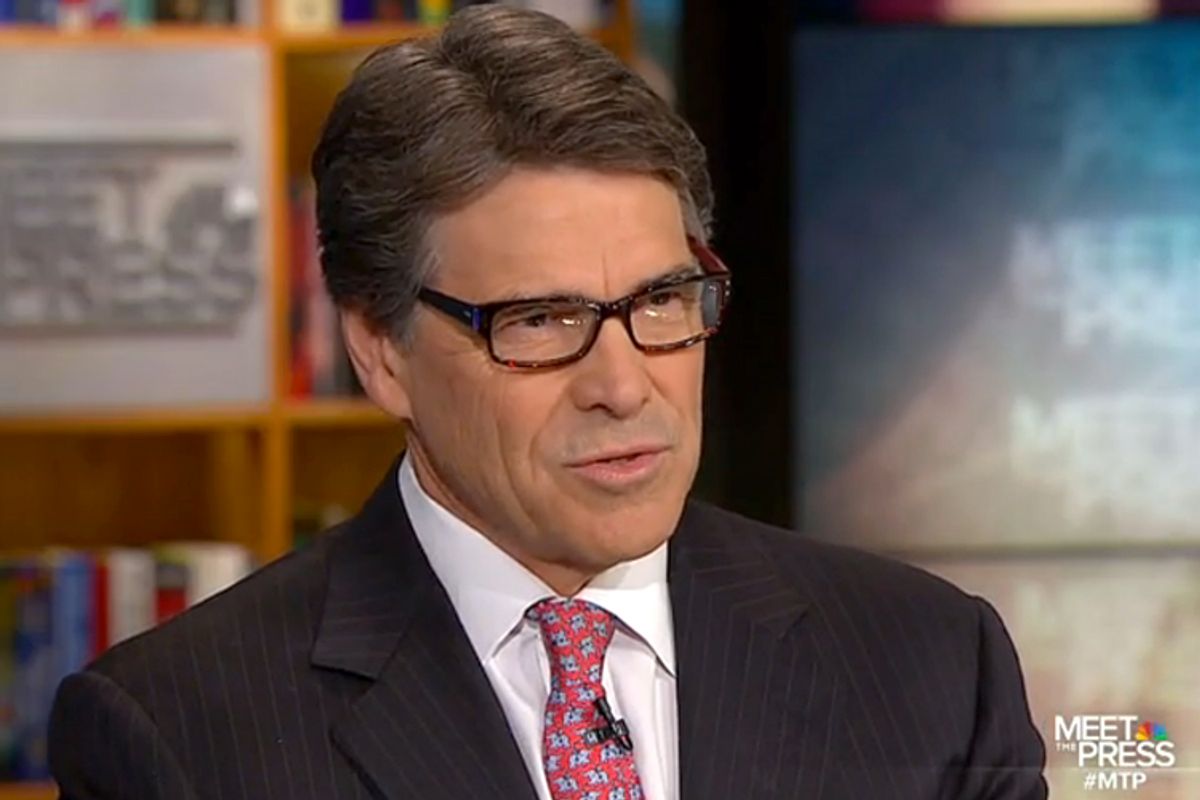 Following the botched execution of Clayton Lockett in Oklahoma last week, Gov. Rick Perry of Texas sat down with David Gregory on "Meet the Press" to discuss the death penalty in America. The interview was a big opportunity for Gregory – the gruesome spectacle in Oklahoma called into question the ethical foundation of the modern system of capital punishment, and Perry (a presidential aspirant) has overseen more executions than any other governor in modern history.

And David Gregory blew it in just about every way you can blow it.

"You've got 273 people on death row in Texas.  After what happened in Oklahoma, do you expect more challenges?"

“Even somebody convicted of a heinous crime, you don’t want to see the government responsible for forcing a heart attack because they couldn’t inject the proper lethal drugs.” (Not actually a question)

"Is it appropriate for a pause in our national discussion and application of the death penalty? The president talking about bias, uneven application, soul-searching questions that he'd like the country to take. Do you agree with that?"

In each instance, Perry defended capital punishment in his state. “I think we have an appropriate process in place from the standpoint of the appeals process to make sure that due process is addressed,” Perry said. “I’m confident that the way the executions are taken care of in the state of Texas are appropriate and humane.”

Gregory didn’t challenge Perry at any point, on anything. That’s preposterous, given the controversy Perry has faced in his state over his enthusiastic pursuit of capital punishment.

The case that most often gets mentioned when discussing Rick Perry and the death penalty is that of Cameron Todd Willingham, who was convicted of murdering his children by setting fire to his house in 1991. In the months leading up Willingham’s scheduled execution, advocates on his behalf pressed Perry and the parole board to review the investigation of a renowned arson expert, who found that the state’s arson investigators had used junk science to obtain a conviction. Perry and the parole board ignored their requests and Willingham was put to death in February 2004.

After Willingham was executed, another arson expert compiled his own investigation and came to a similar conclusion. Just days before the expert was set to testify to the Texas Forensic Science Commission in 2009, Perry intervened by abruptly replacing three members of the board, and the hearing was postponed. Two years later, after Texas Attorney General Greg Abbott issued a ruling curtailing the authority of the commission, it released a report acknowledging that outdated science played a role in Willingham’s conviction.

While it’s not known conclusively whether Willingham was innocent or not, what is known is that innocent men have been sentenced to die in Texas. Since Perry took office, five Texas death row prisoners have been exonerated. The most recent of those exonerations came in 2010, when Anthony Graves left prison after spending 18 years behind bars. His exoneration came only after Texas Monthly published an exhaustive investigation into the rank prosecutorial misconduct that led to his conviction. Perry, asked to comment on the Graves case, said it shows that the system works. “I think we have a justice system that is working, and he’s a good example of — you continue to find errors that were made and clear them up.”

This is all part of Perry’s record – the record he’d be judged on were he to be the Republican nominee for president in 2016. Gregory didn’t ask about any of it, even as Perry talked up his confidence in his state’s disastrously flawed capital punishment system.