National security is one of the right's best organizing principles. But first they need a controversy 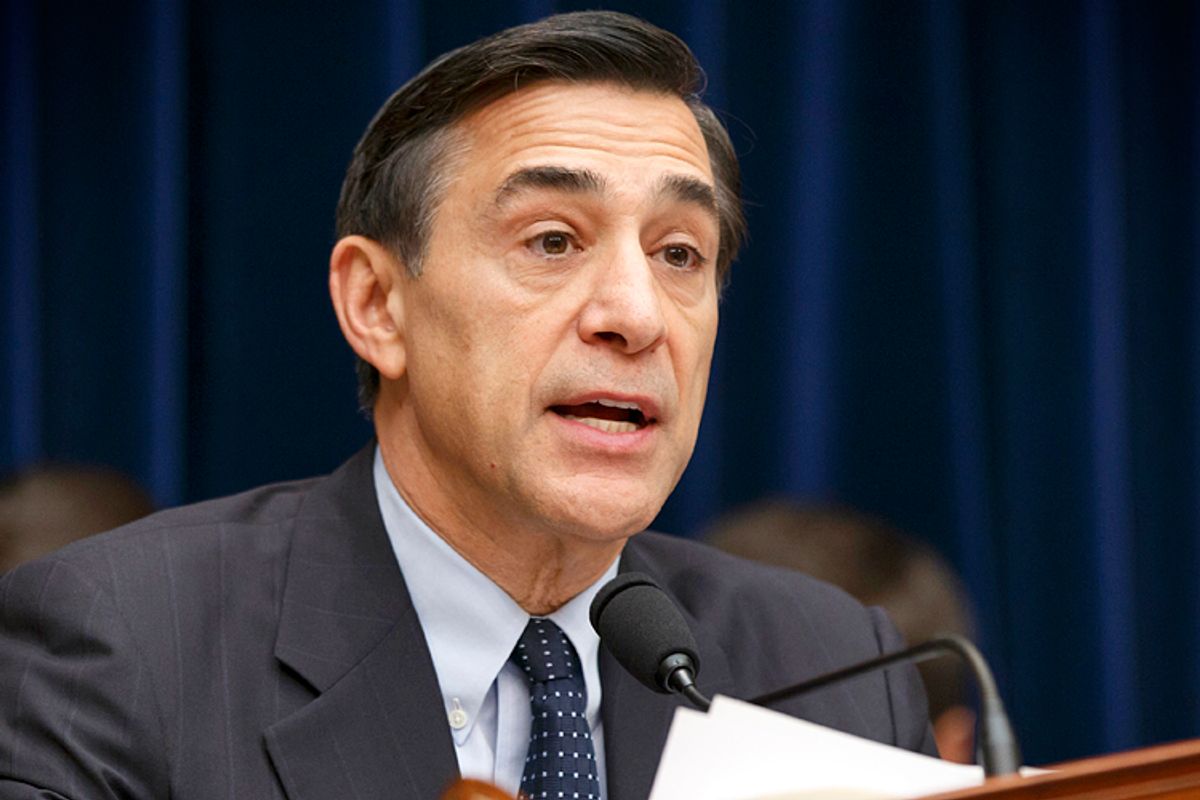 Has anyone ever seen a full-blown marketing campaign replete with full-color graphics used to announce a House committee investigation? You have now:

I'm going to guess that was in development for a while. Somebody worked up a whole strategy for making the Big Announcement. You have to give them credit. What could have been a dull Friday with the only news being some good jobs numbers and Obamacare still not imploding. Instead the D.C. establishment went into another collective frenzy over Benghazi!™

The Republicans may be terrible at governance and they may even be awful at politics. But if there's one thing they know how to do it's stoke a scandal. In fact, it's their very special gift and one to which they can always turn to rile up the rubes and make the Democrats dance on the head of a pin.

I won't go into the details of the latest alleged "revelation" that supposedly prompted the new investigation (that they've obviously been planning for a while). You can read all the charges, countercharges and explanations all over the Internet. But the truth is that while it's important for journalists and officials to produce the straight story, the substance of the story is not the winner the GOP seems convinced it has.

The facts show that an American embassy in the middle of a global hot spot was attacked and an ambassador was killed, a tragedy, to be sure, but considering the context, not something entirely shocking. Libya is a war zone, after all. In the early days after the attack there were conflicting accounts of what precipitated the event. The conventional wisdom says the administration insists this was because of the fog of war while the right says there was a coverup designed to keep the American people from seeing it as a terrorist attack. That's it. Keep in mind that this isn't a scandal over an attack like 9/11 when thousands of civilians were killed on American soil. It isn't on the scale of the war with Iraq being sold on false premises and faulty intelligence. It isn't even about earlier attacks by al-Qaida on foreign embassies where hundreds were killed, known as "the embassy bombings." (Indeed, attacks on embassies are not all that unusual and happened with some frequency during the Bush administration with virtually no comment.) In fact, this isn't even really about the attack in Benghazi. It's about Benghazi!™ --- the brand name for the latest Clinton scandal. This follows their previous successful product lines called Whitewater!™ and Monica!™ (There are various seasonal permutations of these brands, like Cattle Futures™ and Chinagate™ but they all pretty much taste the same.)

The point of this strategy isn't to bring down a politician with one scandal although they'd be perfectly happy if it did. These are such small-bore narratives that they know it's unlikely. No, the point is to create an atmosphere of scandal, a sense that something's not right, even though the worst they can prove is that there was miscommunication or confusion. (That becomes part of the narrative as well -- a sign of incompetence.) It's all in service of manufacturing a sense among the people of "where there's smoke there's fire," something into which anyone can be seduced when a byzantine, contentious scandal is in the news. Regular folks have better things to do than parse official statements or, frankly, even read long explanations by good clear-thinking journalists. (And let's face it, if a scandal takes off, the ranks of good, clear-thinking journalists thin considerably.) If the scandal-mongers can keep it going long enough and can find enough hooks to reengage on a regular basis, it takes on a life of its own.

Benghazi!™ is about portraying the Obama administration as being wimpy on terrorism, of course. But think about that for a minute. The Obama administration is the one that killed bin Laden and is taking down terrorists --- and anyone who might accidentally look like one, which is a whole other story --- with drone strikes all over the Middle East and Africa. (It's true that he's failed to invade a random country just to prove America's manhood, but he's still got a couple of years.) The sad truth is that the Obama administration has made not one single move on terrorism with which the right would normally quarrel. But they simply cannot admit that this or one of their most important organizing principles is off the table: National security is as fundamental to them as low taxes and gun rights. If Democrats are not lily-livered cowards hiding beneath the camo-costumes of Real Americans, then they are missing a huge piece of their argument. So they're doing what it takes: They're making a national security scandal up out of whole cloth.

But this isn't about Obama, not really. They have another Clinton to kick around and her involvement in Benghazi!™ as secretary of state gave them a perfect opportunity to dust off the old scandal sheet music and brush up on those old songs. They're hoping that the mere sound of it will set off a Pavlovian reaction in independent voters and older Democrats who cringe at the prospect of a replay of the '90s. And if the worst should happen and Clinton does get the nod, it's the gift that keeps on giving. They will very likely control the House and we can expect to see many more "select committees" to investigate Republican hallucinations.

It beats governing. And by that time nearly half the country will already believe that Hillary Clinton ordered the attack on Benghazi in order to cover up her involvement in something even worse. They won't know exactly what that is, but where there's smoke there's fire and this just doesn't pass the smell test. No doubt Dick Morris will write a book about it.