It's not easy being black on "Saturday Night Live"

The only problem with Leslie Jones's "SNL" bit, writes W. Kamau Bell, was her audience 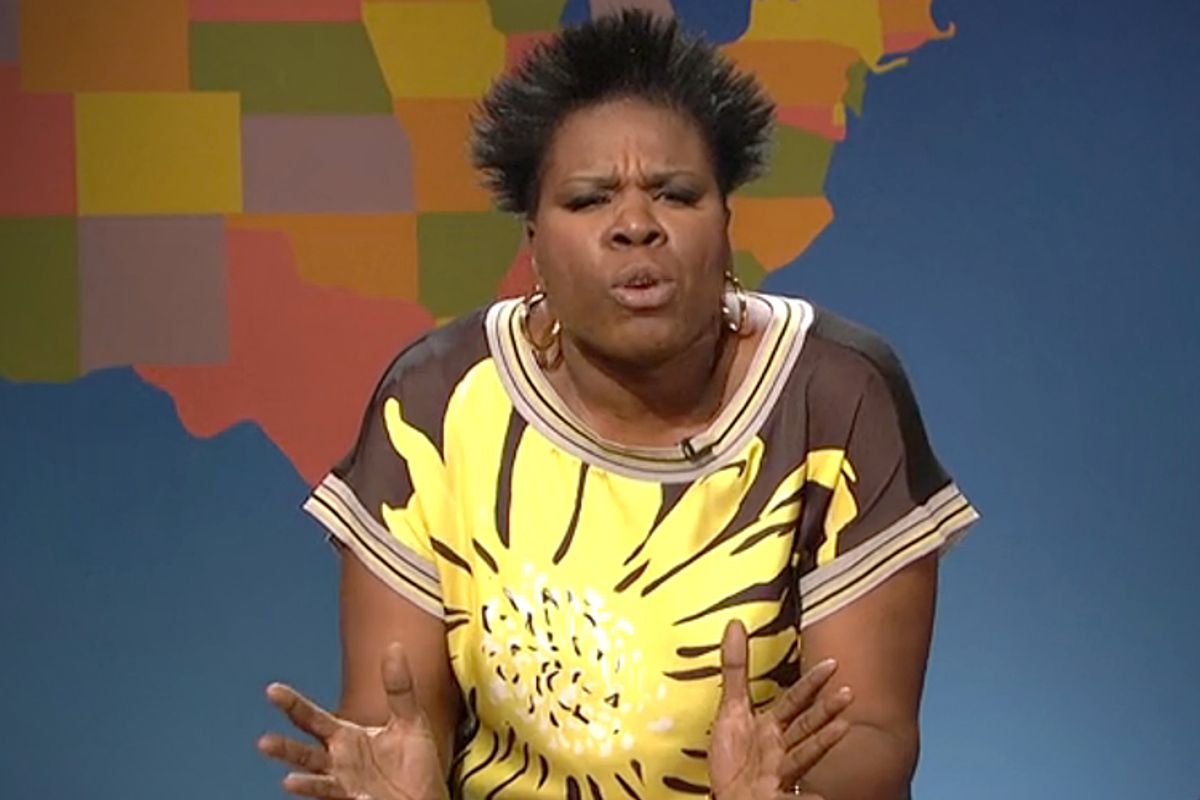 After watching Leslie Jones’ "Weekend Update" appearance on "Saturday Night Live," one thing remains crystal clear. From Garrett Morris to Leslie Jones, it never gets easier being black on "SNL." Hundreds of thousands of words have been written about "SNL’s" black problem. Usually it’s that "SNL" doesn’t have enough black people… or they don’t know how to use the ones they have. But this is different.

Much of the outrage surrounding Jones' appearance (we really need a better word for being mad on the Internet than “outrage”) has focused on the bit itself, either it being funny or not funny. It happens every week, in real time, during "SNL," on social media. That is totally fair. (Although some of the outrage has used words like “coonery” which is totally fucked up.) But I would say that the real sticking point with this bit is the audience.

The challenge that I had when I watched Leslie’s bit wasn’t about the bit itself. I laughed several times. Sometimes it was that “Ouch!” laughter. But I’m a fan of that. My real challenge was the old black trope of, “Uh oh! White folks are seeing her do this!” When I watched the bit I kept thinking about white people. And thinking about white people doesn’t make any activity better, unless your activity is “Thinking About White People.”

I was thinking about the white people who (I’m sure) make up the vast majority of SNL’s studio audience, the white people who (definitely) make up the vast majority of the TV audience, and the white person (Colin Jost) who was sitting next to Leslie during the bit. I took a scientific poll of myself, and I determined that it just felt like too many white people were watching her bit. Especially for a bit as potentially (and actually) incendiary as the one Leslie did. I didn’t trust that those white people understood the historic context behind the bit. I didn't trust that it wouldn’t lead to frat boys walking up to black women with Afros and saying, “I’d totally do you over Lupita Nyong’o!... Hey! Where you going?”

IMHO, context is what made Leslie Jones’s bit seem weird to some (like me) and offensive to others. Imagine, just for a second, that instead of Chris Rock taping his classic (CLASSSSSSSSSSIC!) bit, “Niggas vs Black People,” in Washington, D.C., in front of what appears to be a mostly black audience, that he had taped that bit on "SNL"… at the "Weekend Update" desk…. next to Norm MacDonald… right after another Norm joke referencing Frank Stallone. Would it have been as immediately heralded as a new high in cultural criticism and satire? Or would Norm’s awkward laughter and the studio audience’s “whiteness” have made it harder to focus on the brilliance? In fact, I vote that Rock’s bit is better on HBO because we can see through all the audience reaction shots that black people are fully (FULLY!) onboard. (I do think the bit would have killed with "SNL’s" audience too, but the laughter would’ve been more “REEEEEALLY?” instead of the black audience’s laughter of “YES!!!”)

There’s an interesting thing that happens when POC experience entertainment. We feel like if we are the only ones “in the room” — whether that “room” is an actual room like a comedy club, or a TV taping, or just the “room” that exists when the majority of the TV viewing audience is black. (See: Fox’s 90’s sitcom “Living Single”.) When we feel like we are the only ones privy to the material and the person onstage is one of us, then we will laugh harder, celebrate louder, and applaud more ferociously than if we feel like we are being watched by white folks. Why is that? Well actually it has to do with that whole slavery thing and how white people were literally watching us all the time and us feeling like we couldn’t relax. No, most black Americans today aren’t slaves, but slavery is like phantom limb syndrome. Even though it’s gone, we can still feel it.

The laughter that POC have when we are amongst ourselves is like the drive home after you have Thanksgiving dinner with your relatives. When you get in the car you can finally say, “What the fuck is up with grandma?” But Leslie basically said, "What the fuck is up with grandma?" in front of grandma! (Colin Jost makes a great grandma.) And if you don’t believe me that black people react bigger when we are “alone”? Watch any episode of “Showtime at the Apollo” from the late '80s/early '90s. If you don’t see that black woman in the front row get up less than four times, I’ll eat Pharrell’s hat.

And we (black people) love to give ourselves the luxury of feeling like we are the only ones watching — even if we empirically know it is not true! And I believe if Leslie Jones had done her bit on “Comic View” or “Def Comedy Jam” or at a random Sunday on Hannibal Buress’s night at The Knitting Factory in Brooklyn — where there are a ton of white people, but the lens through which they watch is BLAAAAAACK! — she would have killed! And she may have been heralded as one of our (black people’s) favorite types of comedians, one who goes there! But because of the venue and the audience, it felt weird. Well, here’s hoping that Leslie Jones continues to make it weird at 30 Rock, because I certainly prefer this take on a black woman and all the "ouch" she brings to Kenan Thompson's take in assorted wigs and dresses. #TeamLeslie.

W. Kamau Bell is a socio-political comedian who is the host of the upcoming CNN travel show "The United Shades of America" and the co-host of the podcast "Denzel Washington Is The Greatest Actor of All-Time Period."