"24: Live Another Day": The return of America's bad dream 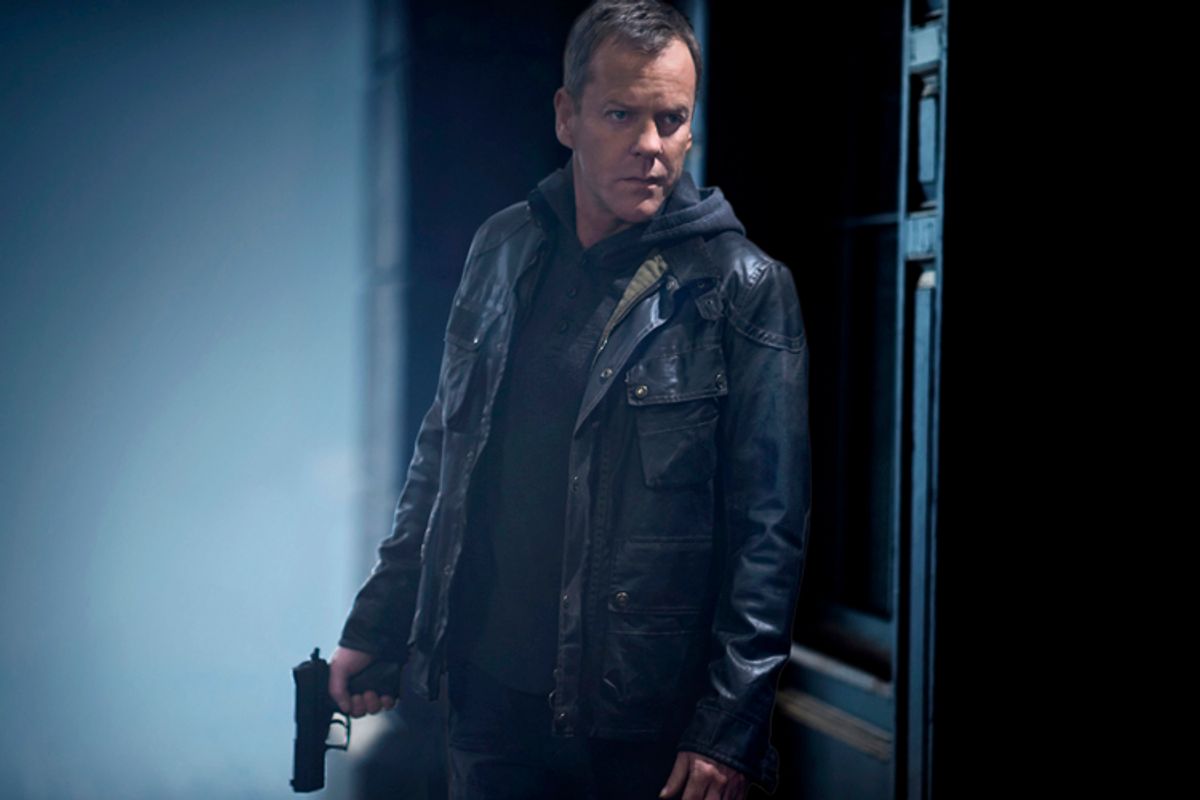 The Intrepid is a museum of military history floating in the Hudson River, stocked with artifacts of American warcraft (like the old Battleship Intrepid). As such, it was the perfect place to premiere a new season of “24.”

On Friday night, a crowd comprised largely of sponsors gathered for a screening of episode 1 of “24: Live Another Day,” which aired on Fox last night. (The ads for Sprint and Chrysler garnered more, and more ardent, applause than did the episode itself.) Wandering among the sponsors gorging on steak and garlic mashed potatoes beside old military technology, it was hard not to feel as though the greatest display of American military might had just appeared onscreen.

The old “30 Rock” joke about NBC wanting to return to 1997 “by science or magic” may as well be applied to the Fox network in 2014. Fox stuck by its old workhorse “American Idol” through thick and thin, hyping cast changes (ladies and gentlemen, Harry Connick, Jr.!) as though they signaled a rebirth rather than amped-up desperation. And now they've revived “24.” There’s a line between a lack of new ideas and a dangerous fealty to ideas that have expired, and Fox appears to have crossed it.

Comparing "American Idol" and "24" might be a stretch, but they both feel inextricably like a product of the early-to-mid-2000s. "Idol" spoke to the myth of upward mobility that underpinned the Bush years; "24" captured the climate of jingoism tinged with paranoia. (Jack Bauer and the rest of the “24” crew were always on at least orange alert.) But, aside from the superfans who stuck by “24” until its eighth and final season, who would be excited to watch a counterterrorism series whose pilot coyly opens on a shot of a mosque, and then never mentions Muslims again?

This is “24's" game -- to back delicately away from the political debates it incites. And it seemed a lot more harmless when everyone else was doing it. “24” was a television series that openly advocated for torture because its hero, Jack Bauer (Kiefer Sutherland) was so particularly successful at obtaining information through those methods. But torture, generally, is bad; only good people can be trusted with it! So in the first episode of the new season, Bauer is threatened with torture by government agents but evades it, going on a rampage through a CIA field office in London -- for some reason -- in order to rescue an old friend who herself is undergoing extralegal methods of information-extraction. The real-time device underpinning the series amps up the tension -- but the sequence is comprehensible with no exposition only if we assume that Bauer, an avatar of individualism and free-agency, is right, and the agents of the U.S. government are not just wrong but automatically evil.

It’s a message that may well have currency to a lot of people -- it’s not as though the government is particularly popular right now among huge swaths of the population. But Bauer’s violence and his rage seem, here, entirely unwarranted. Whether or not a “Billy Jack”-style vigilante entertainment airing weekly on one of the major broadcast networks is threatening to you or appealing relies on your memories of the Bush administration.

Back then, “24” was as mainstream as it gets -- not merely a consistent ratings winner but an awards magnet. But as America grew tired of the Bush wars, it got tired of “24” -- the little-heralded final(-ish) season aired in 2010. The show had its devoted fans, but casual viewers had moved on. Now those casual viewers, should they tune in, will discover that one of this season’s major characters is a blonde CIA operative who trusts her instincts over empirical evidence. Yes -- “24,” a series whose writers went on to create “Homeland,” is now taking its cues from the Showtime series. But “Homeland,” inartful though it can be, makes the case that the U.S. intelligence apparatus is a wildly imperfect system. “24” seeks to reassure us of this -- the government is evil when it’s not incompetent (the new “24” president appears to be quite literally stricken with dementia) and only a great man, willing to do bad things in our name, can set it right.