8 charts that show the terrifying reality of how climate change is affecting the U.S. 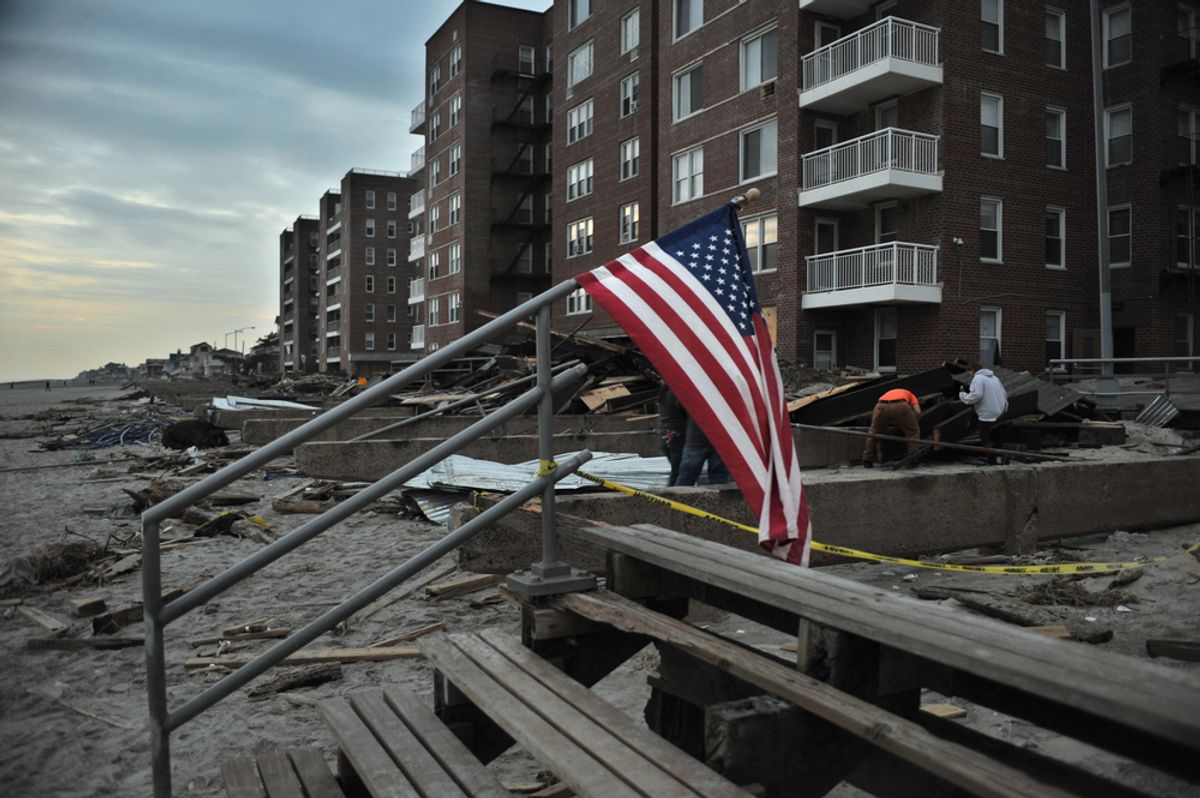 The aftermath of Superstorm Sandy at Rockaway Beach (Anton Oparin/Shutterstock)
--

The White House today released a very big, very important report on climate change. An update from the U.S. Global Change Research Program, the third National Climate Assessment is a detailed, 1,300-page compendium, compiled by over 240 authors, of how climate change is impacting the United States, broken down by region and touching upon nearly every aspect of our society: White House senior counselor John Podesta called it the "most authoritative and comprehensive" report of its kind issued so far. It's as startlingly clear look at how climate change is already affecting us, and what's likely to happen in the future if warming isn't significantly mitigated.

"Climate change is already affecting the American people in far-ranging ways," begins the official compilation of the report's highlights.  Libertarian and conservative think-tanks that shall remain unnamed are already protesting that the report downplays the positive impacts of climate change -- although it does acknowledge them (for one, we'll expend less energy heating buildings in the winter). It also has a lot of suggestions for how we might adapt to the already inevitable effect, such as by taking advantage of the lengthening growing season to plant more diverse crop rotations. But it doesn't pull punches in demonstrating some of the most negative impacts -- threats to everything from water supply to biodiversity to human health are included.

There's a lot in there, but, the authors write, the compilation of peer-reviewed scientific observations and models together "tell an unambiguous story: the planet is warming, and over the last half century, this warming has been driven primarily by human activity." Below, eight highlights from the report illustrate the widespread impact of that reality: Crushing heat waves are becoming far more frequent, too, occurring at triple the historical average. Hotter days mean more evaporation, worsening the impacts of droughts even when there isn't a significant decrease in precipitation. The hottest days will indeed get hotter: the number of days in which the temperature exceeds 100 degrees Fahrenheit are expected to increase. Days with temperatures over 100 degrees during 2011 (NOAA NCDC) When rain does fall, it'll more often come in the form of a deluge. “Once-in-five-year” heavy precipitation events – two-day precipitation totals that are exceeded, on average, only once in a 5-year period – are becoming more common. The flooding, mold growth and sewage overflow that occurs as a result up our exposure to dangerous diseases. Observed U.S. trends in heavy precipitation (Kunkel et al. 2013) It's bad enough that the intensity, frequency and duration of North Atlantic hurricanes have increased since the early 1980s; Hurricane Katrina is cited as one example of the "multiple system failures" that can occur during extreme weather events that make their impacts particularly severe. The "Katrina Diaspora" also illustrates the wide-ranging impacts that can flow from local disasters. Location by zip code of the 800,000 people displaced by Hurricane Katrina (Kent 2006) Among the many potential impacts on human health, from smoke inhalation tied to wildfires to the mental health impacts caused by those more intense, more frequent natural disasters, we have this projection of note: three climate factors -- temperature, precipitation and humidity -- together influence development of the Lyme disease bacterium and the ticks that host it. Projected changes in tick habitat (Brownstein et al. 2005)

The effects of climate change are expected to significantly increase water demand across the country. Some of the largest increases projected to occur in the Great Plains and parts of the Southwest and Southeast, which rely on groundwater aquifers as their main source of water. Increased demand, plus declining recharge rates (deluges aside, increased dry spells and intensified short-term droughts are expected) will make them an increasingly unreliable source. Map: Projected changes in water withdrawals (Brown et al. 2013)

Crop and livestock production is already being disrupted by climate change; by mid-century the impacts on most will be increasingly negative. All stages of food production may be affected, posing a serious threat to food security in the U.S. as in throughout the world. Corn and soybean crop yields in Illinois and Indiana decreased with increased temperatures (Mishra and Cherkauer 2010) In terms of the number of buildings lost, the 25 most destructive fires in California history got a lot more destructive with time. The report points to changes in wildfire occurrences and in residential locations as “one example of how changing development patterns can interact with a changing climate to create dramatic new risks." Buildings lost to wildfires at California wildland-urban interfaces (Stephens et al. 2009)