Girls’ abductions a last straw for Nigerians: Government needs to get serious in protecting residents

The dreaded insurgent group, Boko Haram, has a history of previous abductions -- but still many questions remain 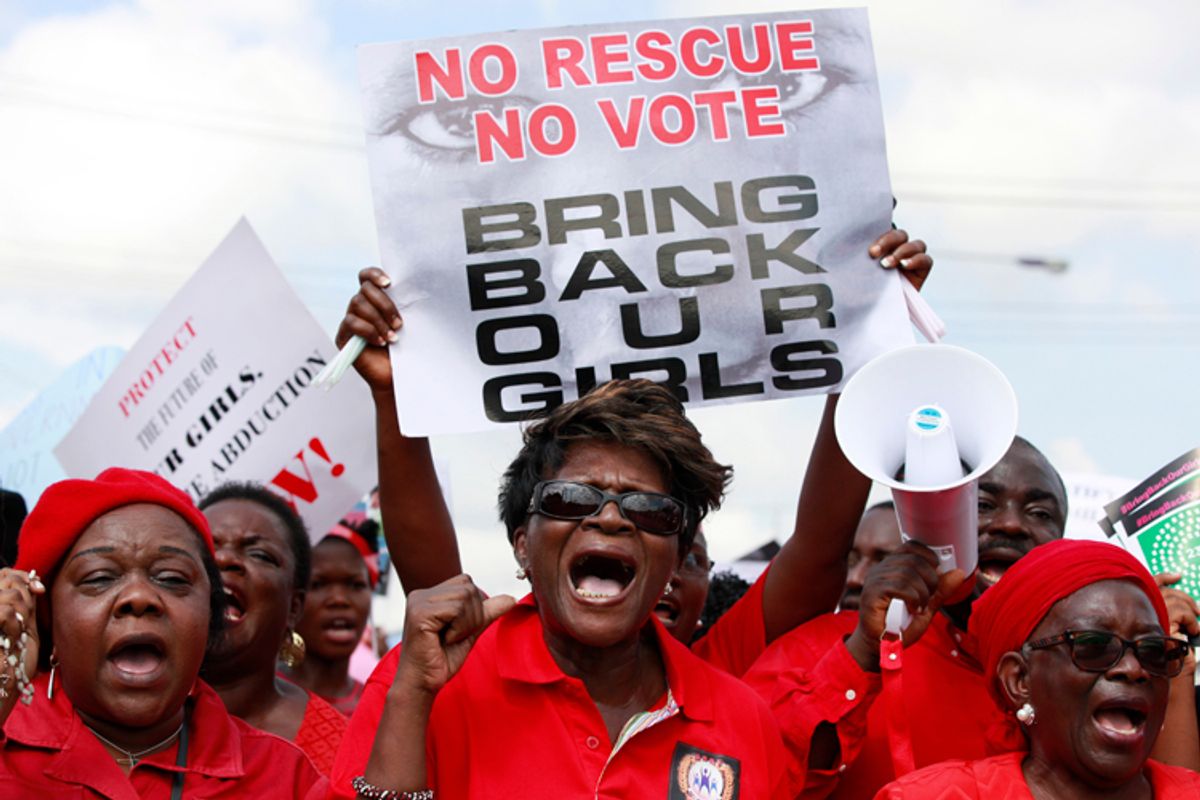 ABUJA, NIGERIA -- The images of sorrowful parents, weeping profusely and brokenly asking when their daughters would be rescued, have struck a chord across Nigeria. The murmurs of discontent swelled with the government’s confused and inadequate responses to basic questions about the abduction of more than 276 girls from their secondary school by suspected Islamic militants. The frustration reached a crescendo when unconfirmed rumors surfaced that the girls might have been sold into marriage to members of the militant group for a $12 dowry.

Social media groups organized around the Twitter hashtag #BringBackOurGirls have demanded government action. Women’s groups and other concerned people have joined in solidarity with the grieving parents. Defying the pelting rain that soaked their red dresses and turned their posters into wet blobs, hundreds of people marched to the National Assembly in Abuja last Wednesday. Similar rallies have taken place in Kano and Lagos and in various cities around the world.

The abductions late in the evening of April 14, the same day an early morning bomb blast  killed more than 70 people in  a suburb of Abuja, was too much tragedy for most Nigerians. The dreaded insurgent group Boko Haram, which claimed responsibility for the deadly explosion, is also suspected in the abductions.

The Girls’ Secondary School in the town of Chibok had been closed since February along with all schools in Borno state after threats from Boko Haram. The school had reopened just so the girls could take their final exams. Disguised as security forces, Boko Haram apparently lured the girls into their vehicles. When the insurgents set fire to the school buildings and shot and killed a soldier and a policeman guarding the school, the authorities determined that they were most likely Boko Haram in disguise. Some of the girls managed to jump out of the moving trucks by holding onto low-hanging tree branches, while a few later escaped from the insurgents’ camp in the Sambisa Forest Reserve, 40 kilometers north.

Boko Haram, which roughly translates as “Western education is forbidden,” has either claimed responsibility or expressed support for previous attacks on schools in Nigeria’s beleaguered northeast region. In February, male students of the Federal Government College, in Buni Yadi, were killed, while the girls were ordered to leave school and get married. In Konduga in Feburary, unidentified gunmen abducted at least 20 students of Girls Science Secondary School, as well as five girls selling goods on the street.

In November, Human Rights Watch documented Boko Haram’s abduction of several girls and women, snatching them off the streets or public transport vehicles, or from their parents, throwing money at them, presumably as a form of dowry. Some of the girls later returned home, either pregnant or with babies.

Abubakar Shekau, the Boko Haram leader, threatened a year ago to embark on a series of kidnappings of women and children in retaliation for the arrest and detention by security forces of the wives and children of insurgents, including Shekau’s. In response, the Nigerian government, under the banner of its then-proposed dialogue program, released 96 women and children between May and July. Security forces, working with local vigilante groups, also claimed to have rescued several women following raids on the group’s camps in Borno State. This March, Shekau repeated his threat when hundreds of insurgents were killed during an attack on Giwa Barracks in Maiduguri.

It is difficult to understand, however, why Boko Haram, which has claimed responsibility for the abduction, would target this particular school. It could be that the insurgents considered the reopening of the school so close to a Boko Haram camp an affront. Or it may just be that, because of their constant movement, the insurgents needed a new supply of women and girls to take care of their domestic and sexual needs.

The Chibok abduction is one of many blamed on the insurgents, but it is unique in its scale and style, and the conflicting reports about the exact number of girls involved and whether any had been rescued by security forces.

The question for many Nigerians is where the security forces were when the gunmen sacked the town and then the school over a four-hour period. In addition, the short journey to Sambisa apparently took 48 hours because the insurgents’ trucks kept breaking down.

The protest marches are a statement that Nigerians have had enough of the government’s inability to combat the murderous scourge of Boko Haram. The government urgently needs a strategy for protecting its residents that respects everyone’s rights, including protesters. And it needs to address -- finally -- the systemic issues of corruption, poverty and impunity that have fueled this kind of violence against schoolgirls.

Mausi Segun is the Nigeria researcher at Human Rights Watch, based in Abuja.