Want to know who's leading the right's new bit of theater? This clown might make you miss Darrell Issa 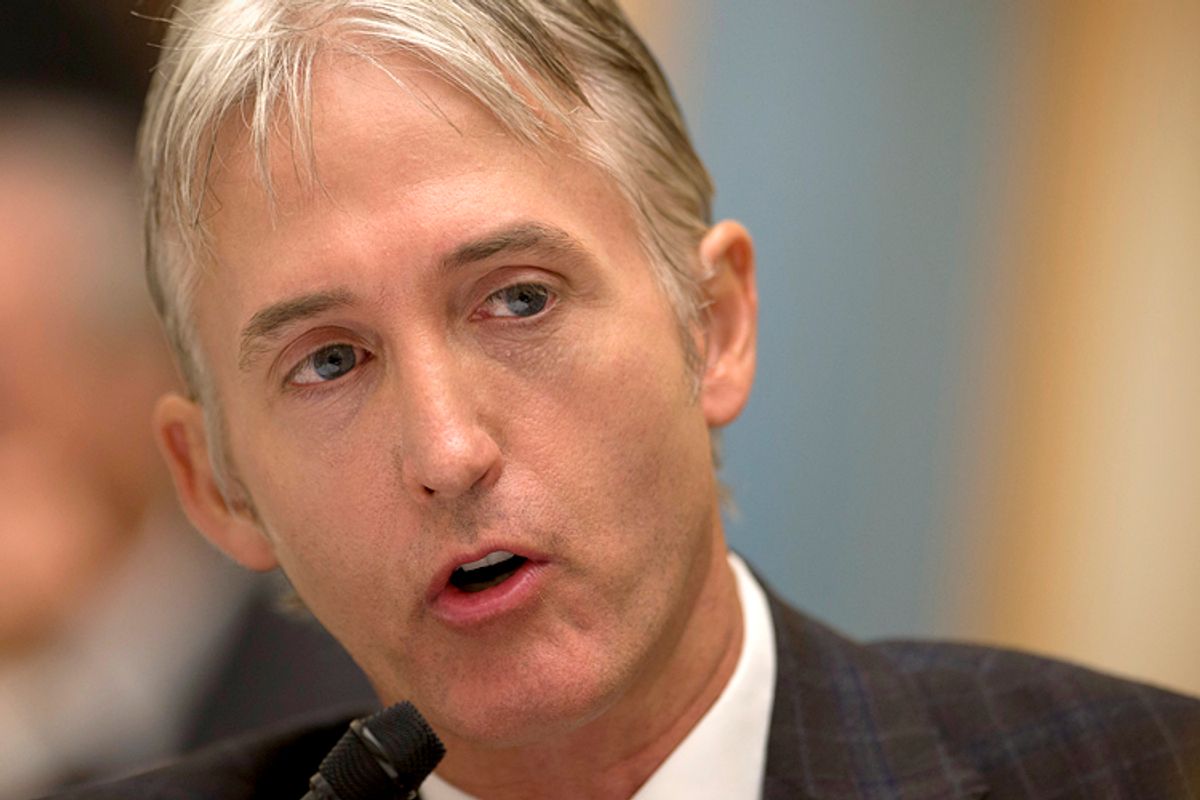 When John Boehner finally buckled to pressure from his members and announced the creation of a House select committee to investigate Benghazi, there was never really any doubt that the real purpose of the whole exercise was to keep the Benghazi attacks alive as a political issue. Yesterday Boehner confirmed that our collective cynicism was justified when he tapped Rep. Trey Gowdy to be the committee chair.

If you’ve ever actually sat down and watched a hearing of the House Oversight Committee, on which Gowdy sits, then you probably have a pretty good idea of the South Carolina Republican’s approach to oversight: badger witnesses as aggressively and theatrically as possible, force them to answer questions for which there is no actual answer, post a video of his performance on YouTube, then go on Fox News.

Just in case you think I’m exaggerating, here’s a YouTube video the congressman posted of himself upbraiding former IRS official Lois Lerner for pleading the fifth at an Oversight Committee hearing. The content of Gowdy’s statement was dramatic enough, but it was still missing that added bit of flair, so he kicked it up a notch by adding a generic action-movie soundtrack.

Gripping stuff! As a member of the Oversight Committee, Gowdy has had no shortage of opportunities to preen for the cameras when Benghazi is on the docket, styling himself as an aggressive interlocutor while determinedly steering clear of any constructive observations.

Here’s a clip of Gowdy interrogating Admiral Mike Mullen, one of the co-authors of the State Department’s Accountability Review Board, which investigated and issued a report on the Benghazi attacks in late 2012. I should preface this by pointing out that earlier in the hearing, Thomas Pickering, also on the ARB, had testified that they didn’t interview Secretary of State Hillary Clinton for their investigation because decisions related to Benghazi security were made below her level. Gowdy says “I understand you didn’t interview Secretary Clinton,” then repeatedly asks Mullen what Clinton knew about the minutiae of Benghazi, leaving an increasingly frustrated Mullen to explain that they didn’t interview Clinton.

Gowdy’s intention behind this line of questioning was twofold: to say “Clinton” as many times as he could during a Benghazi hearing, and to get the Trey Gowdy brand out there. And he was largely successful at both. Being a shouty malcontent has given Gowdy a reputation as a dogged investigator. “Gowdy brings prosecutor's zeal to Benghazi probe,” declared USA Today after Gowdy received the select committee chairmanship.

Speaking of prosecutors – did you know Trey Gowdy was once a prosecutor? If you do, then it’s likely because you’ve heard Trey Gowdy mention this Trey Gowdy fact at some point. Comb through the transcripts of the Oversight Committee’s hearings on Benghazi and you’ll find example after example of Trey Gowdy talking about Trey Gowdy’s former life as Trey Gowdy: Prosecutor.

Here he is at the Oct. 10, 2012, hearing on Benghazi: “Mr. Chairman, you know that in a former life, I spent a little time in the courtroom. So when I hear the phrase ‘concrete evidence,’ it means something to me.”

And here’s he is again at the May 8, 2013, hearing on Benghazi: “I was an average prosecutor, but I did it for a long time. So let me ask you this. Are you aware of any crime scene that is improved with time?”

And here once more at the Sept. 19, 2013, hearing on Benghazi: “Well, in conclusion, Admiral, let me just say from my previous life, I well understand having bad witnesses. I've had plenty of cases where I wish I could have picked them, but I couldn't.”

So this assignment is pretty big for Gowdy, in that all his self-aggrandizing and peacocking have finally paid off, and now he’ll have a larger stage than ever upon which to strut. For the Republicans, his selection makes sense since he’s pretty good at putting on a show that sort of looks like oversight but is really just posturing and nonsense that will draw lots of attention from the press.

And in the end that’s really all the GOP wants when it comes to Benghazi: to have people talk about it.