Jack Bauer has become a different kind of hero

The "24" hero returns for a ninth season, surrounded by the moral ambiguity of a new political age 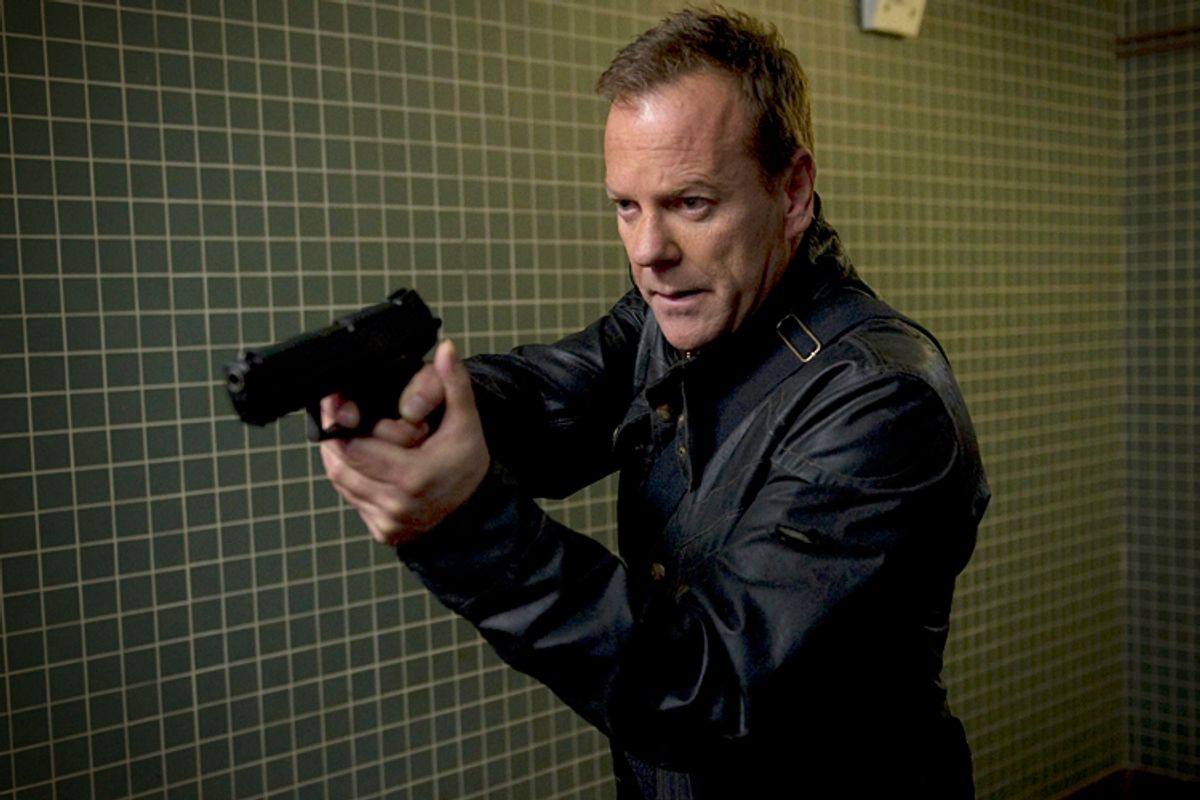 It is sort of brilliant that “24: Live Another Day” takes place in the UK, and not just because the grim, gray streets of Europe have become the go-to destination for craggy old action heroes with very specific skill sets (“Taken 2,” “A Good Day to Die Hard”). There’s a scene in “Live Another Day” in which Chloe O’Brian (Mary Lynn Rajskub) is questioned about her recent escape from a maximum-security CIA blacksite in London. When she reveals that a former colleague broke her out, her interrogator believes that to be impossible. Chloe responds, “Not for him.” And, of course, it is not. If Doctor Who is the UK’s Superman, than Jack Bauer is our Doctor Who: immeasurably talented, self-righteous, unorthodox and utterly implacable.

It has been four years since the last iteration of the hit series “24” went off the air, and “Live Another Day” boasts a newish veneer. The location is new. The villains – ambiguously motivated and partially obscured – are new. (Full disclosure: Actor Gbenga Akinnagbe, who plays hotheaded CIA agent Eric Ritter, is a good friend of mine and one of the stars of “Big Words,” a film I wrote and directed.) Where, at the end of “24’s” eighth season, an unmanned drone was the angel in the sky that ultimately saved Bauer from being assassinated, drones are now – reflecting what appears to be the prevailing opinion of our time – irrefutably evil tools that will inevitably fall into the wrong hands and be used to slaughter innocents. Chloe, always a cog in the machine even as she helped Jack Bauer thwart its worst manifestations, has fallen in with the Robin Hoods of our day, a band of Edward Snowden types who heedlessly disseminate classified information to the public in the interest of truth.

Chloe’s disillusionment and reorientation are reflected in her revamped appearance, a “Girl with the Dragon Tattoo” affectation that, hopefully, is not intended to be convincing or permanent. But it is Jack Bauer who has emerged from exile anew. He seems harder, more dead-eyed and resolute. He can still take a beating like no else, but now he can steel his body against sensors and electronic lie detection. He can’t travel back in time, but time is his constant nemesis, and he is always wrestling with ghosts from his past – Audrey Heller, anyone? Regeneration is at the core of the Who mythology. The Doctor is a misunderstood rogue who values justice, sometimes above the safety of his closest companions, and is always willing to push himself literally to death in its service. In the case of his actual death, he just regenerates, as he has done 11 times in the history of that show and as Jack Bauer seems to do at the end of every season. Jack always succeeds, but at some severe cost whether it be disgrace, ostracism or the indelible sting of personal loss. When he is needed, he is reborn, usually with new concerns, new allies – even new tics – but always the same heroism.

The original creators of “Doctor Who” put a cap on the number of times their hero could regenerate – 12. Eleven doctors and counting, that successful franchise doesn’t seem to be going off the air anytime soon, and there’s no telling how the showrunners will circumvent that rule. Similarly, if this new “24” has a stellar season, who knows how many chances Jack Bauer will get to reset the clock. A better question is, For how long can one man convincingly do good for good’s sake?